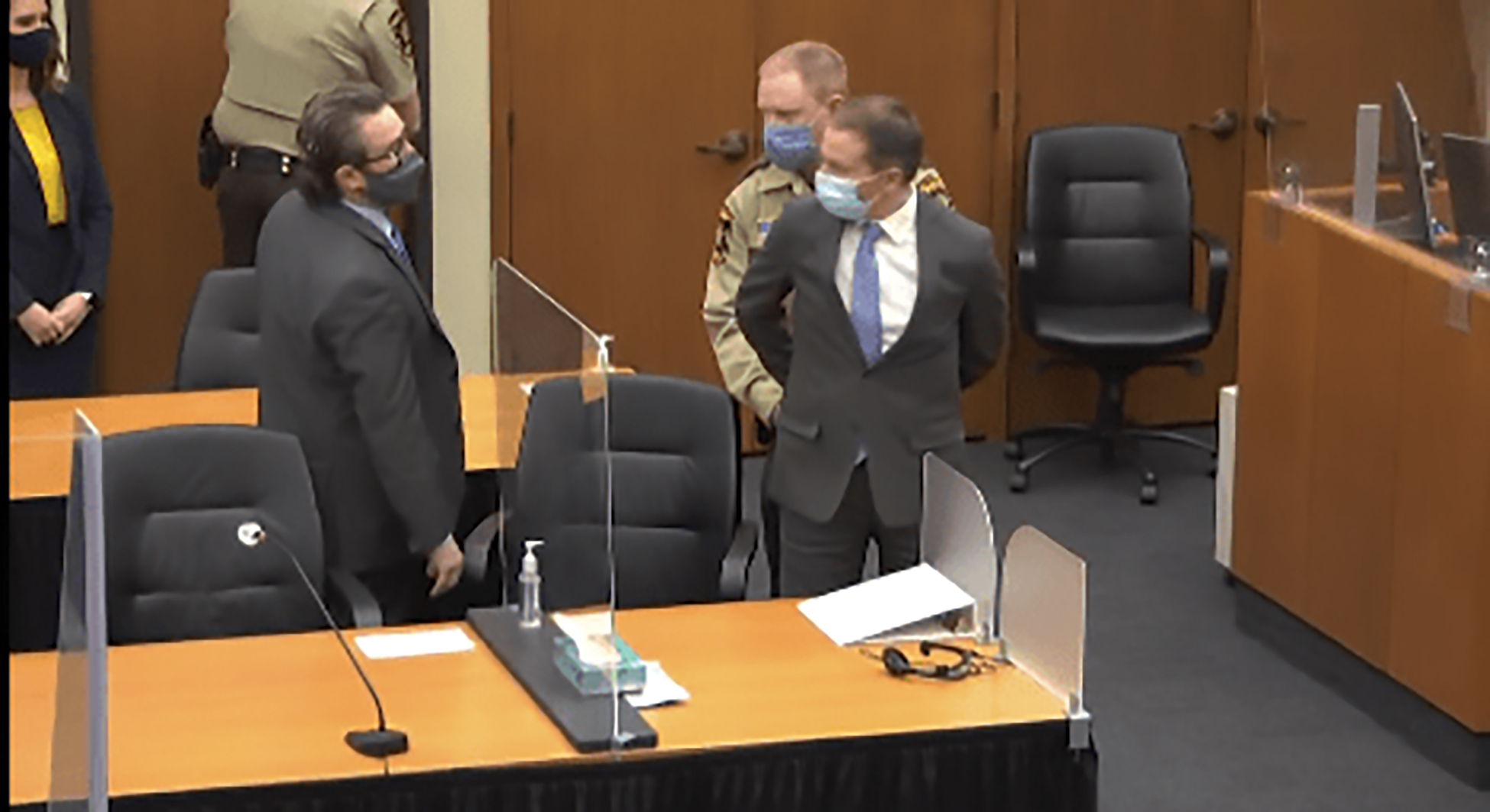 A Hennepin County jury on Tuesday found ex-Minneapolis police officer Derek Chauvin guilty of murder and manslaughter in the killing of George Floyd.

In one of the most consequential verdicts in Minnesota history, Chauvin was found guilty on all counts, including second-degree unintentional murder, third-degree murder and second-degree manslaughter in Floyd’s killing last May.

Chauvin was led away in handcuffs after the verdicts were read.

Chauvin was one of several officers called to a south Minneapolis street corner May 25 on a report of a man allegedly using a counterfeit $20 to buy cigarettes at a local store. He arrived to find other officers struggling to arrest Floyd and get him in a squad car as Floyd pleaded that he was claustrophobic.

The encounter turned fatal as officers pulled Floyd to the ground to subdue him during the arrest.

Bystander video captured Chauvin with his knee pressed against Floyd’s neck for more than nine minutes as the man lay pinned to the street, handcuffed and face down, pleading that he couldn’t breathe while people shouted from the curb that Floyd was dying.

Weeks of trial testimony revolved around a basic question: Who or what was responsible for Floyd’s death? The defense pointed to Floyd’s health conditions and the drugs in his system. The prosecution put the blame on Chauvin’s actions and his knee on Floyd’s neck.

Chauvin and three other officers were fired over the incident. The other officers have been charged with aiding and abetting. They’re expected to go on trial this summer.

Gov. Tim Walz called the verdicts “an important step forward for justice in Minnesota. The trial is over, but our work has only begun.”

Minnesota, he added, must work to rebuild confidence between police and communities of color. “Too many Black people have lost — and continue to lose — their lives at the hands of law enforcement in our state,” an apparent reference to the recent killing of Daunte Wright by a Brooklyn Center officer.

Tensions remained high in the Twin Cities and across the country during the trial and the jury’s deliberations.

The image of a white police officer who appeared indifferent to the suffering of a Black man under his knee begging for mercy made race an inescapable part of the story. Weeks earlier, the city of Minneapolis settled a wrongful death lawsuit with the Floyd family for $27 million.

State and local leaders appealed for calm prior to the verdict, deploying National Guard troops and bringing state troopers from Nebraska and Ohio to supplement an already historically large law enforcement presence.

‘He betrayed the badge’

On the stand in early April, Baker stood by his findings and described Floyd’s health problems and the drugs in his system as contributing — not direct — causes of his death. Chauvin’s actions, he said, “tipped (Floyd) over the edge” from life to death.

Defense attorney Eric Nelson worked to sow doubt in the jurors’ minds as he recounted Chauvin’s actions and Floyd’s health problems, including compromised arteries and an enlarged heart, and the drugs in his system.

He suggested that Chauvin’s concern about the tensions with bystanders watching Floyd’s arrest distracted Chauvin and kept him from rendering CPR as Floyd lost consciousness. Prosecutors pushed back, noting that despite their panic at what was happening to Floyd, the half dozen or so bystanders, including several teens and a 9-year-old girl, obeyed police commands not to interfere.

Prosecutor Jerry Blackwell emphasized that Chauvin and the officers were in complete control of the situation. “He had the bullets, the guns, the Mace that he threatened bystanders with,” Blackwell told jurors Monday. “He had the backup. He had the badge — all of it.”

The defense also urged jurors not to focus on the nine-plus minutes that Chauvin’s knee was on Floyd’s neck but to think about the prior 17 minutes as officers struggled to get Floyd to comply with orders and get in the back of the squad car as Floyd resisted, saying he was claustrophobic.

“Human behavior is unpredictable, and nobody knows it better than a police officer,” Nelson told jurors.

Nelson argued over and again that Chauvin was just doing his job to subdue a suspect within the bounds of Minneapolis police policy and training. But that argument took repeated hits during the trial from a line of officers, including Chauvin’s bosses.

Minneapolis Police Department trainers said they’ve never trained the knee-on-neck technique. The head of the homicide unit testified the use of force officers used on Floyd was “totally unnecessary.” Lt. Richard Zimmerman told jurors that after reviewing the body camera footage of the fatal encounter with Floyd, he concluded the officers went too far.

“Pulling him down to the ground, face down, and putting your knee on the neck for that amount of time — it’s just uncalled for,” Zimmerman said. “I saw no reason why the officers felt they were in danger, if that’s what they felt, and that’s what they would have to feel to be able to use that kind of force.”

Chief Medaria Arradondo testified that once Floyd stopped resisting and then stopped responding, “to continue to apply that level of force to a person, proned out, handcuffed behind their back, that in no way shape or form is anything that is by policy. It’s not part of our training, and it is certainly not part of our ethics or values.”

These were extraordinary moments. Police often rally around fellow officers accused of killing people on the job. The reluctance of officers to speak out against another officer is often called the “blue wall of silence.”

Chauvin declined to testify in his own defense, but he did leave a clue to his mindset at the scene. Prosecutors played footage during the trial from Chauvin’s body camera showing a man at the scene criticizing the officer afterward for the way he restrained Floyd.

“That’s one person’s opinion,” Chauvin can be heard responding to the man on the video. “We gotta put force, gotta control this guy because he’s a sizable guy. Looks like he’s probably on something.”

They were the only remarks heard during the trial from an officer in an MPD uniform justifying the level of force used against Floyd.

Following the convictions Tuesday, experts expressed hope that good officers in Minneapolis and around the country would feel emboldened to call out the bad acts of fellow officers.

“We hope that this is an inflection point. This is something that is different in that police will be held accountable more readily going into the future,” said Mark Osler, professor at the University of St. Thomas.

To have high-ranking officials step out say Chauvin’s knee maneuver “wasn’t consistent with training, and it was a crime. That’s something that we haven’t seen in the past and hopefully that we will see in the future going forward.”

Before Chauvin, only one police officer in Minnesota history had been convicted for killing someone on duty, and it was a Black man who fatally shot a white woman.

Mohamed Noor was found guilty in 2019 of murder and manslaughter in the killing of 911 caller Justine Ruszczyk in Minneapolis. He was sentenced to 12 1/2 years.

Two other law enforcement officers were found not guilty in on-duty killings.

‘There is a man being killed’

Between the officer body cameras, witness videos and footage from municipal and security cameras at Chicago Avenue and 38th Street, Floyd’s killing was perhaps the most documented killing by a police officer in history.

Video of Floyd pleading with officers and his awful stillness after losing consciousness were broadcast to a live audience around the world at points during the trial.

For the people who stood on the curb that day outside Cup Foods, however, reliving the agony of those minutes was at times unbearable. Several broke down in tears testifying during the trial. They spoke of feeling angry and powerless as they watched Chauvin press his knee into Floyd’s neck.

Off-duty Minneapolis firefighter Genevieve Hansen repeatedly urged the officers to let her provide medical attention to Floyd after coming upon the scene in south Minneapolis as she walked home.

She told the court she felt helpless because “there is a man being killed” and in other circumstances in her job, “I would’ve been able to provide medical attention to the best of my abilities, and this human was denied that right.”

“I heard George Floyd say, ‘I can’t breathe, please get off of me. I can’t breathe.’ He cried for his mom. He was in pain, and it was like he knew it was over for him,” she told the court. “He was terrified, he was suffering. This was a cry for help.”

Another teen who took video told the court that she felt like she’d failed Floyd because she couldn’t intervene. “I felt like there wasn’t anything I could as a bystander.”

Donald Williams, one of the most vocal of the bystanders who admonished Chauvin last May, became emotional on the stand, wiping away tears as he heard his voice when the prosecution played audio of the 911 call. “He just pretty much just killed this guy that wasn’t resisting arrest,” he says on the audio, referring to “officer 987,” Chauvin’s badge number.

Another bystander also fell to tears as he testified how he tried to de-escalate the confrontation with Chauvin and the officers as he begged Floyd to get in the squad car.

Charles McMillian, 61, can be heard on video recorded by other bystanders telling Floyd to get in the car and that he “can’t win” as Floyd pleads the officers not to put him in the back of the squad because he’s claustrophobic.