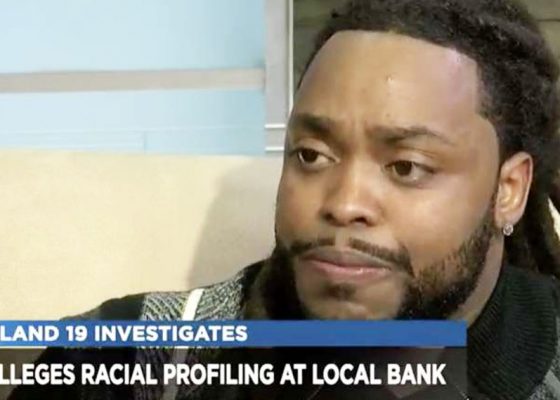 Paul McCowns’s story of “banking while black” is the latest instance of 911 being called on people of color for no reason.

Less than a month into a new job, Paul McCowns went to a bank in Brooklyn, Ohio, to cash his first paycheck. But instead of getting his money, he found himself in handcuffs after bank employees called the police.

It’s just the latest incident in a steadily growing list of black people who have been subjected to 911 calls and police intervention over completely innocuous behavior.

On December 1, McCowns, a new employee at an electric company, visited a local Huntington Bank branch. Since he wasn’t a regular customer at the bank, he was asked to present two forms of identification as well as a fingerprint, and he readily offered all three.

But bank employees were still suspicious of the roughly $1,000 check, and after several calls to McCowns’s employer went unanswered, they declined to complete the transaction. McCowns then left the bank, thinking that was the end of it.

Moments later, a police cruiser pulled in front of him. “I get in my truck and the squad car pull in front of me and he says get out the car,” McCowns told Cleveland 19 News this week.

As McCowns prepared to leave the bank, an employee had called 911, telling police that the man tried to cash a fraudulent check that “does not match our records.”

After being handcuffed and placed in the back of the police cruiser, officers contacted the 30-year-old man’s employer. “My employer said, ‘Yes he works for me. He just started and yes, my payroll company does pay him that much,’” McCowns said.

Brooklyn police released him and confirmed that there was no fraud. McCowns later cashed the check at another Huntington Bank location. “We accept responsibility for contacting the police as well as our own interactions with Mr. McCowns,” Huntington Bank said in a statement this week. “Anyone who walks into a Huntington branch should feel welcomed.”

According to the Washington Post, Brooklyn Police Chief Scott Mielke said that there have been close to a dozen cases of police being called out to that Huntington Bank branch since July, all of which resulted in arrests for fraudulent checks. A bank spokesperson confirmed this, saying that the employees who called the police were simply being vigilant.

But McCowns argues that his treatment was the result of racial profiling, in another story of “Living While Black”: high-profile incidents that have dominated headlines this year involving African Americans being viewed with suspicion and subjected to 911 calls for simply existing in public spaces.

Living While Black stories have been in the headlines for months. They’re still happening.

It’s been eight months since the story of Rashon Nelson and Donte Robinson, two black men charged with trespassing while waiting inside a Philadelphia Starbucks, sparked an increase in media reports of black people facing 911 calls over minor or completely nonexistent offenses.

Since then, there’s been a seemingly endless stream of stories involving calls to police or 911 on people of color for innocuous activities like babysitting white children, mowing lawns, selling water, eating at Subway, and entering their own apartment buildings.

As Living While Black incidents have attracted national attention, the conversation around them has often focused on why police are being asked to respond to situations where they aren’t really needed.

Earlier this year, Paul Butler, a professor at Georgetown Law and the author of Chokehold: Policing Black Men, told me that unnecessary 911 calls can be especially dangerous by putting black people in unnecessary interactions with law enforcement.

“When the police are called on African Americans, it has a very negative impact on those black people, even if they are not arrested, or beat up, or killed,” Butler said. “You’re required to justify your existence and your presence in a white space. It makes you feel like less of a citizen and less of a human being. It’s impossible to overstate the adverse consequences.”

McCowns’s incident is also an example of the struggles of black bank patrons. In November, a black woman named Satara Monroe filed a racial discrimination lawsuit against Wells Fargo, arguing that the bank refused to cash her check and accused her of fraud.

In July, a 78-year-old black woman named Barbara Carroll filed a similar suit against Wells Fargo, saying that she was also accused of fraud and that police were called to the bank over a $140 check. Other stories of black bank customers being confronted by police have received attention in recent years.

After his own “banking while black” incident, McCowns says that he wants an apology from the bank and for a change in how the bank handles customers who don’t have Huntington accounts. “The person who made that phone call — that manager, that teller — whoever made that phone call, I feel as though they were judging,” he told Cleveland 19 News.