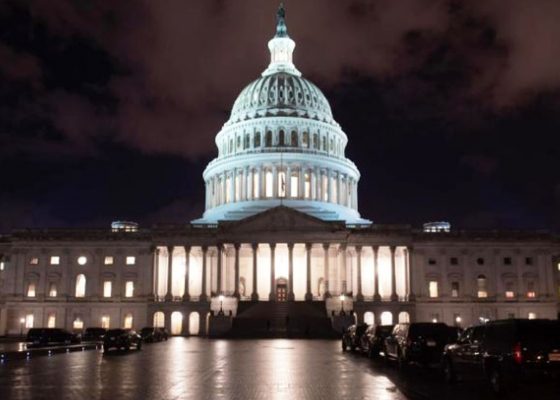 Washington (CNN)A partial government shutdown remains in effect after funding expired for roughly a quarter of the federal government when the clock struck midnight on Saturday — and it is not clear when it will end.

Negotiations between congressional Democrats and the Trump administration over the President’s demands for a border wall have so far not yielded an agreement, making it likely that the shutdown will continue until after Christmas. It is even possible that it could still be underway when the new Congress starts in early January.

Here’s a look at the latest on negotiations and the outlook for the partial shutdown:

How long is the shutdown expected to last?

How innovative partnerships are transforming TV in Abu Dhabi

A media and tech hub in Abu Dhabi is partnering to develop the way we watch TV in the region.

The President’s incoming acting chief of staff Mick Mulvaney said Sunday that “it is very possible that the shutdown will go beyond the 28th and into the new Congress” during an interview on “Fox News Sunday.”

The Senate adjourned Saturday afternoon with no deal to re-open the government, and while there will be a pro forma Senate session on Monday, the next actual session is not scheduled until Thursday.

Lawmakers can travel home for Christmas and won’t have to worry about being called back to vote until a deal can be reached, but GOP leaders told senators that if there is no deal by Thursday, they would not have to return for that session, sources have told CNN.

What are the next possible steps?

There is a remote possibility that a deal could come together sooner, and in the unlikely event a deal is reached by Monday, the pro forma session could be used to pass it by unanimous consent or voice vote, something that would only require one senator to be in attendance.

“If President Trump and Republicans choose to continue this Trump Shutdown, the new House Democratic majority will swiftly pass legislation to re-open government in January,” the Democratic leaders said in a joint statement after the shutdown started.

Where do negotiations stand between the President and Democrats?

The key sticking point in the spending standoff is President Donald Trump’s demand for $5 billion for a border wall. And so far, there is still no agreement to resolve the standoff and re-open the government.

House Republicans passed a spending bill that included an additional $5 billion for the wall last week, but the legislation is considered dead on arrival in the Senate where Democrats have said they would not support it. Any spending bill needs at least some Democratic votes to pass in the Senate.

Vice President Mike Pence proposed spending $2.5 billion on border security, including the wall, in a stopgap spending bill during meetings on Friday night and Saturday afternoon with Schumer, three sources familiar with the matter told CNN.

Several of the sources said there were policy additions and restrictions included in the proposal to try to bridge the gap. But Democrats said the number and the details tied to it aren’t acceptable.

Following the Saturday meeting, a Schumer spokesman said, “The Vice President came in for a discussion and made an offer. Unfortunately, we’re still very far apart.”

Which parts of the government are affected?

But just because a federal department is subject to a lapse in funding, that doesn’t mean that all of its activities immediately stop.

Some affected departments have put out information to explain how the shutdown will play out.

The Agriculture Department said on Twitter that “we will be providing as many of our core services as we can using existing resources.” A press release issued by the department specified that some of the activities that will not stop at least in the short-term include Forest Service law enforcement and emergency and natural disaster response.

An administration official told CNN prior to the shutdown began that “a majority of DHS activities would continue” if there were a lapse in appropriations.

“For instance, those protecting our borders with the Customs and Border Patrol will continue to do so,” the official said.

And despite the fact that the Justice Department will be impacted, special counsel Robert Mueller’s office will be able to continue working.

Mueller’s office “is funded from a permanent indefinite appropriation and would be unaffected in the event of a shutdown,” a Justice Department spokesperson told CNN previously.

How a potential government shutdown could affect holiday plans

How a potential government shutdown could affect holiday plans

Will the shutdown impact holiday travel?

The Transportation Security Administration will be on the job to screen passengers, and Federal Aviation Administration air traffic controllers will be directing planes.

The FAA released a statement saying that “air traffic control is fully operational and there is no impact to safety or FAA oversight for travelers.”

Amtrak, a federally owned corporation rather than a government agency, will be open. Federal Railroad Administration inspectors will also continue to work.

US Customs and Border Protection checkpoints will remain open for international travelers, and the State Department will also continue processing passports.

How many federal workers will be impacted?

An estimated 800,000 federal employees may be impacted by the partial shutdown, either by having to work during it while their pay is withheld until it ends or by being furloughed.

More than 420,000 government workers are expected to work without pay in a partial shutdown, according to a fact sheet released by the Democratic staff of the Senate Appropriations Committee.

That estimate includes more than 41,000 federal law enforcement and correctional officers. In addition, more than 380,000 federal employees would be placed on furlough, according to the fact sheet.

Before adjourning on Friday, the Senate passed a bill to ensure federal employees who are furloughed get back pay. It was passed by unanimous consent, but still will need to pass the House. The measure was brought up by Democratic Sens. Chris Van Hollen and Ben Cardin, who represent Maryland, where many DC-area federal employees live.