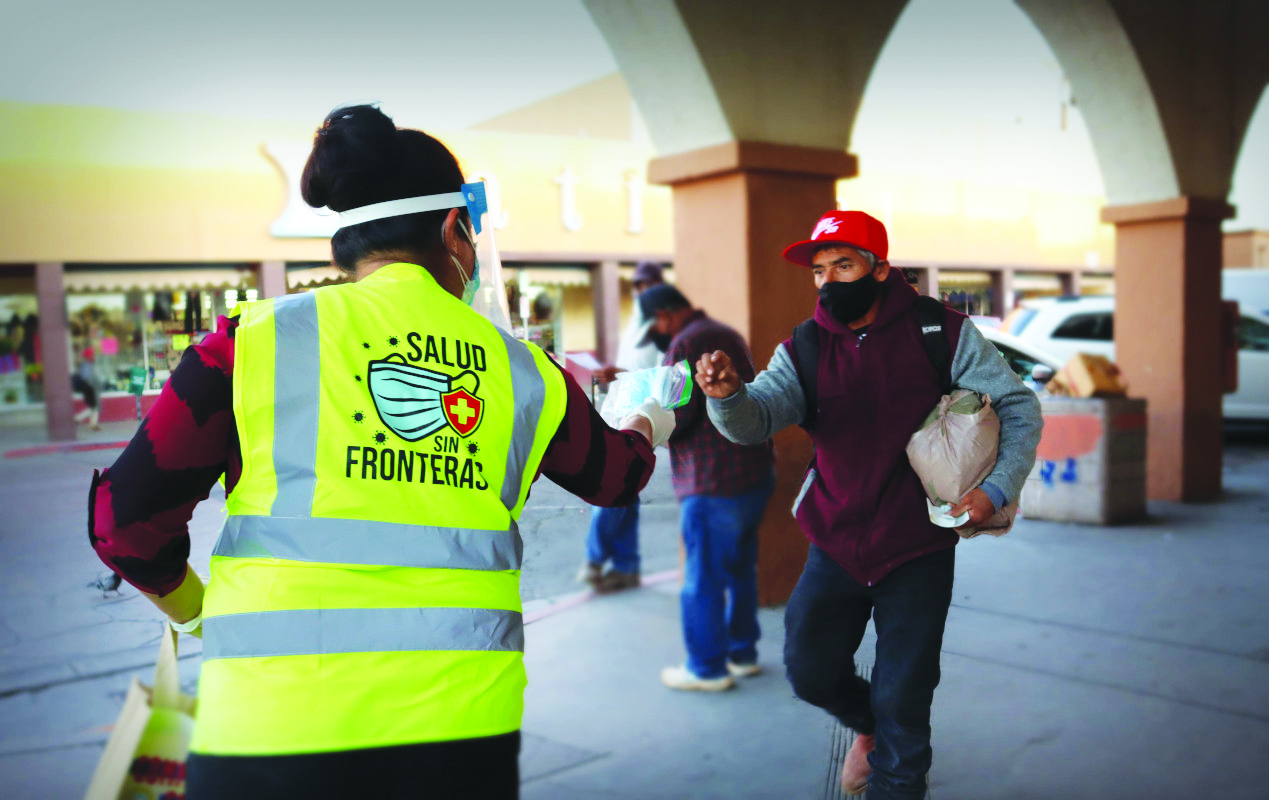 Imperial County, a rural region in Southern California along the Mexico border, has one of the best vaccination rates against Covid-19 in the nation, despite being one of the state’s poorest regions.

“Before the pandemic, we had endemics, persistent endemics. So a pandemic only means the entire world is experiencing a crisis such as we did with this virus. But we are experiencing that all the time. We’re experts,” said Luis Olmedo, Executive Director of Comite Civico del Valle.

He spoke at a July 13 news briefing cosponsored by Ethnic Media Services and the Vaccinate All 58 initiative of the California Department of Public Health.

“Congratulations to everyone in Imperial County on the outstanding job they’ve done getting people vaccinated. You should be very proud of this accomplishment. You’re not only the highest in the state, you’re actually one of the highest in the country,” said Dr. Timothy Brewer, Professor of Medicine and Epidemiology at the University of California, Los Angeles.

The US has seen 88 million Covid infections, resulting in more than one million deaths. California has experienced 9.6 million cases, and 92,000 deaths.

Imperial County has seen 60,000 Covid infections — in a mostly agricultural population of 197,000 people — and 1,000 deaths. Brewer heralded the rates as a success. “Though Imperial County’s case rates are about 37 percent higher than the state as a whole, your death rates are actually lower right now.”

“So even though you had more deaths before, because of that tremendous job you’ve done vaccinating everybody, your death rates are actually lower than the state as a whole. And that’s just a really terrific accomplishment,” he said, noting that Covid-19 vaccines are effective against preventing hospitalizations and deaths, but less so at preventing infection because the virus changes as it replicates.

Imperial County is currently experiencing a surge of new infections, with 49.5 percent of its population — nearly one out two — testing positive for Covid, noted Rosyo Ramirez, Community Health Division Deputy Director for the Imperial County Public Health Department. This is the third surge the county has experienced.

“But although we’ve seen these high peaks, because we have high vaccination rates, we did notice a complete change in impact in our hospitalization and death,” she said.

“Our death rates went down as we started increasing our rates of vaccination. And so right now, our deaths have definitely been very low compared to early on before we started vaccinating our community,” said Ramirez.

At the start of the pandemic in 2020, Imperial County had very high death rates, with hospitals at full capacity. “We are a very small community. Everyone knew someone who was facing these devastating impacts,” said Ramirez, noting that people were anxious to get vaccinated as soon as vaccines became available.

The county public health department worked with CBOs, Federally Qualified Health clinics, local pharmacies, farm labor groups and growers’ associations to develop strategies to get residents vaccinated as soon as possible. “We worked wherever we could set up shop to make the vaccine accessible within the community and not just in one location,” she said.

One of the most successful initiatives was the “Help US Help Them” campaign which encouraged people to help others without access to computers, or those who didn’t know how to navigate the Internet to get connected and find a vaccine clinic. In-language billboards, radio spots, and newspaper ads also helped to spread the word.

Olmedo noted the huge role community based organizations played in delivering the vaccine to Imperial County residents, largely without federal or state resources.

“We come from a history of 100 years of economic and racial discrimination where the majority of the people have been the workers and only a few people have held the power,” Olmedo said. “We were left alone to fend for ourselves and a lot of people fell through the cracks over the decades.”

“The federal government never stepped up to provide a single mask, a single sanitizer, a single anything. They did nothing,” said Olmedo.

Private organizations provided funding to help community organizations address the crisis on both sides of the border, he said, noting that they also provided supplies along with warehouses to store personal protective equipment.

Producers played a critical role, noted Olmedo.  “We started seeing immediately that there were outbreaks within our beef processing plants and other facilities. And so they opened their doors for us to partner with them.”

When vaccine roll-outs began in 2021, the state created a tiered process, prioritizing the most-vulnerable populations. “We created our own database that was better than myturn.ca.gov because we were actually able to make sure that we vetted people that were going in, that they actually represented that population that was next. Otherwise they couldn’t register to get that vaccine,” said Olmedo.

Luis Flores and his sister Daniela Flores, co-organizers of the Imperial Valley Equity & Justice Coalition, discussed the work of community-based organizations in delivering vaccines to where people worked and lived, and dispelling myths about the shot.

Daniela Flores and her brother, Luis, are co-organizers of the Imperial Valley Equity & Justice Coalition

Daniela Flores noted that while Imperial County had very high success rates with the primary dose of vaccine, it is severely lagging behind the rest of the state in boosters. Only 47 percent of residents have received a booster. “Farm workers face many barriers to vaccinations,” she said, noting lack of access to health care, transportation issues, and time off work. The biggest issue was language barriers.

Her organization set up a Spanish language hotline where people would be able to reserve slots for farm workers. “We would call back farm workers at a time that we knew they could pick up the phone when a clinic was announced and we made the appointment for them,” she said.

Funding for CBOs is now winding down as the priorities of the county shift to other matters. “We see less of these strategies used to fill gaps of the vulnerable communities that were used in the early months of vaccinations. So while we celebrate the early vaccination efforts, we consider the vulnerability to the new variants and the ones that will continue to show up.”

Imperial County’s success is a tribute to grassroots community organized in this predominantly Latino community.

“And our booster rank at 49 out of 58 should be cause for alarm,” said Daniela Flores. “So let’s remember the strategies that made us successful and in reaching people for their initial vaccines and sustain them through the booster campaign as well.”

Luis Flores noted that political preferences also played a role in the high rates of vaccination in Imperial County. “By the start of 2022, political ideology was the strongest predictor of vaccinations, rather than race or ethnicity,” he said.

Imperial County has a very low number of White conservatives but the highest proportion of Latinos of any county in the state – over 86 percent.  Latinos initially lagged far behind on vaccines, but by the fall of 2021, their vaccination rates had jumped.

Calexico – which is almost entirely Latino with the lowest income per capita in the county – had higher vaccination rates than either Brawley or Imperial, he added, another sign of the power of community cohesion in getting vaccinated.

Olmedo said more resources need to be directed to community based organizations in preparation for the next emergency in the county.

“We (CBOs) need to be there hand-in-hand with the emergency response system. We cannot go calling at the middle of a crisis, begging for PPE, begging for resources,” Olmedo said.