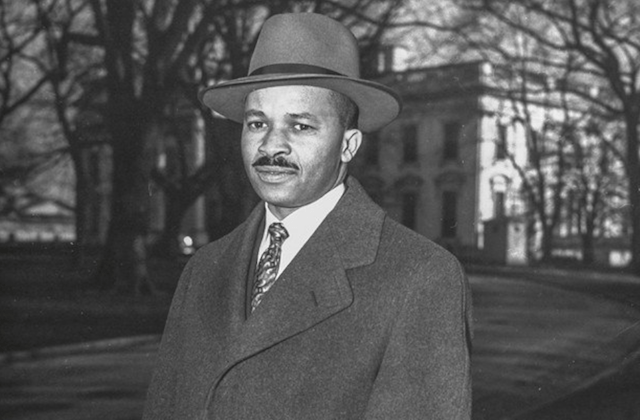 By Deborah Bailey, Special to the AFRO

Born in St. Louis, Mo., in July, 1906, McAlpin studied journalism at the University of Wisconsin and pursued journalism. McAlpin worked for the Washington Tribune, an African-American weekly publication, where he served as reporter, editor and office manager.

McAlpin also worked in public relations and advertising before joining the New Negro Alliance, a civil rights organization, in 1933 while pursuing a law degree at the. During this time McAlpin also furthered his education and enrolled at The Robert U. Terrell Law School, an historically Black institution conferring law degrees in Washington, D.C. from 1931 to 1950.

McAlpin passed the bar exam in 1937, but remained a Washington correspondent for the Chicago Defender.

As a writer for NNPa, Harry McAlpin, was featured in the AFRO, such as in this 1945 article. (AFRO File Photo)

As McAlpin waited with his peers to enter the Oval Office on Feb. 8, 1944, his White colleagues became disgruntled and tried the same strategies, then, that too many African Americans experience now in corporate and executive settings, they tried to barter with him.

McAlpin’s peers promised, they would share their notes, and make sure he got the same story if he just wouldn’t go in the room. They would even make him a member of the White House Correspondents Association if he just didn’t go into the Oval Office for the press conference.

McAlpin walked into the Oval Office for the press conference with President Franklin D Roosevelt, who shook McAlpin’s hand afterwards saying “Harry, I’m glad you are here,” according to Blackpast.org. The New York Times covered the news of McAlpin’s first White House briefing.

“Harry McAlpin, the only Negro yet to be accredited as a White House correspondent, attended his first press conference today. He represents the Atlanta Daily World and the press service of the Negro Newspaper Publishers Association,” according to the 1944 article.

McAlpin died on July 18, 1985, just before his 79th birthday. In April 2014, the White House Correspondents Association (WHCA), honored McAlpin posthumously and named a scholarship in his honor. Admitting their recognition was a little late in coming, George Condon, WHCA unofficial historian said of McAlpin, “Harry McAlpin is someone who should be recognized and shouldn’t be forgotten.”

McAlpin was also recognized by Former President Barack Obama for being a pioneer in journalism.

Help us Continue to tell OUR Story and join the AFRO family as a member – subscribers are now members!  Join here!