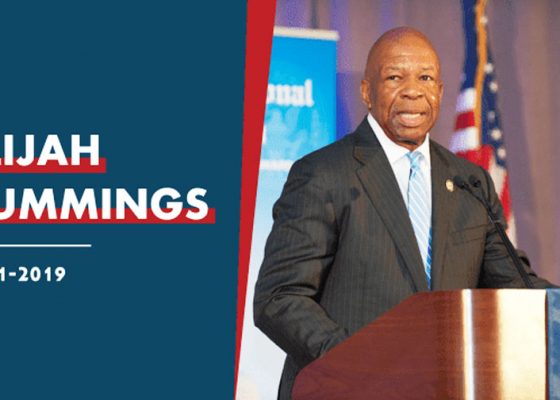 The nationally televised October 25 funeral services for the late Congressman Elijah E. Cummings, paused partisan debates and revealed how a son of Baltimore worked tirelessly for his constituents and for this nation. In the days since his home-going, I have marveled at how his life’s work somehow brought together officials who held firm to their stark political divides but united to honor a man who believed that everyone deserved a fair chance at all America had to offer.

Even in death he broke yet another barrier by becoming the first Black Member of Congress to lie in state at the Capitol Rotunda. This singular and posthumous honor was true testament to his 12 years as a Member of Congress, and the preceding 14 years he served in Maryland’s House of Delegates, where he became the first Black in the state’s history to be named Speaker Pro Tempore.

To all who worshiped or wept at his passing, perhaps now is the time to remember how he lived, valiantly fighting for the promises of America and the belief that as a country, we could and should rise to right the wrongs for this and future generations. From civil rights to housing, consumer protections, gun violence, and more, Elijah Cummings used his powerful voice and influence to forge progressive changes across life’s many dimensions, notably by his early and strong advocacy for consumer financial rights.

“For consumers, he was the voice who championed reforms to protect families from abusive payday lenders, predatory for-profit colleges, and housing discrimination,” noted Nikitra Bailey an EVP with the Center for Responsible Lending. “His legacy is a shining example of what public service ought to be—a fighter for truth, justice, and fairness.”

In 2011 during the nation’s foreclosure crisis, Congressman Cummings called for the House Oversight Committee to use its subpoena powers to secure answers from mortgage lenders on practices that affected civilians and servicemembers alike. At the time as Ranking Member of this key committee, Cummings told POLITICO, “The thing that disturbs me is that not all of Congress understands how serious this problem is.”

In the aftermath of the 2015 Freddie Gray homicide, Rep. Cummings walked the streets of Baltimore using a bull horn to call for peace. Speaking to the spate of violence surrounding Gray’s death, Congressman Cummings said, “The American people have had enough, and so have I.”

The following year, 2016, he teamed with Senator Elizabeth Warren to call for the Consumer Financial Protection Bureau to increase its oversight of nonbank mortgage lenders whose market share of mortgage originations was growing but were not federally regulated as banks, credit unions and other lenders were. Among the concerns cited in a joint letter to then CFPB Director Richard Cordray were consumer risks in a still-volatile mortgage market, as well as the role of mortgage servicers.

In ensuing years and despite deteriorating health, Congressman Cummings remained diligent in his pursuit of justice in other policy areas as well.

This March he joined Oregon Congresswoman Suzanne Bonamici to co-sponsor the SAFE Lending Act (Stopping Abuse and Fraud in Electronic Lending), a measure designed to address many of the worst abuses of predatory online payday lenders.

“In recent years, the Consumer Financial Protection Bureau has turned its back on consumers being targeted by payday predators,” said Cummings this spring. “Our constituents, and consumers everywhere, deserve protection from payday lenders and rogue internet-based lenders who prey on hardworking Americans struggling to make ends meet.”

“He worked until his last breath because he believed our democracy was the highest and best expression of our collective humanity and that our nation’s diversity was our promise, not our problem,” noted his widow, Dr. Maya Rockeymoore Cummings.

The challenges that confront all of America, but particularly people of color, must now be taken up by others – those who worked with him, and others whom the Congressman inspired. In one of his last comments in the House Oversight Committee, he left us a prophetic challenge.

“When we’re dancing with the angels, the question we’ll be asked: In 2019, what did we do to make sure we kept our democracy intact? Did we stand on the sidelines and say nothing?”

His beloved and departed soul is now resting. Here’s hoping people of purpose and goodwill will complete the journey towards justice for all.