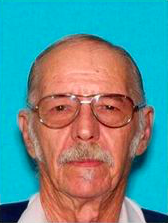 Robert Dailey’s family contacted the San Bernardino American news asking for assistance in finding their family member, Robert Dailey. He was last seen October 18th in San Jacinto. Mr. Dailey drives a silver 2019 Toyota Corolla and his license plate is 8FNB671. Mr. Dailey suffers from dementia and has severe ankle wounds. He is believed to be in the Hemet, Perris or Menifee areas.

If you have any information on his whereabouts, please contact Menifee Dispatch at 951-677-4964.