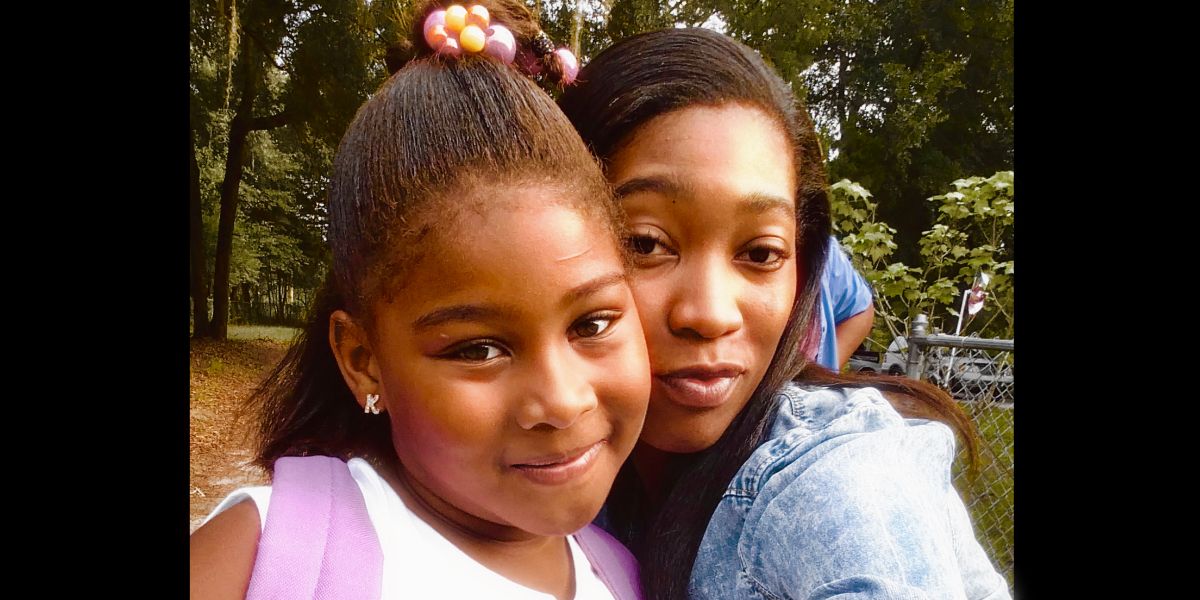 After losing her only child, 9-year old Kimmie, Mikasha Young-Holmes has a powerful message for parents.

Written by Mikasha Young-Holmes as told to Chandra Thomas Whitfield

This story was originally published on BET.com

I have a message to all of the parents across the country, wrestling with the all-important decision of whether to allow their children to return to in-person schooling this fall amidst the ongoing coronavirus pandemic: Don’t do it.

Consider yourself blessed if you still have the opportunity to keep your children, in my opinion our most precious gifts on this earth, at home and off the frontlines of this merciless virus known as COVID-19. My family and I are not so fortunate. By the time we realized that my jovial and playful 9-year-old daughter would become one of this public health crisis’ youngest casualties to date, it was far too late for us to do anything more to protect our sweet girl. Florida, where I live, now has the second-highest number of coronavirus cases in the country; even more than New York, which was a hot spot early on in the pandemic.

Kimora Lynum, or “Kimmie” as we affectionately called her, was literally the light of our lives; she gave us joy, she made us laugh and she made life fun, exciting and, worth living. Her vibrant light was dimmed forever on July 17, 2020. We have not been the same since.

For as long as I live, I’ll probably replay in my mind every millisecond and every agonizing little detail about that day; everything that transpired leading up to the heartbreaking moment when I found her unresponsive at our home in Hawthorne Florida, near Gainesville.

It was a bittersweet day that began with all of the happiness and fun that made being mom to my little diva Kimmie so pleasurable. Little did I know that the elation I felt that day would ultimately be overtaken by excruciating pain and unimaginable grief over the unexpected loss of my little girl leaving us in the physical far too soon.

Kimmie had been under the weather for nearly a week, but this day, what would be our last day together, she finally seemed to be doing better – much better, in fact. I was relieved that she seemed to be acting like herself again. It was a different story days earlier when she’d begun complaining of intense stomach pains. When the liquid Tylenol we’d been giving her didn’t seem to be working, my mother Mashell Young-Atkins, decided to take her to the emergency room at a nearby hospital, UF Health – Gainesville. I met them there.

Her vitals were checked – she had a temperature of 103.3 – and a urine sample was taken. She underwent a battery of tests and was examined by a doctor, but never once was it suggested that she be tested for COVID-19. Ultimately, we were told she had a urinary tract infection. She was given shots and more Tylenol and we were sent home with a prescription for antibiotics and advised to keep a close eye on her.

Over the next six days, Kimmie’s condition was up and down and the effects were obvious. My normally bubbly, free-spirited and outgoing kiddo, the same little girl who would effortlessly strike up conversations with total strangers regardless of race, age or background, everywhere we went, was now subdued. An A/B student who loved to make friends, shop, play video games and sing and dance around the house to YouTube and TikTok videos, she was now lethargic and sleepy. I even noticed that she was walking much slower than usual too; only able to muster up the energy to climb onto the couch and stare silently at the television. This wasn’t our typical Kimmie, but we continued to follow doctor’s orders and administered her antibiotics as instructed.

By Friday, almost a week later, she’d finally seemed to be turning the corner. She played outside for a while and we decided to ride into town for dinner. She ate well, a sign that her appetite was finally back. Honestly, I felt like my little sweetie was getting back to herself.

When we returned home my aunt and grandmother stopped by to drop off a get well gift and naturally, Kimmie was elated and giddy as ever about her new tie dye kit. Afterwards, she and I laughed and giggled through several lively rounds of one of her favorite Nintendo video games, Yoshi’s Crafted World. We had an absolute blast. I thought nothing of it when she told me she was tired and wanted to take a nap. I hugged and kissed her before she walked off and told her to go ahead get the rest she needed. That would be the last time I saw my precious Kimmie alive.

I’d assumed she’d gone to her own bedroom to sleep, but over an hour later, when I went to my room to retrieve my cell phone charger, I noticed that she was in my bed, lying in a strange position. She appeared to be sleeping, but her eyes were slightly open. I found that odd, so I nudged her lightly; she didn’t awaken. I shook her a little harder and soon realized she was completely unresponsive. Panic set in and I just knew something was very wrong.

I guess I screamed out because the next thing I knew, my mother was on the floor administering CPR on her, while my stepdad, Javon [Atkins], dialed 911 and remained on the line with the operator. I ran outside to direct the ambulance and to call my Aunt Veronica [Young] to let her know what was happening.

Once the ambulance arrived, we all piled into my white Nissan Sentra and trailed it to the hospital. I’ll never forget the sight of all of those tubes; an IV, a breathing tube and all kinds of medical gear covering my baby’s limp body. At the hospital, a team of about 10 to 15 medical professionals worked on her for nearly an hour, but as a mom, deep down I knew she was already gone.

Once they officially broke the bad news to us it was like having an out of body experience; my heart sank and it literally felt like it leapt out of my chest. I don’t expect this heartache to ever go away.

Now my mind is forever flooded with questions and thoughts; trying to make sense of something that simply does not make sense. How could this have happened? We’d just had dinner, played video games and laughed together and now she’s dead. How could my beautiful, brown baby girl be gone, just like that?

A test administered after her death confirmed that Kimmie was infected with COVID-19. She had no underlying conditions that we were aware of and she had not been to school or camp, just at home with me every day, since the shelter-in-place orderswere handed down in March. We’ll probably never know how or where she contracted this killer virus.

Her death hits extra hard because it’s on the heels of another family tragedy; Kimmie’s father, with whom she was very, very close, had been gunned down in April, just a few months ago. We’d all been struggling with that loss and now this. I try to take comfort in believing that somehow they are both together again.

After our hellish ordeal, I can’t help but feel furious, sad, frustrated and flat-out terrified when I hear Florida Governor Ron DeSantis and other national leaders out here having the gall and audacity to suggest to parents that in-person schooling should resume as usual for American kids this fall. I know there are some students out there who may not do as well with online schooling, but it’s an option that all parents and students should have and take seriously because it’s a terrible idea to put kids out there while the world is in the condition that it’s in. To suggest anything else, in my view, is reckless, insensitive and ignorant, especially knowing that more than 4.8 million cases of COVID-19 have been reported in the U.S. to date; along with more than 176,000 deaths in the U.S., including that of our precious Kimmie’s, according to a Johns Hopkins University database. And some models predict that the death toll will reach nearly 300,000 by December.

Kimmie’s memorial service was beautiful and absolutely perfect thanks to the generous support of so many who donated to our GoFundMe account. The days since, however, have been agonizing and disturbingly quiet. We miss her laughter, her scent and that million dollar smile that lit up our lives and every room that she entered. Now, all I have is that heartbreaking memory of my little girl lying in a casket, decked out from head toe in her favorite, colorful unicorn gear; a sparkly gold crown resting atop her head (a nod to the princess that she was to us and so many others).

No parent should have to live in fear every time they send their children out the door or worse — relive the nightmare that my family and I have already endured. Parents, homeschool your kids and do your best to keep them out of harm’s way until there is a vaccine and this pandemic is better controlled than it is now. Simply put: it’s just not worth it.

I also beg you to take the time to call or write — by letter, email or social media — to Governor DeSantis and other leaders to let them know that you don’t appreciate their blatant disregard of the dangers that this global health crisis continues to impose on the most vulnerable of people. Tell them Kimmie’s story and let them know that nobody, especially our children, should be treated as disposable pawns in a political game. In other words, make it clear that you agree with me that our childrens’ lives matter.

Chandra Thomas Whitfield is an award-winning multimedia journalist whose work has appeared in The New York Times, The Washington Post, The Boston Globe, NBC News and The Huffington Post. She is a 2019-2020 fellow with the Leonard C. Goodman Institute for Investigative Reporting and host and producer of In The Gap, a recently launched podcast for In These Times Magazine about how discrimination in pay adversely impacts the lives — and livelihoods — of Black women in the American workforce.