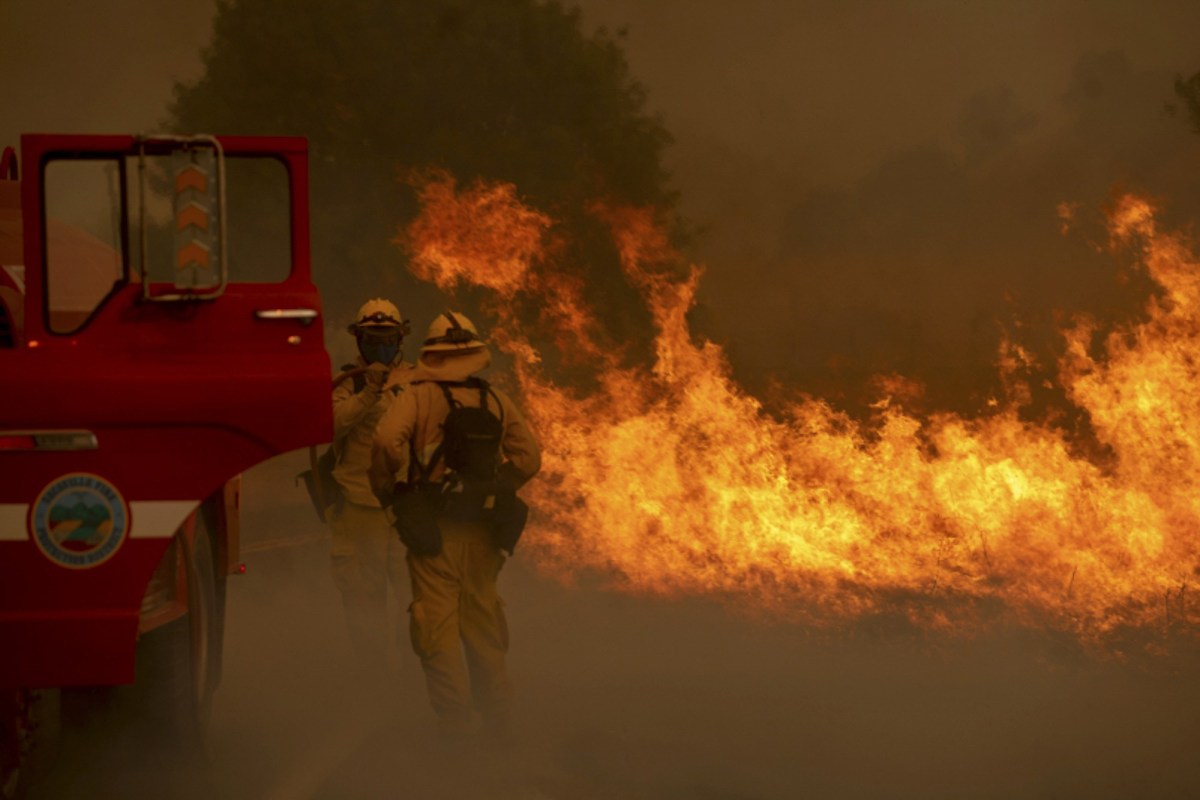 Despite some political bickering, Gov. Gavin Newsom vowed there will be “no politics in this space” as he thanked the Trump administration for emergency assistance.

With 560 fires raging across California, Gov. Gavin Newsom worked today to put out some fires of his own, thanking the Trump Administration for emergency assistance and vowing that there will be “no politics in this space.”

Newsom — a Democrat who campaigned as a fierce critic of Republican President Donald Trump, but has taken a more conciliatory tone during the coronavirus pandemic — spoke at a Cal Fire briefing in Napa County, a day after both men lobbed seemingly partisan attacks amid the crisis.

Trump on Thurday threatened to withhold federal aid from California, saying the state was suffering fires because it hadn’t followed the president’s advice to thin trees and clean debris from forest floors. Newsom clapped back that night during a brief video appearance at the Democratic National Convention.

“The reason I pushed back was I thought it was important, because I don’t want to have people strewn with some anxiety that somehow the President may pull funding,” Newsom said today.

“He may make statements publicly, but the working relationship privately has been a very effective one.”

Many of the fires now burning across the state were sparked by the recent lightning storm across Northern California, Newsom said. The LNU Complex fire in the wine country area and the CZU Complex fire in the Santa Cruz mountains have quickly become two of the 20 largest fires in California history, he said, already burning an area as large as Rhode Island and killing four people. More than 12,000 firefighters are working to suppress them, Newsom said, but the twin blazes “are stretching our resources, stressing our personnel.”

Newsom said today he has developed a strong personal relationship with Trump and characterized the president’s animosity toward California as more show than substance.

“There’s not one phone call that I have made to the President, where he hasn’t quickly responded,” Newsom said. “And in almost every instance, he’s responded favorably in terms of addressing the emergency needs of the state,” related to both the pandemic and wildfires.

“He may make statements publicly, but the working relationship privately has been a very effective one.”

In particular, Newsom highlighted a new agreement between California and the federal government to increase vegetation management on U.S. Forest Service land in the state, calling it “an unprecedented amount of resources to address the concern that (Trump) highlighted.”

Their agreement calls on the state and federal governments to work together to reduce the risk of catastrophic wildfire by thinning a million acres a year,  developing a shared 20-year plan for forest health, expanding the use of prescribed burns, and improving timber harvesting, according to information Newsom’s office released last week.

“Since the federal government owns nearly 58 percent of California’s 33 million acres of forestlands, while the state owns 3 percent, joint state-federal management is crucial to California’s overall forest health and wildfire resilience,” the governor’s office wrote in a press release.

It cites “unnaturally dense forests, a century of fire suppression and climate change resulting in warmer, hotter and drier conditions” as reasons California has become so flammable.

As firefighters struggled to contain the blazes, several other states have sent fire engines or planes to help. Engines from Arizona, Oregon, New Mexico, Nevada and Idaho have already arrived, according to a spokesman for the Governor’s Office of Emergency Services, while engines from Washington, Utah, Texas and Montana are on the way.

“Those states are also dealing with their own domestic challenges within their states related to the heat wave, and yet they’re still offering support,” Newsom said, thanking fellow governors.