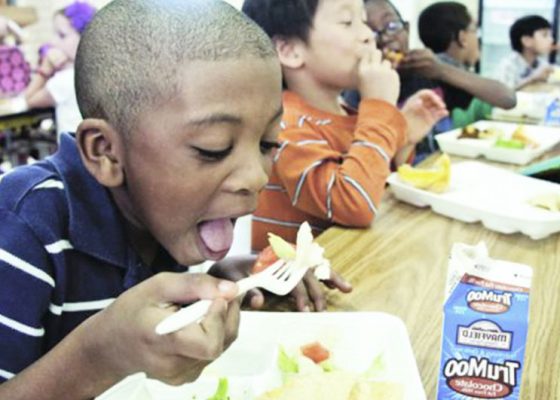 Thousands of children in California would no longer qualify for free school lunches if a federal proposal to cut the number of food stamp recipi­ents is finalized.

The U.S. Department of Agriculture is asking for pub­lic comment on a proposal to restrict the number of families eligible for food stamps to only those with gross incomes of 130 percent of the federal pov­erty level (about $33,000 for a family of four) or less. Cur­rently many states, including California, allow families with higher incomes (up to about $50,000 for a family of four) to enroll in the food stamp pro­gram if their childcare, hous­ing and other eligible expenses bring their income down to about $25,000 or less.

Confusion is likely to ensue.

Jared Call, managing policy advocate for California Food Policy Advocates, said schools are supposed to notify families when students no longer quali­fy automatically, but often the notices are not sent, or families misunderstand them or do not apply.

“If they’re cut off and keep getting those meals, they may end up with a bill that their par­ents don’t understand why or where it’s coming from,” Call said.

It’s not clear yet how many children in California would be affected. The USDA estimates that 3.1 million people nation­wide would lose food stamps under the policy change. Ac­cording to U.S. Rep. Bobby Scott(D-Va.), the USDA also estimates about 500,000 chil­dren would lose automatic eli­gibility for free school lunches, though the department did not include this estimate in the pro­posal.

About 2 million children in California are in families that receive food stamps. There are no estimates yet of how many of those might lose eligibility if the new rule is approved.

The administration says the change is necessary to prevent fraudulent applications for food assistance.

“Too often, states have mis­used this flexibility without re­straint,” said U.S. Secretary of Agriculture Sonny Perdue in a press release announcing the proposal. “The American peo­ple expect their government to be fair, efficient and to have in­tegrity — just as they do in their own homes, businesses and communities. That is why we are changing the rules, prevent­ing abuse of a critical safety net system, so those who need food assistance the most are the only ones who receive it.”

Education experts and advo­cates for low-income families are concerned about how the change could affect children.

“The California Department of Education is very concerned about the Trump administra­tion’s proposal,” wrote Scott Roark, a spokesman for the department, adding that the de­partment is still analyzing the impact.

The proposal would also affect students at schools that serve free breakfast and lunch to all students, regardless of their household income. Those are schools in which 40 percent or more of students qualify for free lunch either because they are enrolled in a program like food stamps or because they are homeless, foster or migrant children. There are more than 3,000 schools in California that offer free meals to all students.

Call, of California Food Policy Advocates, also is con­cerned about what he called a “cascading effect” that could affect school funding if a large number of children lose their free lunch eligibility. Under the Local Control Funding Formula, schools receive extra funding for each student who qualifies for free or reduced-price school meals, as well as English learners, homeless stu­dents and foster children.

The Trump administration proposal is the latest in a series of attempts to reduce federal benefits for low-income peo­ple.

For the complete article, go to https://bit.ly/2yHFlbI