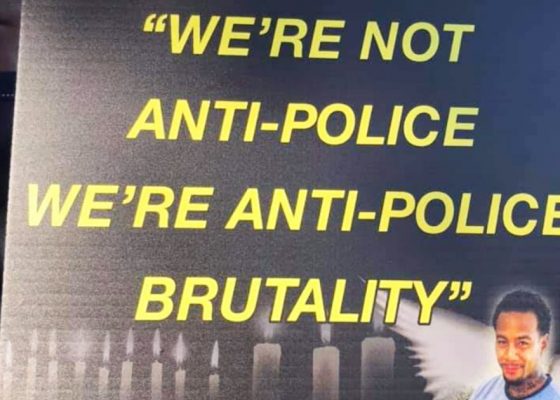 Dennis Rodman with Pastor Hines at the event..

Dennis Rodman and his girlfriend Misty, who had a run-in with Victorville police in the past

Pastor Israel Riley with a side view of Paul Marsh

Victorville, CA-Wednesday  evening  at  5 pm, just three days short of the thirty day marker of the end of his life, the Community Action Committee, Southern Christian Leadership Conference, pastors, family, and community activists gathered at Adelanto City Hall park to share their concerns and strategize for ways of ending the flow of bullets into the bodies of unarmed citizens of color by law enforcement.

The first speaker was his Pastor, Reverend Israel Riley, Christ the Solid Rock church in Apple Valley, Reverend Riley also served as master of ceremonies, and he delivered the eulogy for Allen at Second Baptist church in Santa Ana on July 26th.

Clifton Harris, is a retired Sheriff Deputy who worked with San Bernardino and Riverside County Sheriff departments.  He was one of the first African American Americans to serve in that capacity, Harris stated that laws already in place for actions involving interactions between law enforcement and individuals were not used, there is no record of tasering, as a matter of fact; witnesses state that when Allen was commanded to come out of the laundry room where he had gone after the deputies had been called during an altercation with his partner.  He came out with hands in air, walking backwards.  However according to his sister Jessica Powell, she watched the deputies collect at least twenty one (21) shell casings after the execution.  It was during this phase that when children ran towards the deputies they were threatened to be shot, this included Powell’s fifteen year old son, who was very close to his uncle.

Former NBA star, Dennis Rodman, came to the gathering and spoke, his girlfriend had been struck by deputies from the Victorville station in the past.

Another surprise speaker to most was the Mayor of Adelanto, Gabriel Reyes, who is married to Allen’s cousin, he stated that when something like this happens your whole world changes, he acknowledged that he had known Allen for a long time.   Mayor Pro-Tem, Stevevonna Evans also addressed the gathering, she stated that this behavior is out of control, and changes must be made, laws adhered to and accountability for their actions.

The peaceful gathering brought approximately 300 individuals to the park on an early Wednesday evening, not because they had nothing better to do, but because for communities of color this type of shootings of unarmed men and women happens with amazing frequency, people are tired, afraid, and angry, however there was no display of anger, oral or physical expressed, but rather a call for justice.  If mass murderers can be taken alive, why can’t these same principles be applies to all citizens of the United States wherever they reside.

According to attorneys working on the case, they were told to “tone it down”; and some members of the committee had their devices infiltrated.

A very prominent sign read: We are not anti-police, but we are anti-police brutality!

Darrel’s grandfather was one of the speakers, and he stated that one of the older sons, though troubled, wants to be a policeman when he grows up to treat people right, and not kill them unnecessarily.

Southern Christian Leadership Conference president, Paul Marsh, spoke about the need for change, the culture of cover-up, and lack of accountability when citizen violence is questionable.  The organization grew out of the sixties civil rights movement with Dr. Martin Luther King Jr. and Reverend Ralph Abernathy.  The high desert branch was originally started in 1997 under the tutelage of National President, Martin Luther King III.  He opened branches in Victorville, San Bernardino, and Riverside, all these areas were wrought with questions that needed answers.  Marsh was involved with the organization then, and re-established it later to continue the work of representing and investigating cases of brutality by those in uniform.

The group plans to keep moving forward to change the culture of abusive behavior that seemingly exists in communities of color.  Hands up!  Does not guarantee a long life!

Darrell’s sister stated she wants justice for her brother!  His mother did not speak at the event. As the sun set in the western hemisphere, the attendees slowly began to disperse.  A very peaceful occasion was had taken place and organizers stated they were pleased and ready to keep the momentum going.