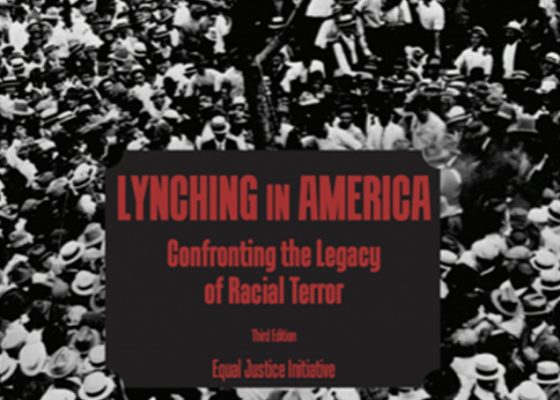 Lynching in America: Confronting the Legacy of Racial Terror documents EJI’s multi-year investigation into lynching in twelve Southern states during the period between Reconstruction and World War II. EJI researchers documented 4075 racial terror lynching’s of African Americans in Alabama, Arkansas, Florida, Georgia, Kentucky, Louisiana, Mississippi, North Carolina, South Carolina, Tennessee, Texas, and Virginia between 1877 and 1950 – at least 800 more lynching’s of black people in these states than previously reported in the most comprehensive work done on lynching to date.

In 2017, EJI supplemented this research by documenting racial terror lynching’s in other states, and found these acts of violence were most common in eight states: Illinois, Indiana, Kansas, Maryland, Missouri, Ohio, Oklahoma, and West Virginia.

Lynching in America makes the case that lynching of African Americans was terrorism, a widely supported phenomenon used to enforce racial subordination and segregation. Lynching’s were violent and public events that traumatized black people throughout the country and were largely tolerated by state and federal officials. This was not “frontier justice” carried out by a few marginalized vigilantes or extremists. Instead, many African Americans who were never accused of any crime were tortured and murdered in front of picnicking spectators (including elected officials and prominent citizens) for bumping into a white person, or wearing their military uniforms after World War I, or not using the appropriate title when addressing a white person. People who participated in lynching’s were celebrated and acted with impunity.

The report explores the ways in which lynching profoundly impacted race relations in this country and shaped the contemporary geographic, political, social, and economic conditions of African Americans. Most importantly, lynching reinforced a narrative of racial difference and a legacy of racial inequality that is readily apparent in our criminal justice system today. Mass incarceration, racially biased capital punishment, excessive sentencing, disproportionate sentencing of racial minorities, and police abuse of people of color reveal problems in American society that were shaped by the terror era.

No prominent public memorial or monument commemorates the thousands of African Americans who were lynched in America. Lynching in America argues that is a powerful statement about our failure to value the black lives lost in this brutal campaign of racial violence. Research on mass violence, trauma, and transitional justice underscores the urgent need to engage in public conversations about racial history that begin a process of truth and reconciliation in this country.

“We cannot heal the deep wounds inflicted during the era of racial terrorism until we tell the truth about it,” said EJI Director Bryan Stevenson. “The geographic, political, economic, and social consequences of decades of terror lynching’s can still be seen in many communities today and the damage created by lynching needs to be confronted and discussed. Only then can we meaningfully address the contemporary problems that are lynching’s legacy.