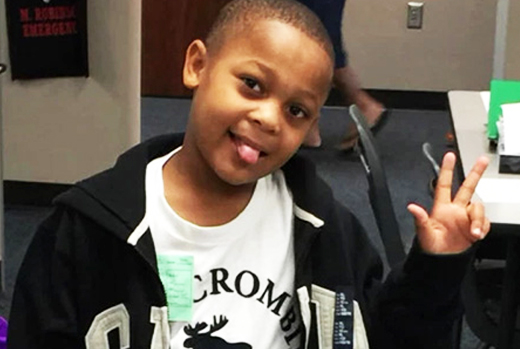 Houston, TX — Kevin Reese Jr., a 10-year old boy from Houston, Texas,  shockingly ended his life after he was apparently bullied several times at school. According to reports, other students violently beat him and wrote on his tablet to “kill yourself.”“I never thought he would go this far, never. I’m still in disbelief. It’s taking me a while to actually accept the fact that this happened,” Crystal Smith, Kevin’s mother, told KTRK.

Kevin, a fifth-grade student at Robinson Elementary School, hanged himself in his closet on January 21 after coming home from school. His 13-year old sister was the one who found him lifeless and called their mother, who was out of town for work at that time.

“She was just screaming on the phone and I didn’t understand and she screamed ‘Kevin’,” Crystal remembered. “He hung himself in his closet. I told her to hang up with me and cut him down, and while you’re cutting him down call 911.”

Crystal described her son as a goofy child who enjoyed making others laugh and also loved drawing and painting. She said, “He’s my little goof troop, I called him.”

According to her, some boys at school were apparently taking advantage of Kevin’s small build and punched him several times. She said some even wrote “Kill yourself, you don’t belong here” on his tablet.

“When it got physical back in November, he came home crying because he didn’t fight back and one of the boys punched him several times coming from recess,” Crystal said.

Crystal said she reached out to school officials in connection to the bullying her son was suffering. An official, who no longer works at the school, reportedly told her through a voicemail that the school investigated on the bullying incident. However, the other student involved in the beating denied the allegations and did not receive any punishment. The school even told her that “they never found any bullying going on.”

Despite the devastation, Crystal tries to be strong and she hopes other parents wouldn’t experience the same situation. She said, “Pay attention to your child. Don’t assume that things are handled at the school, stay on top of it until you see something come out on the end.”