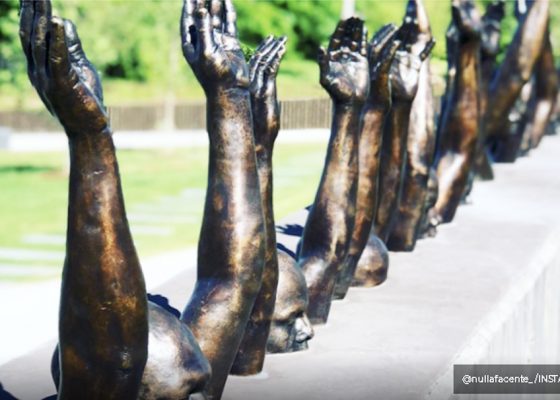 “We’re dealing with police violence. We deal with these huge disparities in our criminal justice system. You know, if everything was wonderful you could ask the question, ‘Why would you talk about the difficult past?’ But everything is not wonderful.”

Hundreds of people lined up in the rain to experience a long overdue piece of American history and honor the lives lost to lynching at the National Memorial for Peace and Justice and the Legacy Museum in Montgomery Alabama on Thursday.

The Equal Justice Initiative, sponsor of this project, has documented more than 4,000 “racial terror” lynchings in the United States between 1877 and 1950.

Among memorial visitors were civil right activist Rev. Jesse Jackson and film director Ava Duvernay. According to the Chicago Tribune, Jackson said it would help dispel the American silence on lynchings, highlighting that whites wouldn’t talk about it because of shame and Blacks wouldn’t talk about it because of fear. The “60 Minutes Overtime” on the memorial just three weeks earlier was reported by Oprah Winfrey, who stated during her viewing of the slavery sculpture, “This is searingly powerful.” Duvernay, quoted by the Chicago Tribune, said: “This place has scratched a scab.”

The Montgomery Downtown business association’s President, Clay McInnis, who is white, offered his thoughts to NPR in reference to his own family connection to the history that included a grandfather who supported segregation and a friend who dismantled it. “How do you reconcile that on the third generation?” he asked. “You have conversations about it.”

A place to start: The Montgomery Advertiser, the local newspaper, apologized for its racist history of coverage between the 1870s and 1950s by publishing the names of over 300 lynching victims on Thursday, the same day as the memorial opening. “Our Shame: the sins of our past laid bare for all to see. We were wrong,” the paper wrote.

The innumerable killings of unarmed Black men and the robbing of Black families of fathers, mothers, and children today not only strongly resemble the history of lynchings, but also bring up the discomfort and visceral reactions that many have not reckoned with.

Bryan Stevenson, founder of the Equal Justice Initiative and the man who spearheaded this project, told NPR: “There’s a lot of conflict. There’s a lot of tension. We’re dealing with police violence. We deal with these huge disparities in our criminal justice system. You know, if everything was wonderful you could ask the question, ‘Why would you talk about the difficult past?’ But everything is not wonderful.”

WFSA, a local news station, interviewed a white man who had gone to see the Legacy Museum downtown, also part of the EJI project, located at the place of a former slave warehouse. He talked about how he was overwhelmed by the experience and that “Slavery is alive in a new way today.”

Reactions on social media were reflective of the memorial’s power and the work that is continuing toward progress.During a launch event, the Peace and Justice Summit, Marian Wright Edelman, activist and founder of the Children’s Defense Fund, urged the audience to continue their activism beyond the day’s events on issues like ending child poverty and gun violence, according to the Chicago Tribune: “Don’t come here and celebrate the museum … when we’re letting things happen on an even greater scale.”

Perhaps the reason to honor and witness the horrific experiences of our ancestors is to seal in our minds the unacceptable killings of Blacks today, and the work we ALL have to do now to stop repeating the past.