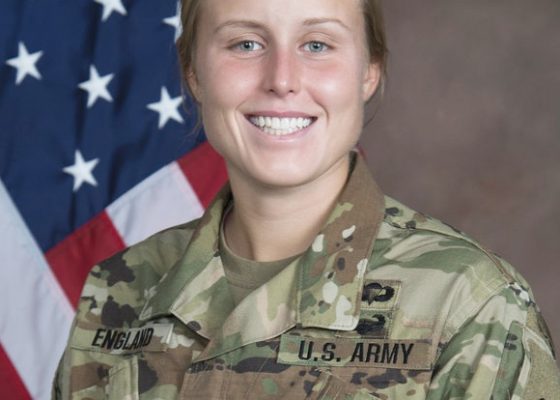 Cadet Taylor England fires her M4 carbine at a target during the Sandhurst Military Skills Competition at West Point, New York, April 14, 2018. England was the top-ranked infantry-bound cadet in the class of 2018. (U.S. Army photo)

When the Army opened a second round of divisions to women in newly integrated direct combat specialties this year, an overseas option in Vicenza, Italy, opened as well, the Army’s personnel boss told Army Times on Thursday.

“We have about 700 females who’ve gone into infantry armor and artillery,” he said, starting with 1st Cavalry Division and the 82nd Airborne Division in 2017, expanding to the 101st Airborne Division, 4th Infantry Division and 1st Armored Division this year.At least one female officer is committed to the 173rd, according to an April 19 Army release. Cadet Taylor England, a regimental sergeant major at the U.S. Military Academy, has committed to the unit following her May graduation.

“Our intent with Leaders First is, she’ll get there, she’ll be on the ground, and probably be on the ground there for a couple months,” Seamands said of the integration pilot program, which assigns officers to newly opened units first, then follows them with female noncommissioned officers and then junior enlisted.

England is the top-ranked of 230 cadets heading to the infantry branch in the class of 2018, according to the release.

After graduation, she will head to Fort Benning, Georgia, for a series of schools, including the Infantry Officer Basic Leader Course and airborne school.

She will likely report to Vicenza next spring, Seamands said, with female NCOs and junior soldiers to follow.

The Leaders First program is in the second of its three-year pilot, with plans to further open posts up to women next year, Seamands said.

Currently, the 1st, 2nd and 3rd Infantry Divisions are still closed to women in infantry, armor and artillery.

“Sooner rather than later, “ Seamands said of when he expects that the Army will be fully integrated.