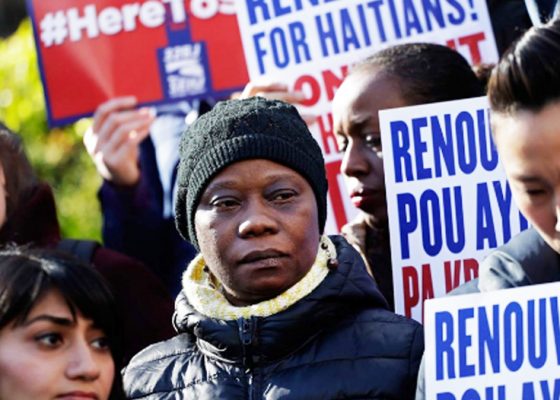 Haitians who came to the United States after a 2010 earthquake ravaged the country had their Temporary Protected Status revoked by the Trump Administration. The have until September 2019 to gain legal status, leave voluntarily or be arrested and deported. Courtesy photo

More than 200,000 residents of Salvador who came to the U.S. in 2001 after an earthquake destroyed much of their country had been granted TPS by former Presidents George Bush and Barack Obama. Courtesy Photo

More than 250,000 immigrants at jeopardy after losing Temporary Protected Status

WASHINGTON – Rony Ponthieux’s view of the future changes by the day.

A Haitian immigrant living in Miami, Ponthieux has been working in the United States under the Temporary Protected Status,TPS, provision since 2010, when he, his wife and two children, then 3 and 10, left Haiti in the wake of the island’s devastating earthquake. Receiving it, he said, was “a miracle for my family.”

Ponthieux now works as a nurse and hopes to eventually become a nurse practitioner. But the  future changed last year for him and more than 250,000 Haitians and Salvadorans when President Trump decided to end the TPS that had been in place under former president’s George Bush and Barack Obama.  Now, he and the others have until next year to get permanent status or leave.

“Before [the revocation of his TPS], I was able to work, to go to school, to take care of my family,” Ponthieux said, “”and I was okay with that.”

It is unclear, he said,  what he will do if Congress doesn’t create a way for him and his family to stay in the United States, but he’s not giving up.

“We’re still fighting,” he said, “I’m fighting. I feel that something will happen.”

As Congress and America continue to debate the plight of 700,000  children brought to the country as infants by their parents, so-called “Dreamers,” lost in conversation is the fate of about 50,000 Haitians and 200,00 Salvadorans were allowed to enter the U.S. temporarily after their countries were devastated by earthquakes in 2010 and 2001.  They will have until September 2019 to gain legal immigrant status or be arrested and deported.

Currently, a handful of representatives have proposed bipartisan legislation that would grant permanent legal residency to TPS migrants from Haiti, El Salvador, Nicaragua and Honduras.

Their bill would grant qualified migrants the option of adjusting their legal status from temporary to legal permanent resident if they received TPS status prior to January 2011.

The bill is backed by Republican representatives Carlos Curbelo and Ileana Ros-Lehtinen and Democratic representatives Frederica Wilson and Alcee Hastings.   All represent districts in central and south Florida with large Haitian and Salvadoran populations.

Wilson wrote a series of tweets pointing out what she said are the consequences of ending TPS for some.

“The reality is that in six months, Haiti will still be in no position to absorb and aid 58,000 unemployed people,” Wilson wrote. “It will still be recovering from the 2010 earthquake and the subsequent cholera epidemic imported by U.N. peacekeepers that has killed 10,000.”

“Rather than destroy the lives of families who have found refuge here from natural disasters and economic despair, the Trump Administration should act to ensure that individuals on TPS can continue to work and support themselves and their families and contribute both to the United States and to the reconstruction of their home countries,” Cummings said in a statement after the initial White House announcement.

Marlene Bastien, executive director of the immigrant advocacy group Haitian Women of Miami, said her office has been receiving calls from families who are unsure of their next steps.  Bastien said the revocation has left her “shocked and concerned.”

“We realized that the termination wasn’t based on the rules and the facts on the ground, but probably on race,” she said. “Immigration, after all, is a racial issue.”

After the White House’s initial decision to terminate TPS provisions in last November and Trump’s “sh*thole countries” comment in January in reference to Haiti and African nations, organizers in Miami and the District of Columbia—two cities with large Haitian and El Salvadoran populations—have held a number of protests.

They have also made several trips to Washington, hoping to galvanize lawmakers who, according to Bastien, “lack courage” when it comes to acting on immigration legislation.

Two of those could be Florida Sens. Marco Rubio and Bill Nelson. Bastien is urging Rubio and Nelson to protect the thousands of TPS recipients in Florida and to remind the rest of the country of the importance of Haitians and Salvadorans in the immigration debate.

Rubio, chair of the Senate Foreign Relations Subcommittee on the Western Hemisphere, wrote an opinion article in the Miami Herald, the city’s daily newspaper,  lauding Haitian’s contributions to Florida’s economy.

Revocation of the TPS, he said, “will have an immediate and serious impact on individuals, families, and communities in Florida, and a consequential and enduring impact on our friends in Haiti.”

Still, neither Rubio nor Nelson has introduced legislation or signed onto bills to protect those immigrant groups.

Antonio Woodbridge said he and his wife came to the United States to escape natural disaster and political turmoil in El Salvador following its earthquake in 2001. Woodbridge, who works as a detailer in an auto mechanic facility in northern Virginia is a member of the national TPS Alliance that connects TPS recipients from all recipient countries.

He said he and his wife fall under TPS provisions while his eldest daughters are enrolled in DACA and his youngest two children are American citizens. The mixed status of those in his household has them concerned, he said.

“I don’t have a plan B,” Woodbridge said about not being able to remain in the United States.  “ was planning my future before.  I got my roots over here already.

Bastien and others argue that TPS should remain in effect because Haiti and El Salvador are not suitable for return.

They point to a study by the Center for Law and Social Policy that said the devastation from the 2010 earthquake in Haiti, including cholera, widespread poverty and most recently a diphtheria outbreak, would only be worsened if the Haitians under TPS in America return now.

“If you look at the laws pertaining to TPS, you’ll find that Haiti not only qualifies for continuation of TPS but that it qualifies for renewal of TPS,” Bastien said.

Meanwhile, El Salvadorans who return would fall prey to vicious, highly organized gangs who now control about 60 percent of the country, they argue.