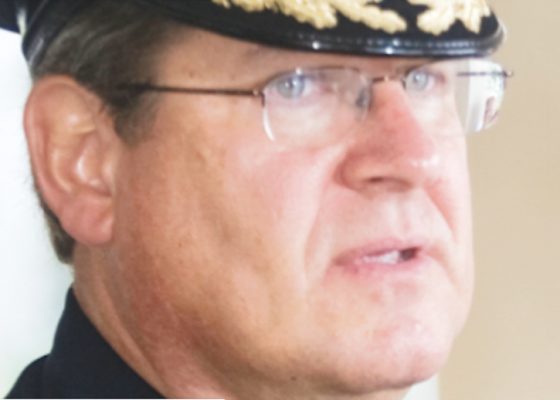 Police in Massachusetts are searching for the culprit who wrote a racial slur on a historic African American museum, an act the police chief called “immature.”

The “immature” message left on the African Meeting House, which is also part of a museum, was “N****R LEAVE.” Also next to the slur was a phallic symbol.

“My first impression of that is … we’re dealing with somebody who is obviously very immature,” Nantucket Police Chief William Pittman told the Boston Globe. “It’s probably more mischievous than it is sinister, but their choice of location couldn’t have been worse.”

In a press release posted on social media the police department called the graffiti “an act of hate directed at persons of color.”

The population of Nantucket, Mass., is about three quarters white and just 10 percent Black.

Charity-Grace Mofsen, manager of the African Meeting House, told the Inquirer and Mirror she “broke down” hysterically when she discovered the hateful message.

“It was incredibly hurtful. In a sense, it just feels like nowhere’s safe,” she told the Boston Globe in an interview.

“To see this place that is such a tight-knit community and so peaceful — we’re not exempt,” she said. “We’re still dealing with the same issues that you would find in the South, or the small-town Midwest. It’s everywhere.”

When news broke of the graffiti, dozens of residents turned out to help clean the building — a glimmering light of unity in the wake of an awful situation.

“Nantucket has such a rich history, it’s what brought me to the island,” Mofsen said to the Inquirer and Mirror. “Seeing how whites and Blacks and natives were able to figure out how to live and work together so early on. So to see that once again we have people coming together when they see that something is wrong and hateful, we get together and say ‘this is not what we stand for, this is not what our island is about.’ I think it is good to see people come out and show their support.”

Even if the person who committed the crime is a juvenile, the act itself should not be taken lightly. In the days following President Donald Trump’s election, hate crimes spiked across the country. Southern Poverty Law Center (SPLC) reported that in the 10 days after Election Day, 867 hate crimes occurred across the country — meaning they occurred at a rate roughly seven times higher than the national average. Of those crimes, 187 took place at a school for grades K-12. More crimes were only reported in “public spaces.”

As DiversityInc reported in November 2016:

“Earlier this month, the FBI released its annual hate crimes report, revealing that 5,818 single-bias incidents occurred in 2015. This averages about 112 incidents per week — a fraction of the average seen since the election.

“In 2015, on average, 115 racially motivated hate incidents targeting people of all races occurred every 10 days. In the 10 days following the election, there were more anti-Black incidents alone — 187.”

The Bureau of Justice Statistics estimates that two-thirds of hate crimes are never reported, meaning the statistics likely do not even tell the whole story.

Hate continued to spill into 2017, according to SPLC’s Intelligence Report:

“If 2016 was the year of white supremacists being electrified by the rise of Donald Trump, his inauguration in January sent them into a frenzy. They believed they finally had a sympathizer in the White House and an administration that would enact policies to match their anti-immigrant, anti-Muslim and racist ideas.

“Throughout the year, Trump thrilled and comforted them with his apparent kinship and pugilistic style, his refusal to condemn hate crimes committed in his name and his outrageous statements equating neo-Nazis and anti-racist activists after the deadly violence in Charlottesville.”

“A post-Charlottesville Washington Post/ABC News survey found that 9 percent of Americans — about 22 million people — thought it was fine to hold neo-Nazi or white supremacist views. And racists were reminded in January that they still have a sympathetic ear in the White House when Trump referred to Haiti and African countries as ‘shitholes.’ Whatever the tactical losses the hate movement is suffering because of Charlottesville, the longer-term trend — in particular due to America’s changing demographics and Trump fanning xenophobic flames — will continue to fuel a white nationalist backlash in the coming years.”