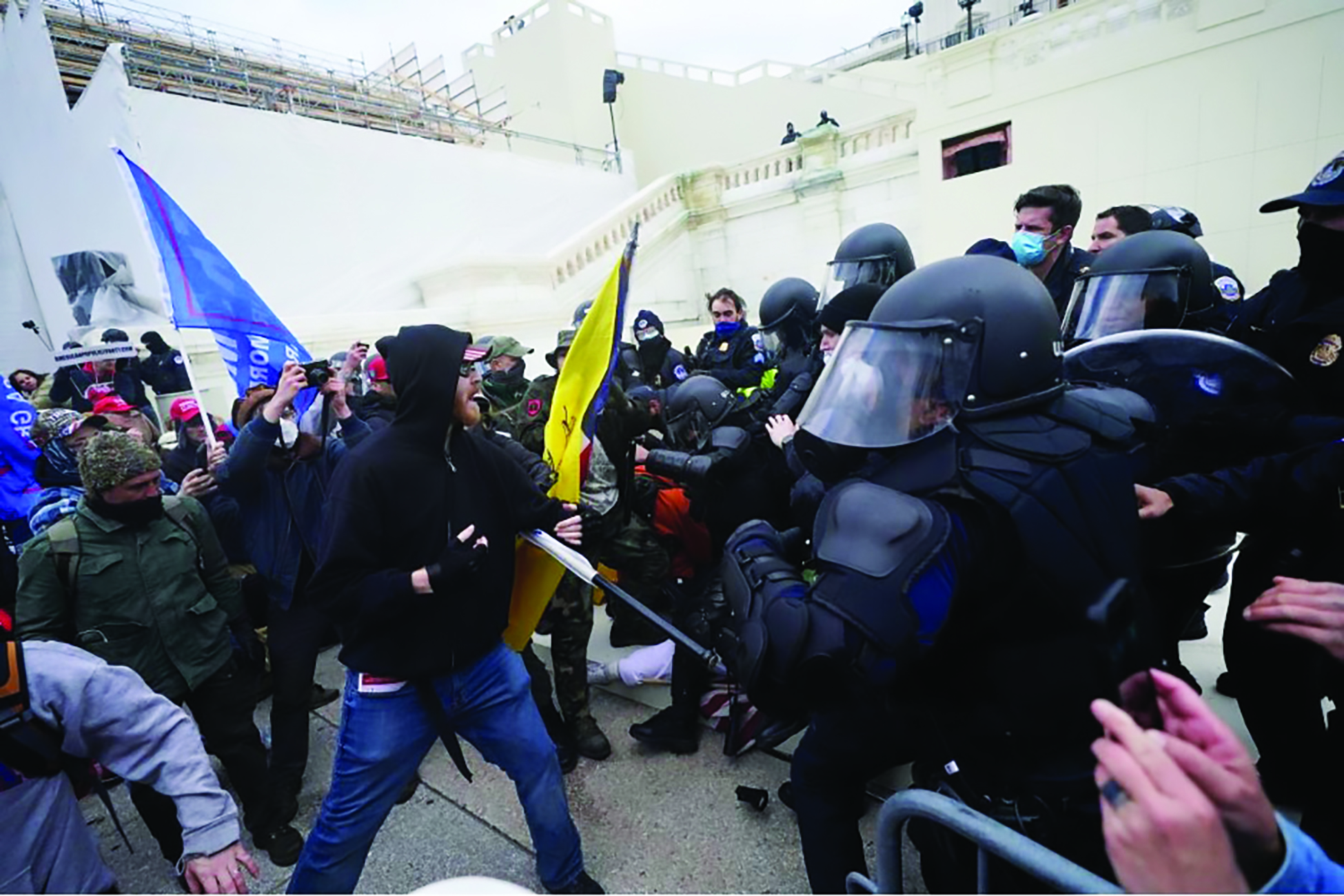 Remembering the Role Race Played in the Capitol Insurrection

The January 6, 2021 insurrection was about unsubstantiated claims of a stolen presidential election, rioters overtaking and vandalizing one of our nation’s most heavily secured buildings, threats to congresspersons who were inside the Capitol that day, and insufficient accountability for a U.S. President who incited violence and did far too little to swiftly extinguish it. On this one-year anniversary, we must also remember that the Capitol insurrection was about several racial realities in the United States.

It is important to remember who executed the assault on our democracy a year ago. No one at the Capitol was able to take official demographic stock of who the rioters were. But based on photos and videos from that day, few insurrectionists appeared to be people of color. The overwhelming majority appeared to be white. Most were white men. Our historical memory and analysis ought not focus only on what, how, and why, but also on who. Hundreds of white Americans were led to falsely believe an election had been stolen from them, and their violent response resulted in five deaths and the injuries of 140 law enforcement officers. They felt entitled to an election their candidate lost by nearly 7 million votes.

In addition to white entitlement, the insurrection was also about white privilege.

Miraculously, Capitol Police fatally shot only one rioter, Ashli Babbitt, as she and others attempted to force their way into the building. As we watched televised news coverage of the attack, several other black Americans and I immediately noticed the race of the rioters and we reached the same conclusion: had the insurrectionists been Black, many more of them would have been shot and killed. I vividly recall why we felt this way.

Just seven months prior, Americans (many of them Black) peacefully gathered outside the White House to protest the murder of George Floyd. The National Guard pushed and fired tear gas at them as President Trump walked through the crowd to a church where he posed with an upside-down bible. A heavy police presence also awaited others across the country who marched for black lives in June 2020. So why, then, was there not a heavier police or military presence on January 6? Probably because most of the people involved were white. Not being killed, or at least met with a significantly more militarized response, was a privilege afforded to the mob of predominantly white male protestors that day.

According to the U.S. Department of Justice, more than 725 people have been arrested for their participation in the Capitol Insurrection by the end of 2021; only 31 had been sentenced to jail. This also, therefore, makes January 6 about white accountability (or the lack thereof). According to Pew Research data, 77 percent of the current U.S. Congress is comprised of white members. Just imagine if a mostly Black group of rioters overtook the Capitol during one of their joint sessions, and the Vice President of the United States and all the lawmakers had to be urgently herded to a secure location. Again, several other people of color (and some white people, too) remain convinced there would have been a massacre that day. And surely, far more than 31 of the Black survivors would have been immediately incarcerated and more harshly punished. There would have been far less gaslighting about what actually occurred that day, and much more bipartisan agreement on consequences.

Let us also remember the race of the president who incited this insurrection. He is white. Results from a recent survey shows that only 27% of republicans believe Trump bears a “great deal” or a “good amount” of blame for the January 6 attack (compared to 92% of democrats). Had President Barack Obama done any version of this, even with only 14 days left in his presidency, immediate action would have been taken to swiftly remove him from office and hold him significantly more accountable. There certainly would have been more bipartisan agreement among a congress that is three-fourths white about Obama’s culpability. We must remember that white presidential privilege, plus white entitlement, afforded Trump the ability to inspire chaos and violence without accountability.

On this first anniversary and for years into the future, we ought not erase the racial realities of the Capitol Insurrection. People of color cannot overtake a federal building because an election did not yield the outcome we wanted. Why so many white persons were allowed to do so must remain a question for our collective analysis as we continue making sense of the insurrection. Despite ongoing legislative attempts to deny America’s schoolchildren the truth about our nation’s racial history, we cannot teach them that January 6 was only about the ‘big lie’ of a stolen election. Citizens of all ages and across all racial groups deserve to understand the racialized double standard that was on full display for the world to see last January. Fairness and justice in our democracy requires us to acknowledge this double standard, learn from it, and actively resist future manifestations of it.

Dr. Shaun R. Harper is the Clifford and Betty Allen Professor at the University of Southern California and executive director of the USC Race and Equity Center.