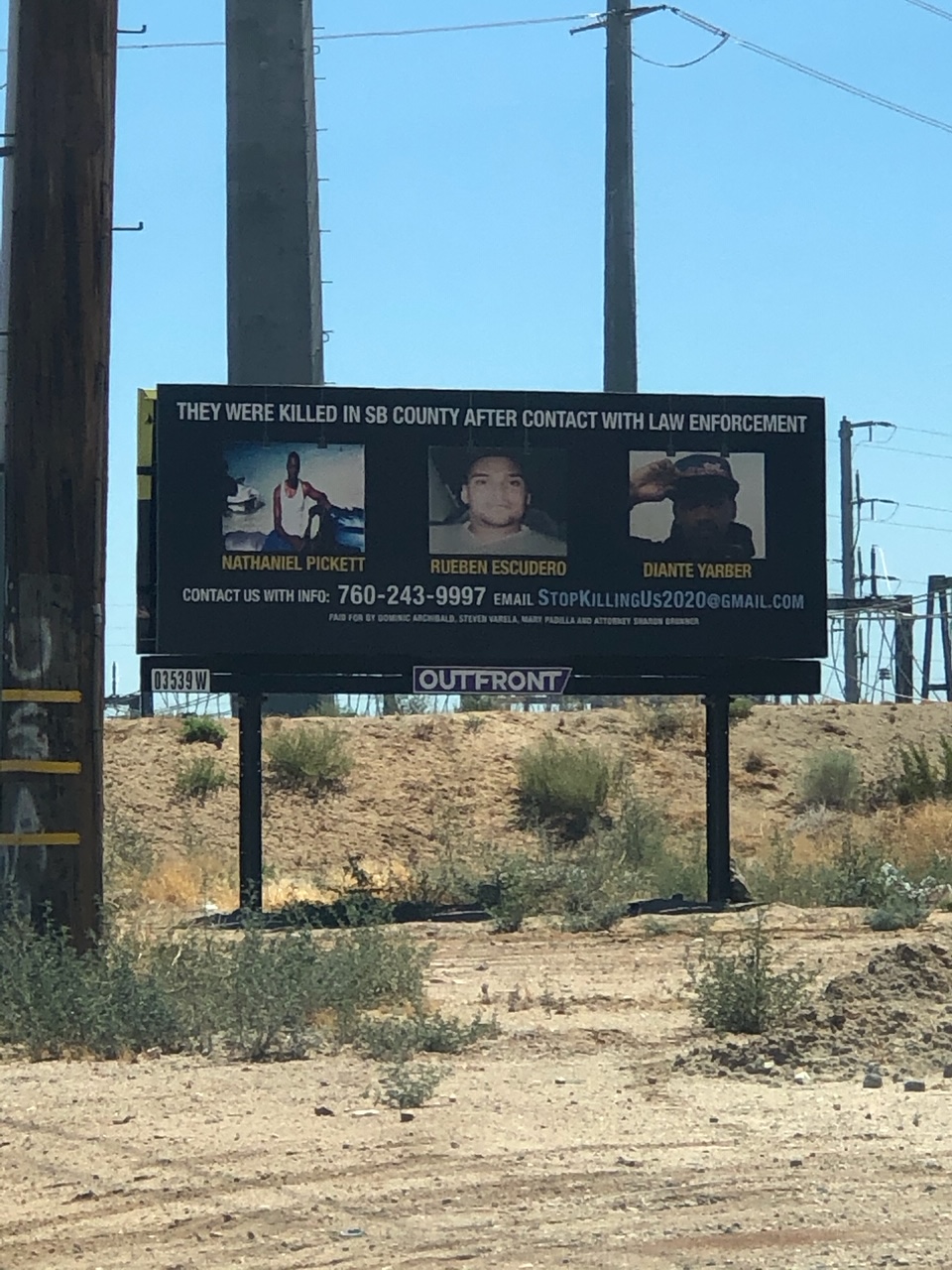 Two of these billboards (pictured below) have been spotted on Highway 18 and Highway 395 in San Bernardino county recently. Feel free to utilize the information provided if you are interested in seeking justice for these three young men.

Below, you will find the stories behind all three of these young men and their altercations with police which led to their deaths.

Diante Yarber, who was driving his cousin and friends to the store on April 5, never made it home.

Another young and unarmed father was killed by police after the fatal shooting of Stephon Clark.

Diante “Butchie” Yarber, a 26-year-old father of three, was driving his cousin and friends to a local Walmart store in Barstow, California, two hours outside of Los Angeles, on April 5. In broad daylight, police officers fired what sounded like 30 quick, consecutive shots into Yarber’s packed car, killing him and injuring a woman in the vehicle, The Guardian reported. Within seconds, his life was cut short in another law enforcement-involved shooting that raised more outrage about what activists have said is the disregard of Black lives.

His life mattered, and it was taken away in a barrage of bullets.

Statements are routinely released by police to explain the encounter, shaping a defense of an officers’ actions in most cases. Officers alleged that Yarber was “wanted for questioning” in a car theft case and slammed into their vehicle, however, the man’s family and their attorney argued that the young father posed no threat. They believe that he should have never been treated as a suspect, a sentiment that many people of color also echo in cases of unarmed men being killed by cops.

“The police took him away for no reason,” Brittany Chandler, the mother of Yarber’s 19-month-old daughter, Leilani, said, according to The Guardian. “The police should be held accountable for this … They are sick people for them to be able to shoot someone down in broad daylight.”

The investigation has shown that Yarber was unarmed and “not in the path” of the cop vehicle — facts that indicated officers should never have discharged their weapons, Dale Galipo, an attorney representing the woman hit and injured in the car, said. The officers in the shooting are on paid administrative leave, a police spokesperson said. No word yet on if they will be fired and if charges will be made.

But activists have been out on the streets in their fight for  Yarber. Eighty to 100 people marched in Barstow last week, the VV Daily Press reported, with more protests likely to happen. They have a simple but powerful message: no justice equals no peace.

By the Associated Press and Danielle Zoellner For Dailymail.com

A federal court jury has awarded $33.5million in damages to the parents of a man who was fatally shot by a Southern California sheriff’s deputy.

Nathanael Pickett, 29, was killed in a confrontation with San Bernardino County deputy Kyle Woods in November 2015.

The jury found Wednesday that Woods unreasonably obtained the 29-year-old, delayed medical aid and was negligent in use of deadly force.

The award included $15.5million in compensatory damages and $18million in punitive damages.

Sheriff’s officials tell the Los Angeles Times and the Southern California News Group that the department strongly disagrees with outcome of the trial and the verdict will be appealed.

‘Our attorneys, the department and the county will be discussing appealing the jury’s award,’ said Sheriff’s Department spokeswoman Cindy Bachman.

The shooting occurred outside the El Rancho Motel in Barstow, California, which Pickett had recently moved into.

Woods was on patrol when he saw Pickett look back at him several times while crossing the road before disappearing.

The deputy assumed Pickett had jumped the fence to the motel and was trespassing, so he followed him.

When Woods approached Pickett, the man allegedly gave a false name and appeared to be intoxicated, according to the police filing.

Woods claimed he tried to detain Pickett, but he ran and then jumped on the deputy before punching him multiple times.

The deputy then allegedly warned Pickett that he would shoot him while pulling out his gun.

The county argued that Pickett grabbed for the gun, which prompted Woods to shoot because he ‘feared for his life’.

But plaintiffs’ attorney Dale K. Galipo contended the assault account was made up.

During the trial, Galipo showed surveillance footage from the motel which doesn’t feature Pickett throwing any punches or grabbing the deputy’s gun.

A witness who saw the altercation also claimed he never saw the Pickett throw punches or grab the gun.

Galipo also showed pictures of Wood an hour after the incident and said the deputy doesn’t appear like he was punched multiple times.

After deliberating for two hours, the jury awarded the parents $33.5million in damages, which experts say is among the largest awarded in a police shooting cases.

Below you can read the statement of facts on the incident involving Rueben Escudero and the San Bernardino County Sherriffs Department on October 19th, 2019.