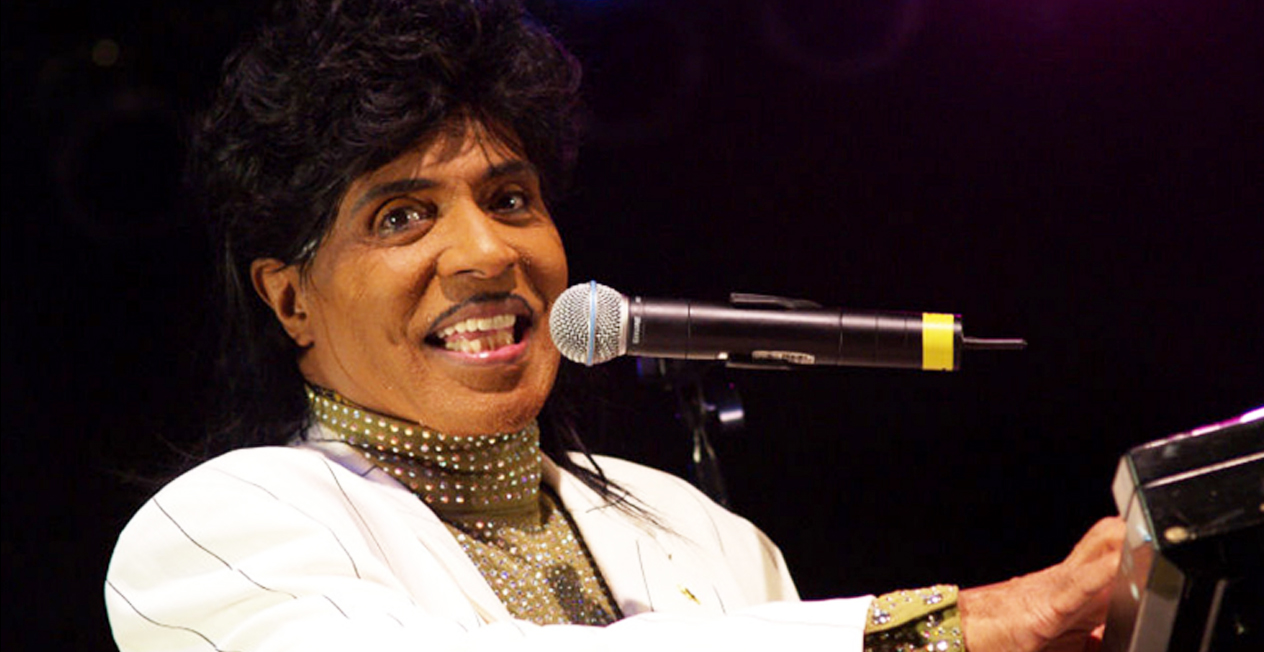 “Tutti Frutti” (1955), one of Richard’s signature songs, became a hit reaching the No. 2 on the Billboard chart. Another hit, “Long Tall Sally” (1956), hit No. 1 on Billboard. “Tutti Frutti” was added to the National Recording Registry of the Library of Congress in 2010 and cited for its “unique vocalizing over the irresistible beat announced a new era in music”. Two of his songs,”Tutti Frutti” and “Good Golly, Miss Molly” were listed on the Rock and Roll Hall of Fame’s 500 Songs that Shaped Rock and Roll.

Little Richard’s music was covered by several artists thereafter and his influence included The Beatles, who opened for Little Richard as he toured Europe in 1962. He also advised Paul McCartney on his distinctive vocalizations. Little Richard influenced Otis Redding, James Brown, Mick Jagger, Keith Richards, John Lennon and Cliff Richard and those influences frequently showed up in their music.

Legend has it that James Brown came up with the Famous Flames debut hit, “Please, Please, Please”, after Richard had written the words down on a napkin. Redding started his professional career with Little Richard’s band, The Upsetters. Bob Dylan performed covers of Little Richard’s songs on piano during a high school talent show with his rock and roll group, the Golden Chords. In 1959, Dylan wrote in his yearbook under “Ambition”: “to join Little Richard.”

Many Rock critics noted the similarities between Prince’s androgynous look and vocal style to Little Richard.

In 1963, Richard agreed to assist a failing tour effort by The Everly Brothers, Bo Diddley and The Rolling Stones and was given his own TV special after the tour ended.

Penniman’s performances, like most early rock and roll shows, resulted in integrated audience reaction during an era of strict segregation in the South. On tours that included groups of music stars, Little Richard and other artists such as Fats Domino and Chuck Berry would allow audiences Black and white to enter buildings via the same door but sit in separate places — but everyone would dance.

Vocal supremacist groups such as the North Alabama White Citizens Council warned that rock and roll “brings the races together.” The universal popularity of Little Richard killed the myth that black performers could not successfully perform at white-only venues.

Little Richard’s high-energy performances while playing the piano included dancing on top of the piano, running on and off the stage and throwing souvenirs to the audience. He also dressed flamboyantly onstage. Some of what is taken for granted now in popular music was invented by Little Richard.

Little Richard was ranked eighth on its list of the 100 Greatest Artists of All Time and Rolling Stone listed three of Little Richard’s recordings, “The Girl Can’t Help It”, “Long Tall Sally” and “Tutti Frutti”, on their 500 Greatest Songs of All Time.

Little Richard was the third of 12 children of Leva Mae and Charles Penniman. His father was a church deacon and his mother was a member of Macon’s New Hope Baptist Church.