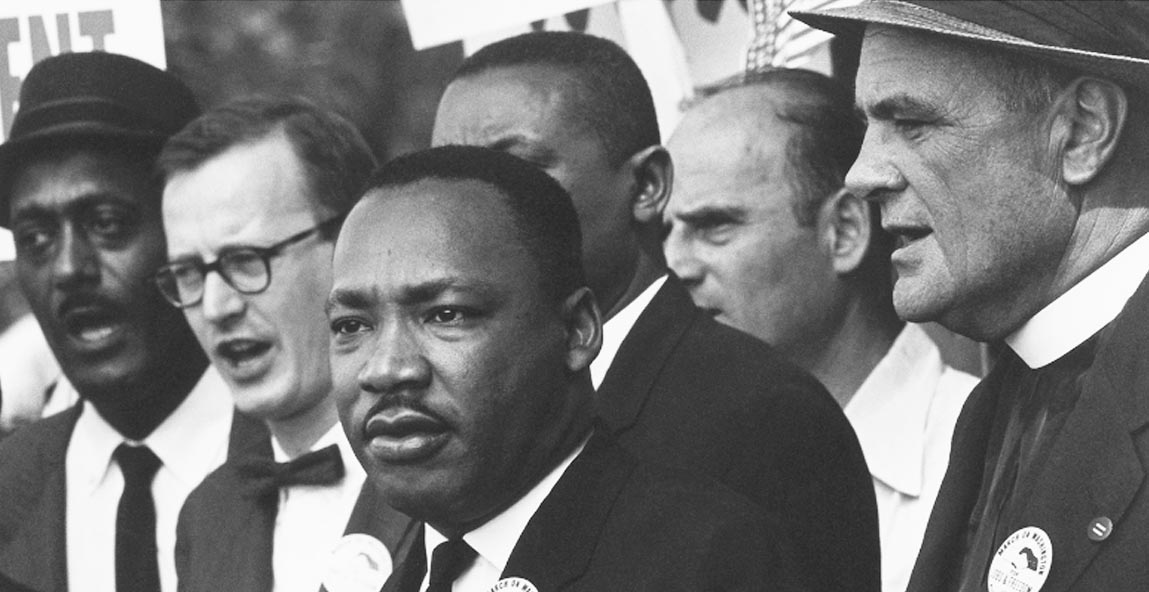 “Do not conform to the pattern of this world, but be transformed by the renewing of your mind,” a scripture reading from Romans 12:2.

Transformation is something the Reverend Doctor Martin Luther King, Junior was in pursuit of. He was seeking to fulfill his God given dream to help lead all people to the promise land of true brotherhood. On this national holiday we observe the birthday of Martin Luther King Jr., a drum major who followed the drumbeat of a different drum. He did not follow the world’s cadence of anger, discord and violence but chose to operate in the unforced rhythm of God’s grace to take a stand against racism, militarism, injustice and poverty. He sought to serve others in his quest to achieve equality in civil and economic rights for Black Americans, along with a demand for criminal justice reforms.

In 1963, I remember as a child sitting at home in Hagerstown, Maryland with my mother and grandmother in our living room watching a network news report on the March on Washington for Jobs and Justice. The report showed Dr. King delivering what would become a speech literally heard around the world and echoed throughout history, “I Have A Dream.”

It was a dream that set into motion the transformation of race relations in America. Dr. King’s leadership in the non-violent struggle for civil rights earned him the distinction of being called a “drum major for justice, a drum major for peace.”

But to his four children, he was simply known as “daddy.”

Dr. King was mindful of his children when he delivered his famous address, “I have a dream that my four little children will one day live in a nation where they will not be judged by the color of their skin but by the content of their character.”

Dr. King’s youngest child, Bernice King, has followed in her father’s footsteps, becoming an ordained minister and continues his legacy. She believes that her dad’s dream for his children to be judged by the content of their character has, in many ways, become a reality. She says, “new generations of people have benefited greatly because of the dream but we still have more work to do.”

King recently talked to me about her reflections of her father. Her dad’s incredible contribution to the world, she explained, is a result of his extraordinary faith in God. As I talked with her, she told me that everything her daddy did, came out of his personal commitment to Jesus Christ.

King recalls how her dad’s deep faith helped him overcome the pressures from leading the non-violent struggle for Civil Rights, particularly when the burden became too heavy to bear: “I remember in the beginning when he was about to give up because he got a call that threatened to blow up his home where my mom and my sister were. He was in the kitchen and just before midnight, he told God; I’m at the end of my powers. I’m just down here trying to do right. Why do I have to deal with all of these evil and wicked people? Why are people so mean-spirited? Why can’t people understand goodness and the good works we’re trying to do? Why is there so much hate?”

King continued that her dad had grown weary and felt he could not continue; he was at the end of his rope. She explained to me; “It was at that point that he said he heard the voice of God say; “Martin Luther King, Junior! Stand up for justice! Stand up for righteousness! And I will be with you until the end.”

Essentially, Dr. King went through what I refer to as a “Jesus in the garden of Gethsemane” moment. King was facing the very real threat of death for seeking to do what was right in the eyes of God. He knew in the eyes of man, if he would continue to carry his cross of love for humanity, the very depravity of mankind could crush him and his family. But from that encounter with God in his kitchen, his extraordinary faith compelled him to keep moving forward with his noble cause, even in the face of death.

Scripture tells us when we encounter adversity as King surely did, “We are hard pressed on every side, but not crushed; perplexed, but not abandoned; struck down, but not destroyed. Therefore, we do not lose heart.”

Of her daddy’s accomplishments, Bernice humbly says, “It’s emotional to know that you’re connected to a man who had such a great impact on this world. It’s a humbling experience to know that he’s my dad.”

Dr. King, a dedicated Baptist minister with brilliant oratory skills, the academic prowess of a scholar, and the wisdom of a prophet, faithfully and courageously challenged America to embrace his dream of a better, stronger and united America. I asked Bernice how we have gone astray in fulfilling that dream.

“It goes back to economics and spirituality. Those two issues I think are very critical. And the whole fervor of materialism in our society and self-centeredness has taken us away. And so, instead of people focusing on God first and everything else next, we’ve reversed those priorities. So, our values and our priorities are off.”

She adds; “Daddy talked about this in 1967. He forewarned that if we’re not careful, we will become a “thing” oriented society and not “people centered” and all of these different crises are going to emerge. And that’s what’s been happening.”

With that, King’s daughter acknowledged how the world has shattered her daddy’s dream. She points out how we are still confronted with poverty, crippling illiteracy, poor education, and senseless violence. “You think about what happened in Newtown, Connecticut. I mean that should have jolted us like nothing else. We saw 6-year-olds losing their life so senselessly. I’m thinking about Chicago and all of those young people who are killing each other. What has happened to a society that has turned away from that kind of situation and not realize this speaks to who “we are.” as a nation and a cancer in our society. The situation with Trayvon Martin, everyday there are several Trayvon Martins; not in the black community but in the Hispanic/Latino communities and other communities.

Were he living today, Dr. King would listen to politicians, civil rights and faith leaders agitate bloviate, instigate and aggravate. Then he would seek to elevate, motivate and demonstrate God’s view for healing the painful wounds of the past and bridge the deep divide with the bonds of reconciliation.

In 1963, as he sat in a Birmingham jail, he wrote about becoming an extremist to deal with the extreme issues of hate and division.

He advised Americans to become more like Jesus as an extremist in love — “your enemies, bless them that curse you, pray for them who despitefully use you.”

Reflecting on King’s legacy, we would serve ourselves well if we could follow his example of spiritual depth, courageous leadership and unselfish service. Like King, we must seek transformation by the renewing of our minds. Let us remember that Dr. King did not conform to the culture of hate but followed the pattern of love. He said; “I have decided to stick with love. Hate is too great a burden to bear.” Let’s continue the King dream and legacy by boldly and courageously spreading God’s love, freedom and peace.