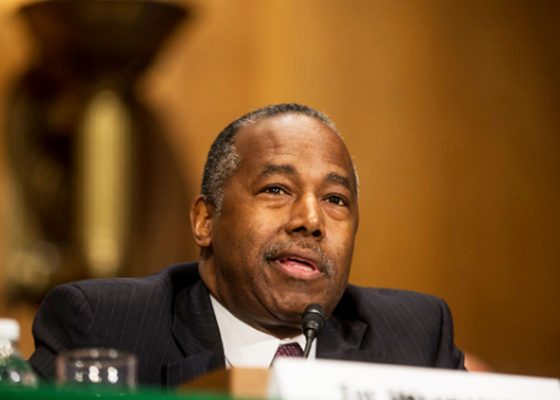 The Department of Housing and Urban Development is charging the city of Hesperia, Calif., and San Bernardino County with violating the Fair Housing Act by discriminating against black and Latino residents, according to HUD officials.

The Department of Housing and Urban Development is charging the city of Hesperia, Calif., and San Bernardino County with violating the Fair Housing Act by discriminating against black and Latino residents, according to HUD officials.

The complaint — only the second initiated by Secretary Ben Carson during his tenure — charges that Hesperia’s city council enacted an ordinance in 2015 intended to drive out minority residents. The ordinance required landlords to incorporate a crime-free clause into leases that mandated the eviction of an entire household for a single instance of criminal activity by a resident or guest.

Between January and December 2016, at least 137 households, comprising 258 people, lost housing because of the ordinance, according to HUD’s investigation, and at least 75 applicants failed the new mandatory tenant screening.

“In enacting and enforcing the Ordinance, Respondents intentionally targeted Hesperia’s Black and Hispanic residents,” HUD alleges, according to a copy of the charge obtained by POLITICO. It says that “during the City Council hearings on the Ordinance, City officials made disparaging statements targeting groups that are predominantly minority and more likely to live in majority-minority areas.”

A council member allegedly said that while “not all people in Section 8 are bad people,” Hesperia had “issues with a lot of the Section 8 housing” and the ordinance would “straighten things out,” according to HUD. Low-income tenants can rent from private landlords with housing vouchers under HUD’s Section 8 program.

“HUD is committed to ensuring that people can live where they choose free from discrimination,” Carson said in an e-mail. “We are not going to allow minorities to be denied a place to call home simply because of how they appear. HUD will hold local communities accountable if they allow or create loopholes that evade our country’s fair housing laws.”

Hesperia officials and the San Bernardino County Sheriff’s Department did not immediately respond to requests for comment.

Carson has come under fire in the past for his handling of fair housing issues. Civil rights groups unsuccessfully sued him last year over his decision to delay implementation of an Obama-era anti-discrimination rule, which Carson had previously likened to “social engineering” in a 2015 op-ed.

HUD also proposed a rule in August that would make it more difficult to bring discrimination claims under the Fair Housing Act by requiring plaintiffs to clear a higher bar to prove unintentional discrimination known as disparate impact.

Critics have also noted that Carson uses the secretary-initiated complaint tool to crack down on discrimination more rarely than his predecessors. He initiated his first complaint in August 2018 — almost a year and a half after he assumed his post — a move that led to HUD charging Facebook with housing discrimination over its advertising practices in March.

Yet this isn’t the first time Carson has gone after California government officials for discrimination. The department in July threatened to withhold $80 million in federal funding from Los Angeles over the city’s alleged discrimination against people with disabilities. HUD and L.A. reached a deal in August to improve disability access in city housing.

Hesperia’s crime-free ordinance, meanwhile, has already been challenged in court.

The American Civil Liberties Union Foundation of Southern California filed suit against the city and San Bernardino County Sheriff John McMahon in 2016. The group alleged that “rather than participate in statewide efforts to safely reintegrate individuals with criminal records into the community, defendants have enacted and enforced municipal ordinances designed to exclude such individuals from housing in the city.”

HUD’s charge, which seeks damages and “the maximum civil penalty,” will be heard by a U.S. administrative law judge.