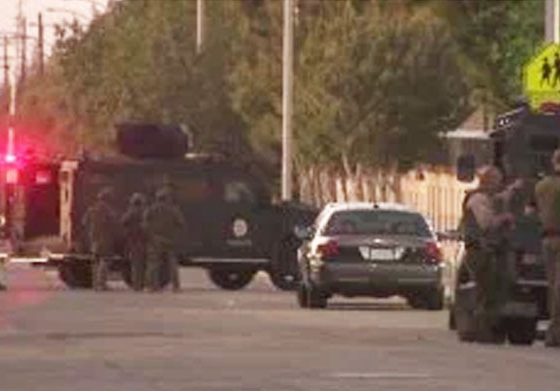 The reported shooting of a sheriff’s deputy in Lancaster this week in what authorities previously described as a “targeted attack” that triggered a massive manhunt was a hoax, sheriff’s officials said Saturday night.

SWAT teams responded to Lancaster after a shooting left a deputy injured in Lancaster on Aug. 21, 2019. (Credit: KTLA)

Authorities first described Wednesday’s 2:45 p.m. incident outside the the Los Angeles County Sheriff’s Department Lancaster station as a shooting, then said the following day that the involved weapon may have been a pellet gun, rather than a firearm.

But sheriff’s officials announced late Saturday that Deputy Angel Reinosa, a rookie deputy with the department, made the whole thing up.

Detectives met with Reinosa on Saturday for a follow-up interview about the incident, Capt. Kent Wegener of the Sheriff’s Homicide Bureau said.

“Deputy Reinosa admitted that he was not shot at from the apartment complex area, as he had initially claimed,” Wegener said.

“There was no sniper, no shots fired and no gunshot injuries sustained to his shoulder. Completely fabricated,” Wegener said.

Sheriff’s officials said in previous days that the deputy was walking to his personal car when he was shot in the shoulder. The shot was believed to have been fired from a nearby apartment building, Lancaster Mayor R. Rex Parris said.

The deputy suffered what was described as a superficial, “very minor” injury.

The following day, authorities announced that they had recovered a pellet rifle in connection with the investigation.  The deputy’s uniform, which contained damage “consistent with a gunshot,” sheriff’s officials said in a written statement.

Deputies, including a SWAT team, conducted a search that lasted until the following morning before the effort was called off. No suspect was found.

The pellet gun initially seized in connection with the investigation has since been determined to have been uninvolved, Wegener said.

Reinosa admitted cutting two holes, which he had claimed were caused by gunfire, in his own uniform with a knife, the lieutenant said.

The reason for the alleged hoax was unclear.

“Reinosa failed to provide information regarding his motivation for this act,” according to Wegener.

A criminal investigation into the deputy’s conduct has been initiated, Undersheriff Robin Limon said.

“It’s extremely disappointing,” Limon said. “We expect our deputy sheriff’s are held to a higher standard, and unfortunately, in this case, he did not act to that standard.”

Limon said she regretted the commotion caused by what officials now believe was a concocted story by the deputy.

“I apologize for the inconvenience that was imposed on you,”she said.

Investigators planned to turn over their findings to the Los Angeles County District Attorney’s Office for consideration of charges, officials added.