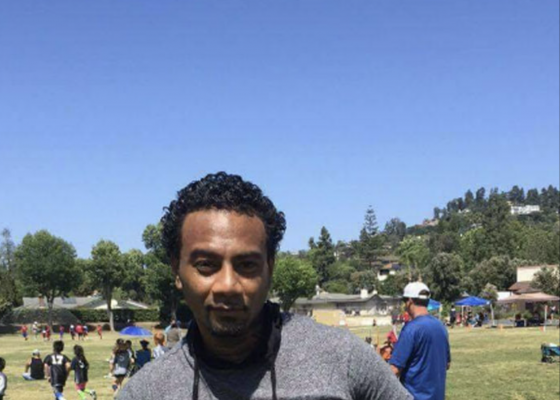 Darrell Allen and his 2 oldest boys

Darrell Allen and his 2 youngest boys

ADELANTO, CA- For communities of color, the all too familiar singing of bullets was heard in Adelanto on July 10 when deputies from the San Bernardino County Sheriff’s Department arrived at an apartment complex on Poinciana Road, due to an alleged domestic battery charge lodged against Darrell Allen.  The thirty-two-year-old Black man and his girlfriend were engaged in a dispute according to witnesses, many of whom have gone silent recently.  After she called the police, he allegedly left the apartment and went into a laundry room across the street.  This is where he was when deputies made contact with him that fateful afternoon that proved to be Allen’s last minutes on earth as a hail storm of bullets tore into Allen’s body.  There are two versions of why this atrocity occurred in the manner described above.  According to first reports from the authorities, Allen advanced towards the deputies with a knife.  Another version from a witness stated that Allen, shirtless, raised his arms and had no weapon in them.  Unfortunately, most of the witnesses are no longer speaking out.  However, his murder was witnessed by relatives, including a fifteen-year-old nephew, and two four-year-old’s who started to run toward the direction the shots came from.  They were allegedly told to “get their black a**** back or they would be shot”,   Question?  If he was fully compliant with orders why, as families of other murdered men of color ask repeatedly, was his body riddled with bullets, hence the subject of this article.  Murder by design!

For the nay sayers who will say: “he should have obeyed instructions”, this is not an isolated incident, according to attorneys Sharon Brunner and Jim Terrell, they have at least six open cases of “Murder by design”, the fatal shooting deaths of people, especially men of color by law enforcement.  Unarmed men!

According to reports from the attorneys, it appears that Allen was in full compliance with orders from the deputies.  FYI: this is why athletes kneel!!!

Members of High Desert Action Committee, a group of activists, and attorneys working to defuse the volatile situations that exist between communities of color and law enforcement will host a gathering August 7th, the combined press conference, in front of Adelanto City hall, 11600 Air Expressway at 5 pm and a barbecue at the adjacent park to discuss why another killing, and help those tired of the murders by design, exhale.

Darrell Allen was the dad of four children, a member of Christ the Solid Rock Church in Apple Valley, Pastor, Reverend Israel Riley.  The memorial services will be in Orange County, Friday, July 26, 2019.