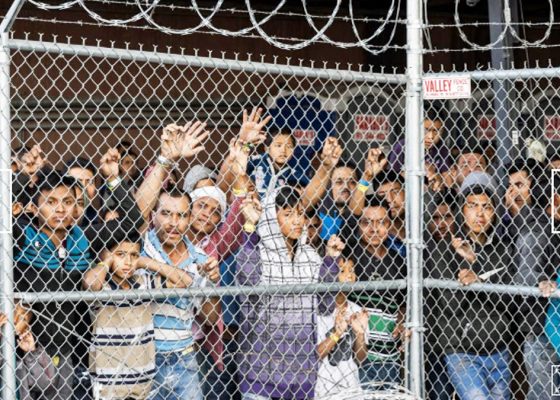 EL PASO, Texas, May 28 (UPI) — A continuing migrant surge on the southern border has overwhelmed detention facilities and left the U.S. Border Patrol scrambling to devise strategies about how to release asylum seekers.

As it seeks an elusive solution, the agency confronts a deteriorating situation, local officials, migrant advocates and policy analysts said.

“Our immigration system is full, and we are well beyond our capacity at every stage of the process,” Kevin McAleenan, acting secretary of the Department of Homeland Security, testified to a House committee last week.

In March and April, more than 200,000 migrants crossed the southern border illegally, many turning themselves in to the Border Patrol as asylum seekers. More than two-thirds of the arrivals crossed as unaccompanied children or adults traveling with children — populations that cannot lawfully be placed for long periods in migrant detention facilities.

“The immigration enforcement system is shutting down in certain parts of the southern border because it doesn’t have the capacity to handle the current inflow of asylum seeking migrants,” said Sarah Pierce, policy analyst at the Migration Policy Institute, a nonpartisan think tank based in Washington, D.C.

Pierce said that before the surge, Immigration and Customs Enforcement detained asylum seekers, processed them for immigration court dates and released them to a border community’s migrant shelter network so they could travel to stay with family and friends in the United States.

But because the agency lacks detention space, the Border Patrol has begun “direct releases” of large numbers of families into border communities.

“Much of the confusion and chaos at the border comes from this change in policy,” Pierce said.

Observers in El Paso, for example, report that the Border Patrol releases more migrants than the city’s shelters can hold, and does so in unpredictable ways, with little communication to volunteer coordinators.

“The flow of releases from the Border Patrol can be very choppy, and there’s no way to plan ahead,” said Ashley Heidebrecht, a social work student and intern at the Borderlands Rainbow Coalition, one of the local nonprofits that provides meals to migrants housed by Annunciation House, coordinator of the city’s migrant shelter network.

“After three nights, released migrants move out of the shelter set with travel plans,” Heidebrecht said. “But then the Border Patrol sends us more” than are moving on and “it can be very confusing.”

“Sometimes the agents tell us to expect 50 migrants, but we end up with 150. Other times, a bus filled with migrants will show up unannounced at a shelter.”

“The agency doesn’t seem to have any goals and is just operating as things come up, day to day. I really don’t know who is calling the shots,” Corbett said.

With El Paso’s shelter network stretched beyond capacity, the Border Patrol began to look for other communities in which to release migrants. The agency began to transport them for release in Las Cruces, N.M., about 40 miles from El Paso.

But when the shelters in Las Cruces filled up with 5,000 migrants, the Border Patrol turned to the next, yet much smaller, city along Interstate 10: Deming. The fairgrounds the city used to shelter migrants filled within days, and Deming’s city council declared a state of emergency.

Deming’s situation alarmed Glenn Hamilton, the sheriff of Sierra County just to the north. “Look what happened to Deming. The Border Patrol said it would send 200 migrants there. But they sent many more.”

Within two weeks of the Border Patrol starting direct releases in Deming, the town of 14,000 had received 2,400 migrants, sheltering up to 700 at a time in the fairgrounds.

“What they are doing worries me because we are a second-tier border county,” Hamilton said, “meaning that we are one county away from the border. Since the Border Patrol’s strategy has been like filling up a glass, first El Paso, then Las Cruces, then Deming, I am worried they will begin releasing migrants to Truth or Consequences,” the county seat.

Sierra County is 42,000 square miles and has 12,500 residents, about half of whom live in Truth or Consequences, about 75 miles from Las Cruces on Interstate 25.

Hamilton said Truth or Consequences does not have a bus station or bus stop, so migrants would be “stuck” and have no way … to continue their journeys.”

“So I got my staff together and we did a table-top emergency planning exercise based around the release of 150 migrants,” Hamilton said. “We figured out that all our resources would be exhausted within two days. Sierra County is New Mexico’s second poorest county. We don’t have the resources to deal with a humanitarian crisis.”

Hamilton said he contacted the Border Patrol in El Paso to learn about its release strategy.

“The Border Patrol is so overwhelmed, whatever it is doing is out of desperation,” Hamilton said. “The agents did tell me they wouldn’t release migrants to Sierra County because it is not a transportation hub, but they also said they couldn’t rule anything out and everything is on the table.”

One federal approach has been to try to move migrants farther from the border to communities with better transportation hubs. New Mexico’s Democratic Gov. Luján Grisham decided to pay for buses to transport migrants from southern New Mexico to Denver, Colo., about 650 miles away.

The first buses of 150 migrants arrived in Denver last week, and they are staying in shelters before heading to the homes of family and friends.

To relieve El Paso and nearby cities, the Border Patrol has considered flying migrants to South Florida. The agency recently sent an official to Palm Beach and Broward counties on the east coast to assess sending 270 migrants there from El Paso. His two visits provoked panic among local officials.

“We don’t know how or why they picked South Florida,” Palm Beach County Mayor Mack Bernard said in a telephone interview. “We are not equipped to deal with a humanitarian crisis. We are not prepared to feed, house or help arrange travel for migrants sent to South Florida.”

Broward County Mayor Mark Bogen said he and other local officials spent a day trying to confirm the information about migrant releases with the Department of Homeland Security.

“Nothing was managed. The dissemination of information was just horrible,” Bogen said in a telephone interview. “Nobody in the federal government would pick up a phone to call any local officials. They told the sheriff, but he’s a law enforcement officer. The sheriff isn’t in charge of finding shelter for the migrants.”

“Details regarding this immigrant placement strategy from the federal government have not been provided to the county, nor is there any evidence of a federal plan to address the basic needs of food, shelter and security for the arriving families and the impact on our community,” the statement read.

The local officials contacted Florida’s legislators and the state’s Republican Gov. Rick DeSantis, who also opposed the move. DeSantis said he contacted President Donald Trump and later confirmed in a tweet the plans to move migrants to Florida had been shelved.

County officials could not say whether the decision to leave South Florida out of the planning was definite.

“We don’t have anything concrete on paper,” Palm Beach County’s Bernard said. “What we heard is that Border Patrol is not seeking to release migrants in South Florida currently or at this time. Do those words give me pause? Yes, they do.

“This is how the Trump administration operates, through chaos and confusion. But I cannot operate a county with 1.5 million residents on chaos and out of control.”

“I don’t know what will happen in the future concerning migrants,” he said.