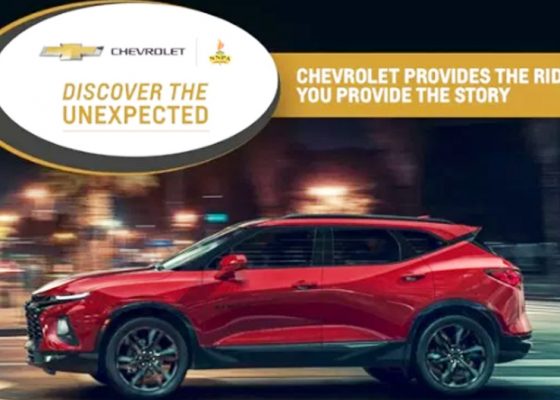 Since 2016, General Motors Chevrolet brand and the National Newspaper Publishers Association (NNPA) have partnered to provide deserving HBCU students with the exciting opportunity to “Discover the Unexpected”about themselves and their communities via a journalism fellowship program.

The Discover the Unexpected Journalism Fellowship (DTU), now entering its fourth consecutive year, provides six HBCU students with scholarships ($10,000 each), stipends ($5,000 each), an eight-week fellowship with two of the nation’s leading Black news publications, and the “road trip of a lifetime” in the all-new 2019 Chevrolet Blazer.

Each year, a selection of four NNPA Publishers provide the fellows with the opportunity to gain real-world journalism experience during the eight-week Fellowship Program.

Recently, host NNPA publishers, along with NNPA president and CEO, Dr. Benjamin F. Chavis, Jr., reflected on the success of the program from 2016 to 2018.

“The issues of diversity and inclusion are of paramount concern for corporate America. The NNPA has a productive relationship with General Motors specifically focused on providing scholarships and opportunities to the emerging generation of African American journalists and publishers,” said Chavis. “Discover the Unexpected has been an excellent model for highlighting the importance of freedom of the press and academic excellence.”.

NNPA Chairman and Chicago and Gary CrusaderPublisher Dorothy R. Leavell, whose Crusader Newspaper Group will be one of the 2019 host publishers, stressed the importance of the partnership and the resulting opportunities provided to the aspiring Black journalists attending the nation’s HBCU’s.

“This experience, I believe, has given those students a leg up on pursuing a career in journalism and it’s my personal hope that they will lend their journalistic talents to the Black Press by returning to one of our member newspapers,” Leavell said.

The Washington Informer, The New Journal and Guide in Norfolk, Va., The Carolinian in Raleigh, N.C., The New York Amsterdam News, the Chicago Defender, The Michigan Chronicle and The Atlanta Voice, are among the NNPA member newspapers that have worked with DTU Fellows. They will be joined this year by The Chicago Crusader and Houston Forward Times.

“The staff of The Washington Informer and I are pleased to work with students from participating HBCU’s who come readily prepared to share 21st century knowledge and tech skills that enhance the reporting and story-telling experiences we offer with the Black Press, including vehicles that make it even more possible to Discover the Unexpected,” said Washington Informer Publisher Denise Rolark Barnes.

“General Motors believes as we do — as Black newspaper publishers — that the Black Press is important, relevant and significant to telling the story and speaking truth to power on behalf of African Americans. As a member of NNPA, I also believe it is our duty to pass the baton, as it was passed to us, to the next generation of media professionals and owners whose responsibility it will become to shape the future of the Black Press,” said Barnes.

Brenda H. Andrews, Publisher of the New Journal and Guide (NJG) in Norfolk, Virginia, hosted three HBCU students for four weeks as part of 2018’s DTU program. In addition to assignments from NJG’s publisher and editor, Fellows were given the opportunity to develop their own story ideas with accompanying photos and videos on a range of topics.

“I believe it’s important for young people and millennials to learn there is great value and purpose in writing for and/or using social media and new technologies in the Black Press,” Andrews said.

“To that end, one of my goals was to expose them to the rich history of the Black Press. Consequently, some of our time together was spent discussing the New Journal and Guide’s history since 1900 and the Black Press in general since 1827,” she said.

During one session, Andrews said the students spent an afternoon offsite watching and discussing the award-winning Black Press documentary, “Soldiers Without Swords.”

“It was especially heartwarming to hear the DTU team connect the similarity of today’s stories of police shootings of black males and the archival stories they had read about in the NJG,” Andrews said.

“Overall, it was a great intergenerational learning experience that merits repeating,” she said.

“The interns were bright, eager to learn and driven,” Jervay said, noting that one of her Fellows went on to work for the Obama Foundation and each remain active with the newspaper through occasional article submissions.

“Our relationship with the DTU Fellows was mutually beneficial,” she said. “They got to meet local and national celebrities, learn about writing for a newspaper as well as [many of] the aspects of running a business, while we got an upgrade on social media and insight into the next generation.”

Jervay added: “The internship was only for one summer but our connection is for a lifetime.”

Since the inception of the DTU program, NNPA members have “poured knowledge into the students and have seen their skill sets become more sharpened,” said Atlanta Voice Publisher Janis Ware.

“During the first year of the program, a couple of the Fellows were able to attend a rally for then-Presidential candidate Donald Trump. Last summer, the Fellows had an opportunity to interview Georgia Gubernatorial candidate Stacey Abrams, who made history as the first African-American woman to qualify for the candidacy for the Democratic Party,” Ware said.

“Year after year, the program exceeds my expectation because of the caliber of the Fellows who have been admitted into the program as well as the amount of support General Motors gives to ensure that the program continues to evolve,” she said.

The students in the program have not only displayed an eagerness to learn, but also a willingness to be challenged while continuing to rise to the occasion regardless of how difficult the assignment might seem, Ware said.

“We are thrilled to follow their careers, as many of the interns still maintain an active relationship with [the Atlanta Voice]. We are certain the future of this industry is in good hands,” she said.