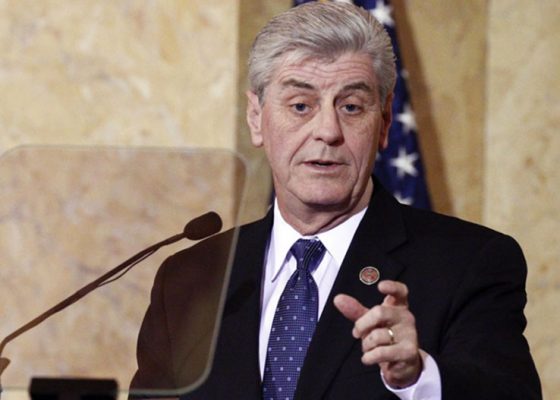 You know how there’s a hot rumor swirling around and everyone is waiting to see if the person it’s about will address it? That’s how I’ve been for the last two days as rumor on the internet swirls around Mississippi Governor, Phil Bryant. Bryant has made news in his own right with his extremely puritan Christian policies but now people are talking about him for a different reason.

Last week it came out that Carolyn Bryant Donham, then just Bryant, the woman who was the center of the Emmet Till murder trial, lied about Till whistling at her. News of Downham’s statement was released as part of an interview for promotion of a new book expected to hit shelves this week. Dr. Timothy Tyson interviewed Carolyn in 2007 in preparation for his upcoming book, “The Blood of Emmet Till.” For the first time, the woman whose husband and brother-in-law kidnapped a 14-year-old boy from his bed and brutally murdered him, in her honor, admitted her lie.

Many people hadn’t even realized the 82-year-old Carolyn Bryant (Donham) was still alive. The impending release of the book has brought her and Till’s murder back into the public spotlight again. As it often happens when rehashing historical events, people have been talking about the key players after the murder and trial. One name on a lot of lips is Phil Bryant.

Roy Bryant, Carolyn’s then husband, later admitted that he and his half-brother, J.W. Milam, beat and murdered Emmet Till after kidnapping him from a relative’s home. At least a year ago, someone started asking online if Mississippi Governor, Phil Bryant was really the nephew of Roy and Carolyn Bryant. I started to do my research and indeed, Roy Bryant had a sister named Estelle Bryant. Estelle Bryant, of Moorhead Mississippi, also happens to be the name of Governor Bryant’s mother.

Hearing the rumors, I started watching and digging at the same time. Watching for Governor Bryant to refute the claims and say that his mother was a different Estelle Bryant. Digging to see if I could find any concrete proof other than a much-shared tweet. While I watched and waited for Governor Bryant to make a public statement, I took note and screen shots at some of the messages he was receiving and ignoring on social media. It has been at least three days that people and constituents have been asking online if Bryant indeed in the nephew of Roy Bryant. Governor Bryant is silent on the issue.

Finding a concrete answer was not easy and that in itself made me very suspect. In today’s world, it is very rare to not be able to find information on the internet unless someone important doesn’t want it found. No matter where I looked the only thing, I could find out about Governor Phil Bryant’s mother is that Estelle R. Bryant was a homemaker who raised three boys. After two hours of searching for more information about not only Estelle Bryant, but more information about Governor Bryant’s childhood I was almost ready to give up.

What I found was first this Everpedia page. Now Everpedia is generally great information but I know the owner and I have an Everpedia page of my own so I didn’t want to show bias.   I needed an outside source, something else I could give my readers as verification. At the bottom of the Everpedia page were reference links, I followed one in particular and struck gold. In June of last year, a Washington based news station WKYC, reported on a USA Today story about the confederate flag debate in South Carolina. In the article was treasure I was looking for, I found the following statement,

“I’m the cousin of Emmett Till,” said Edelia Carthan, 37. “It was Phil Bryant’s uncle (Roy Bryant) that admitted to murdering Emmett Till. So I’m not surprised by the governor’s reaction to all this because of his family history. It is in his blood.”

This was said in June 2016 and not refuted. Just as Governor Bryant is silent as people are questioning the relationship this week.

If Governor Bryant is the nephew of Roy Bryant then it could make people question some of his practices and policies. Just last year when the article was written, many local residents were in an uproar, demanding that the state flag be altered. Mississippi is the only state that still overtly displays the confederate flag on it. In fact, earlier this month it was reported that a new bill is making its way through the Mississippi House of Congress where schools K-12 would be stripped of state accreditation if they effuse to fly the flag.

This law will affect many Blacks and minorities in the area. As reported by the Mississippi Business Journal “Districts, especially those with majority African-American student bodies, sometimes object to the flag as racist. One example of a district that doesn’t display the flag is the city of Jackson, Mississippi’s second-largest school system.”

Many controversial issues have been swirling around Governor Bryant. In 2013, Governor Bryant made some very bothersome statements regarding America’s educational system. Bryant said that much of America’s educational problems started “when mom got into the workplace.”   In 2012 he signed a bill into law that practically limited women’s rights to get an abortion. The law required doctors who did abortions to have admitting privileges at local hospitals, which they couldn’t because the abortion doctors weren’t local doctors.   In 2016 Governor Bryant signed House Bill 1523, a religious freedom law that gives businesses the right to discriminate against doing business with/for people who live against their religious beliefs. Guess why this is so crazy, it’s been said Governor Bryant’s son Patrick is gay. If Bryant is the relative of Roy Bryant it seems the family penchant for retaliation against what it deems as wrong, continues. In April of 2016, Bryant declared April “Confederate Heritage Month.”

Governor Bryant’s Wikipedia page has been altered at LEAST four times today to include the fact that he is related to Roy and Carolyn Bryant. The revisions have been deleted each time.

In light of all of the questions being asked of Governor Bryant right now, I’ll be watching to see if he responds.