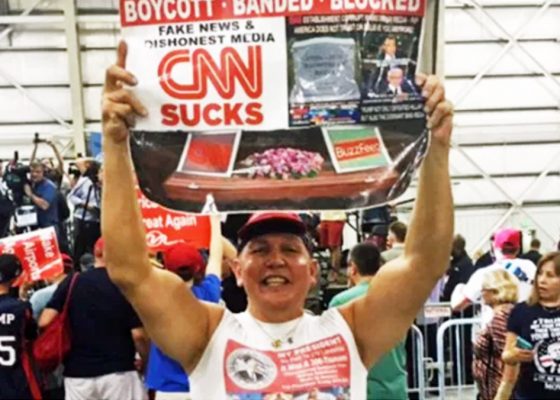 Five of Sayoc’s targets, many of whom Donald Trump has repeatedly attacked verbally, are African American.

Though none of the explosives reached their intended targets, the first one discovered arrived at the home of billionaire philanthropist George Soros in Bedford, New York. The home of former President Bill Clinton and former Secretary of State Hillary Clinton was also targeted along with the home of former Vice President Joe Biden.

Though no one was injured in the attempted attacks and many of the pipe bombs were intercepted by law enforcement in transit, the story of attempted murder and domestic terrorism sent a chill through the political world that was followed by calls to bring down the temperature of political discourse.

The unexpected and potentially violent October surprise hit the news only two weeks before Election Day. Sayoc, who has a criminal record, was caught in Florida after the FBI traced a fingerprint on a pipe bomb he allegedly sent to Rep. Waters.

“I am appreciative of the law enforcement entities who intercepted the package and are investigating this matter. I unequivocally condemn any and all acts of violence and terror,” Waters wrote in a statement on October 24.

The week of fear became a moment of clarity for some in and out of the media as calls for Trump to dial down his rhetoric at political rallies grew louder. Trump has a long history of inflammatory statements that court violence and reaffirm fear of immigrants and minorities. Trump’s very first political speech where he announced he would run for the presidency contained inflammatory demagogic language against Mexican Americans.

Sayoc sent a pipe bomb to CNN headquarters in New York that made its way to the mailroom of the company prompting an evacuation of employees, including their on-air anchors Poppy Harlow and Jim Sciuitto. Trump has been a frequent critic of CNN.

“There is a total and complete lack of understanding at the White House about the seriousness of their continued attacks on the media,” said CNN President Jeff Zucker in a statement on October 24. “The president, and especially the White House press secretary, should understand their words matter. Thus far, they have shown no comprehension of that,” Zucker added.

During the 2016 campaign for the presidency and during his time in the White House, President Trump has been consistently critical of minorities while at the same time failing to call out xenophobia and racism. On October 22, he defined himself as “a nationalist” at a rally in Houston, Texas.

A well-documented uptick in political violence has been documented since Trump took office in 2016.

Lauren Victoria Burke is an independent journalist and writer for NNPA as well as a political analyst and communications strategist. She appears regularly on Roland Martin Unfiltered and can be contacted at LBurke007@gmail.com and on twitter at @LVBurke