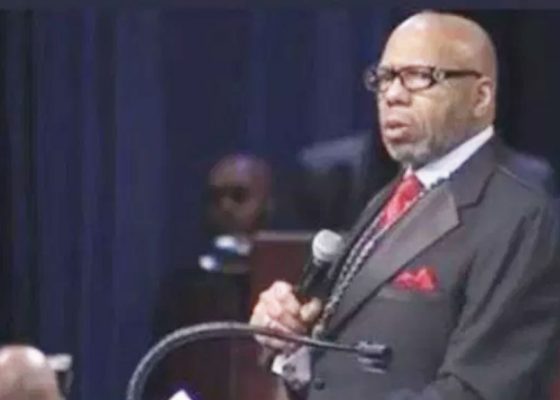 Saying his subject was “Aretha the Queen of Soul,” Rev. Jasper Williams of the Salem Bible Church in Atlanta gave the audience gathered for Aretha Franklin’s funeral a few unexpected memories laced with political commentary.

Though he began simply, referring to the history of soul music and gospel, his talk became political as he Williams appeared towards the end of the ten-hour service. Rev. Williams was one of over three dozen speakers at Franklin’s lengthy Detroit home going ceremony.

“It amazes me how it is that when the police kills one of us, we’re ready to protest march, destroy innocent property,” he said. “We’re ready to loot, steal whatever we want. …But when we kill 100 of us, nobody says anything. Nobody does anything,” he went on.

“There was a time when we as a race had a thriving economy. I remember we had our own little grocery stores. We had our own little hotels. They weren’t big and fancy, but they were ours. As bad as the days as Jim Crow and segregation were … it forced us to each other instead of forcing us on each other. We quickly come to realize that as a people, all we really have is one another,” Rev. Williams said during his 40-minute eulogy to Franklin.

Social media quickly blew up after Rev. Williams spoke in response. Legendary singer Stevie Wonder proclaimed the phrase “black lives do matter,” as he turned in the direction of Rev. Williams after the minister left the stage. Singer Gladys Knight’s performance was also viewed as a moment that brought the ceremony back from Williams’ political speech.

“Black Mothers been raising Black boys for years!! We’re Still are raising proud, accomplished and aware Black man!! I should have known! Rest of this eulogy has been a conservative Black confusion rant!” wrote attorney Barbara Arwine from her twitter feed during the speech.

“Folks, he can’t see, but Stevie Wonder can hear. And he is offering a rebuke to the eulogy. Don’t think for a second, he isn’t! And the folks in the room heard it,” wrote journalist Roland Martin, who attended the service.

“Reverend Jasper Williams plantation style speech at #ArethaFranklinFuneral is a prime example why there is a total disconnect between young Black people and the older Black church crowd. All that cowardly “you’s gots to do better” talk ain’t fooling these kids,” offered anti-racism strategist Tariq Nasheed on twitter.

“Aretha was in her very own special category,” said founder of Arista Records Clive Davis. “Her voice will be impacting others literally for centuries to come,” Davis added.  A second tribute to Franklin and her music is planned at Madison Square Garden this fall.

Lauren Victoria Burke is an independent journalist and writer for NNPA as well as a political analyst and communications strategist. She may be contacted at LBurke007@gmail.com and on twitter at @LVBurke.