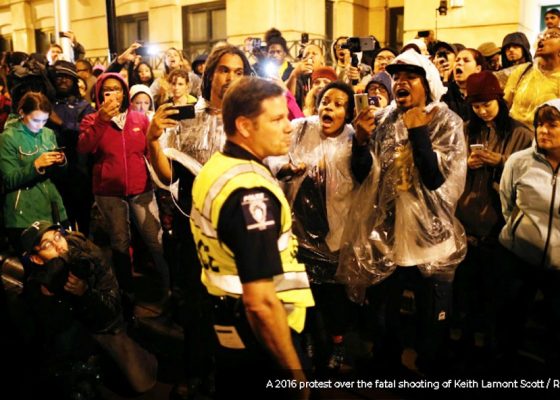 27 percent of people killed by police were Black. In all killings, only 1 percent of the officers involved were charged with a crime.

In 2017, police killed 1,129 people. Officers were only charged with a crime in 1 percent of cases. And of the 1,129 people officers killed, 27 percent were Black — despite Blacks being just 13 percent of the population.

In the majority of the incidents — 631 — officers were responding to non-violent offenses or when no crime had been reported at all. Eighty-seven people killed had been stopped for a traffic violation.

• Most of the unarmed people killed were people of color (48 were Black, 34 were Hispanic, 2 were Native American and 2 were Pacific Islander — 50 were white, and 11 were unknown).

• 92 percent of the deaths were shootings. The rest primarily involved Tasers, physical force, and police vehicles.

• About half of those killed by police had a gun on them at the time — but 1 in 5 of those people were not threatening anyone at the time they were killed.

• During training, police recruits spend 58 hours — almost two and a half days — on firearms training — seven times longer than they dedicate to de-escalation training.

• Of the officers involved in killings that researchers were able to identify (534), at least 43 had previously killed someone, and 12 had multiple prior shootings.

• In the 12 instances officers were charged with a crime for the killing, nine had video evidence.

One argument is that Black people commit violent crime at higher rates than people of other races. According to FBI statistics, 26.9 percent of all people arrested in 2016 were Black. Of those arrested for murder and nonnegligent manslaughter, robbery and aggravated assault, 52.6 percent, 54.5 and 33.3 percent, respectively, were Black.

But this does nothing to explain the instances of racial profiling that exist even when no crime has been committed. In Missouri, for instance, Blacks were twice as likely as whites to be pulled over by police, but whites were statistically more likely to be carrying contraband.

Research supports the idea that the odds may be stacked against Black men specifically even where there’s no crime. A study published last year found that Black men are often perceived as being larger and more capable of causing harm than white men who are the same size.

“Racial Bias in Judgments of Physical Size and Formidability: From Size to Threat,” published in the Journal of Personality and Social Psychology in March 2017, concluded that “people have a bias to perceive young Black men as bigger (taller, heavier, more muscular) and more physically threatening (stronger, more capable of harm) than young White men.”

“We found that these estimates were consistently biased. Participants judged the Black men to be larger, stronger and more muscular than the white men, even though they were actually the same size,” said John Paul Wilson, PhD, of Montclair State University, one of the study’s lead authors.

Regarding perceived harm capability, “Participants also believed that the Black men were more capable of causing harm in a hypothetical altercation and, troublingly, that police would be more justified in using force to subdue them, even if the men were unarmed,” Wilson said.

High-profile cases also exhibit stark differences in arrests. When Dylann Roof murdered nine people at the Emanuel African Methodist Episcopal Church in Charleston, S.C., authorities apprehended Roof the following day in an uneventful arrest. Officers described the killer as “polite” and “quiet,” and pictures show what appeared to be a calm situation.

The arrest of Eric Garner was, unlike the arrest of Roof, violent and deadly. In July 2014, Garner was approached by NYPD for selling loose cigarettes. A verbal argument quickly escalated, and Garner was taken down and put in a chokehold. He repeatedly told the officers, “I can’t breathe,” but his pleas were ignored. Garner died from compressions to the neck and chest from being placed in the chokehold. Garner committed a crime very different from Roof’s and was treated very differently by law enforcement.

The police violence report also suggests that police are not using recommended best practices when faced with potentially violent situations.

For instance, 111 of people killed were armed with a vehicle. Of those people, 85 percent were killed because police shot at a moving vehicle. Researchers state:

“Experts, law enforcement groups, and the US Department of Justice recommend that police be banned from shooting at people in moving vehicles. These shootings are particularly ineffective and dangerous, since shooting the driver can make the vehicle an uncontrollable threat to both officers and the public.

“Despite this, most police departments continue to allow officers to shoot people in these situations.”

The data for the police violence report was put together by Mapping Police Violence. Two people involved with the report were DeRay Mckesson, an activist, supporter of Black Lives Matter and former candidate for mayor in Baltimore, and Brittany Packnett, a cofounder of Campaign Zero and a member of former President Barack Obama’s 21st Century Policing Task Force.