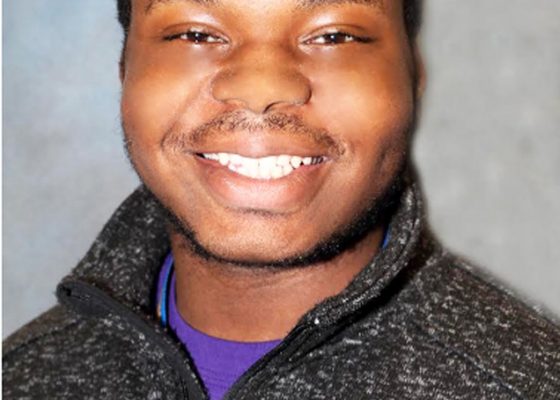 From twin sister valedictorians who have had nearly every class together since kindergarten to a self-driven Latina who was once afraid to speak English and now plans to become a lawyer, San Bernardino City Unified School District’s Class of 2018 has produced many stellar graduates.

There’s Jalen Stevenson, who is making history not because he’s among nine Cajon High School seniors graduating at the top of their class.  Jalen, 17, is the only African-American valedictorian at Cajon High and the District this year.

A native of San Bernardino who attended North Park Elementary and Richardson PREP HI Middle School, Jalen is the first in his family to go to college.  He is headed to UCLA to study psychology, with plans to be a psychiatrist or marriage and family therapist.  Although Jalen never set out to be valedictorian, the achievement has empowered him to be a role model for younger students.

“Humbly speaking, I do feel I am a role model for young African-American males,” said Jalen, who was accepted to nearly every college where he applied.  “I’m a testament to the potential of our city.  The students like me, who graduate from high schools in San Bernardino amid struggles and tribulations, we worked so much harder to earn our diplomas.”

Jalen hopes to return to San Bernardino often while at UCLA to motivate students to work hard for their goals.

UCLA is also where fraternal twins Claire and Caitlin Todd, 18, will go to college this fall, the first time in many years they won’t share the same class schedule.  Claire, who is older by three minutes, will study political science with hopes of holding elected office, while little sister Caitlin will major in biological science.

Since kindergarten, the Pacific High School valedictorians had all but one class together and are now looking forward to carving out their own identities.  Caitlin dreams of designing cutting-edge prosthetics that she hopes will bring movement and freedom to people like her uncle, who uses a prosthetic leg.

“I learned 3D design in ninth grade, and ever since then I’ve been completely fascinated by all the new advancements in science,” said Caitlin, who hasn’t ruled out going to medical school.  “I want to help people who have lost limbs or were born without limbs.”

Claire wants to improve her community by holding elected office at the local level before pursuing a state seat.

For Middle College High School valedictorian Britney Nicolas, debating was the furthest thing from her mind.  As a child growing up in a Spanish-speaking home, Britney overcame a speech impediment after years of therapy.  No longer afraid to speak English, she will be the first in her family to attend college when she tackles business administration at UC Berkeley before heading to law school.

“Although my parents never read a book to me or helped me with my schoolwork, they’re very proud of me,” said Britney, the oldest of five children. “Without my dad, I wouldn’t know the value of an education.”

Jalen, Claire, Caitlin, and Britney are among more than 3,400 San Bernardino City Unified School District students who will receive their high school diplomas or GED certification this year.