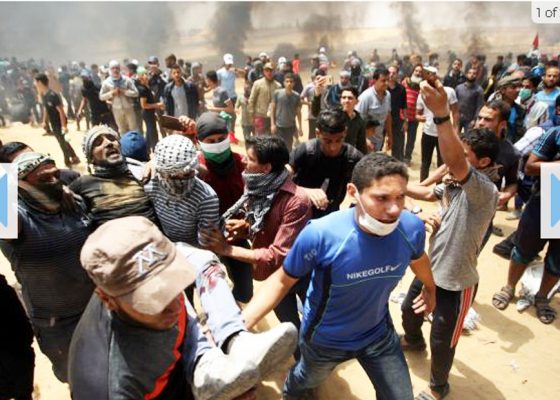 By Ed Adamczyk and Sara Shayanian

May 14 (UPI) — Dozens of people were killed in violence in Gaza Monday ahead of the controversial opening of the new U.S. Embassy in Jerusalem.

Ceremonies marking the embassy’s move from the official capital in Tel Aviv were intended to be festive and celebratory, but authorities are preparing for demonstrations that could turn into fighting.

An interim embassy began operating at the existing U.S. consulate building Monday. The doors opened at 4 p.m., during in a 90-minute ceremony led by U.S. Ambassador to Israel David Friedman.

President Donald Trump delivered a message via video in which he called the embassy move “a long time [in] coming.” He referred to Jerusalem as capital “a reality,” adding that the United States remains “fully committed to faciliating a lasting agreement” between Israelis and Palestinians.. Hundreds attended the ceremony, which was livestreamed on the embassy’s Facebook page.

Ivanka Trump formally opened the embassy with a short statement. Kushner and Israeli Prime Minister Benjamin Netanyahu were among the speakers at the ceremony..

Protests at the Gaza-Israel border Monday coincided with Nakba Day, the Palestinians’ “day of catastrophe” — a reference to Israel’s 1948 founding and Palestinians’ expulsion from their homes in Israel.

At least 52 Palestinians were killed Monday in protests against the embassy opening, including five children under the age of 18. Almost 2000 were injured, over 900 with live ammunition.

“A shameless violation of international law, in some instances constituting war crimes,” Amnesty International said on Twitter. “The Israeli authorities show no signs they intend to rein in excessive force.”

The Israeli army said 10,000 “violent rioters” are participating in the Gaza protest.

Weekly demonstrations at the border for the past seven weeks, which led to more than 50 deaths and over 9,000 injuries, were promoted as a buildup to Monday’s event. A wave of hundreds of thousands of demonstrators is predicted, NBC News reported.

While Israel lauds the transfer of the embassy, announced by President Donald Trump last year, it’s been roundly condemned by many Arab countries.

Tens of thousands of Zionists, Israel’s far right-wing, participated in the Flag March Sunday — the annual procession that marks Jerusalem Day, the end of the 1967 war and the merger of East and West Jerusalem. Fighting broke out along the route to the Temple Mount, which passes through the city’s Muslim Quarter.

Several Palestinians were arrested, as were six Jewish marchers who sang songs police later described as incitement. Most vendors in the Muslim Quarter kept their shops open, despite warnings that police would be unable to protect them if the Flag March turned violent.

The two sides were separated by police at the Temple Mount, a sacred site to Jews, Muslims and Christians, and several Jewish marchers were removed for breaking the rules of conduct, Ynet News reported.

The move of the U.S. Embassy is seen in Israel as a transformative event breaking decades of U.S. neutrality on Israeli-Palestinian relations. Palestinians regard East Jerusalem as Palestine’s capital, should it ever become a sovereign state, and interpret the U.S. Embassy move as Washington taking sides with Israel.

Israel effectively annexed East Jerusalem after the 1967 war, although no country recognized the takeover until Trump’s declaration of the embassy move.