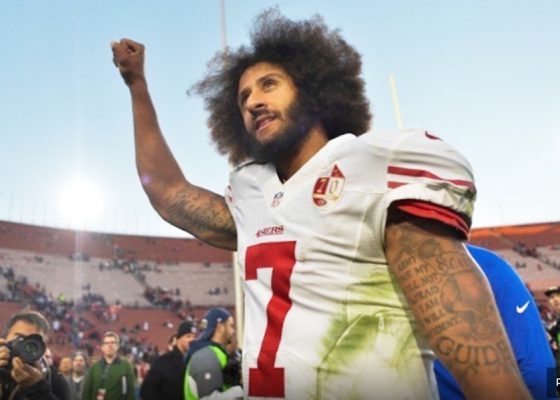 “In truth, this is an award that I share with all of the countless people throughout the world combating the human rights violations of police officers, and their uses of oppressive and excessive force,” Kaepernick said.

The athlete received the Amnesty International Ambassador of Conscience Award on Saturday. According to the organization’s website, the prestigious honor “recognizes remarkable individuals and groups who have promoted and enhanced the cause of human rights by acting on their conscience, confronting injustice and using their talents to inspire others.”

When he accepted his award Kaepernick addressed the very issue he has most publicly acted on.

“Racialized oppression and dehumanization is woven into the very fabric of our nation — the effects of which can be seen in the lawful lynching of Black and brown people by the police, and the mass incarceration of Black and brown lives in the prison industrial complex,” he said.

“How can you stand for the national anthem of a nation that preaches and propagates, ‘freedom and justice for all,’ that is so unjust to so many of the people living there?” he questioned.

Kaepernick filed a grievance late last year alleging that the NFL blackballed him after he started taking a knee during the National Anthem. Even when other quarterbacks became injured during the NFL season, no one would bring Kaepernick to their team.

Kaepernick had a lot to lose when he started his protests. And this style of courageous risk-taking in the name of social justice is exactly what made him the award’s recipient.

“Just like the Ambassadors of Conscience before him, Colin Kaepernick chooses to speak out and inspire others despite the professional and personal risks,” said Salil Shetty, Amnesty International secretary general. “When high profile people choose to take a stand for human rights, it emboldens many others in their struggles against injustice. Colin Kaepernick’s commitment is all the more remarkable because of the alarming levels of vitriol it has attracted from those in power.”

In 2017 singer Alicia Keys received the Ambassador of Conscience Award for her work with refugees and Keep a Child Alive, the non-profit organization she co-founded that helps families affected by HIV in India and Africa. That same year, the award also recognized the Indigenous rights activists in Canada. Nelson Mandela received the honor in 2009 for his lifetime of activism.

Despite any possible collusion at the hands of the NFL, Kaepernick has been keeping himself busy. He has donated over $1 million to philanthropic causes. And in addition to this award over the weekend, in December he received Sports Illustrated’s Muhammad Ali Legacy Award.