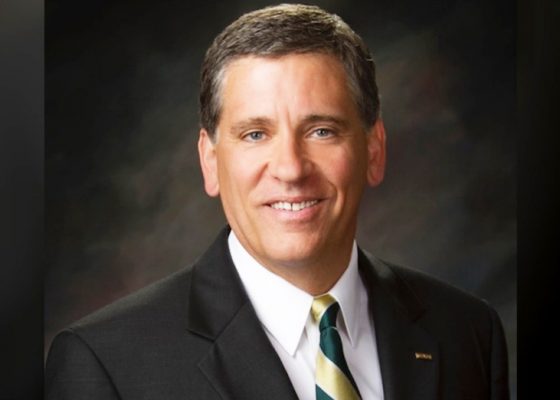 The university president again says racism is out of his hands

Leaders of Lambda Chi Alpha fraternity at California Polytechnic State University in San Luis Obispo have resigned after racially charged photos, including one with a student in blackface, appeared on social media. But the one sporting blackface, identified by The Tribune as Kyler Watkins, may not face disciplinary action from the school, according to Cal Poly President Jeffrey Armstrong.

“That’s very, very likely protected by free speech, and freedom of expression,” Armstrong told The Tribune. “If a student walks around on campus with their face painted black, they can do that.

“Based on the facts we have, what we know now, we would not expel that student.”

In the photos online, brothers of the fraternity were wearing bandanas, baggy jeans, basketball jerseys and other articles of clothing appearing to perpetuate gang stereotypes. Some appeared to be using hand gestures meant to be gang symbols. The photos were taken as the university was holding a multicultural-themed weekend, during which potential students are given a chance to see the university.

The group photo was posted to Instagram and has since been taken down. The caption read, “She want a gangster not a pretty boy.”

With the racist caucasity of the members of Cal Poly’s Lambda Chi Alpha, to the insensitivity from the  president of Cal Poly, responsibility needs to be taken for these actions!

Armstrong called what the fraternity did “awful” but said his “personal feelings” do not trump “an individual’s constitutional right.” He did not say whether or not the fraternity’s local chapter will be shut down but indicated it would remain.

“Will they return? I don’t know,” he said to The Tribune. “Maybe it’s a totally new Lambda Chi that comes back. I don’t know. But they are not guaranteed to come back. We still have the ability to say, ‘No matter what you do, you aren’t coming back.’ But I don’t think it’s wise for us to do that right now.”

According to the fraternity, Watkins’ face was painted black because the brothers were doing an activity in which they were members of different colored teams, and he was on the black team. In the photo, a student next to Watkins does not have his face painted. And none of the students in the group photo have their faces painted, either.

Since the photos were circulated incidents of vandalism have occurred at the fraternity house, which now has a security guard posted outside.

Armstrong does not believe the incident — or others — signal an embedded issue of racism at the university.

“I don’t believe we have a culture that is racist,” he told The Tribune. “I believe we have had some incidents that are awful and we are working very hard to get at the root cause and help people understand.”

Naba Ahmed is editor-in-chief of Mustang News, the university’s newspaper. She penned an op-ed titled “Dear President Armstrong, you have failed.” She cited several racially charged incidents in recent years that took place at the school.

This past January flyers circulated around campus saying that white people are five times more likely to be victims of crimes committed by Black people than Blacks targeted by whites. In 2017, a student was passing out neo-Nazi and white power flyers on campus. In 2016 an annual “Free Speech Wall” event put together by the Cal Poly College Republicans ended with racist, sexist, anti-Islamic and transphobic messages.

Ahmed, a Muslim woman, pointed to Armstrong’s missteps in the past as part of a pattern.

“The university has allowed Milo Yiannopoulos to come to campus and a wall full of hate speech to be erected under the guise of free speech,” Ahmed wrote. “Every time there has been hate speech on campus, you have said your hands are tied and you can’t do anything.

“On top of that, Cal Poly has the highest percentage of white students of any California higher learning public institution and has been named one of the seven worst institutions for Latinx student success.

“Instead of implementing real change, Armstrong, you would rather pile on more student fees to put on a facade to increase diversity.”

Ahmed also cited a 2012 report from the Western Association of Schools and Colleges (WASC), which said the school risks losing its accreditation as “there is concern that the issue of diversity as related to the campus climate has been allowed to exist for a long time.” The report called on the school to “quickly and aggressively address these negative effects and actively increase the diversity of student, staff, and faculty as part of its responsibility to serve the citizens of California.”