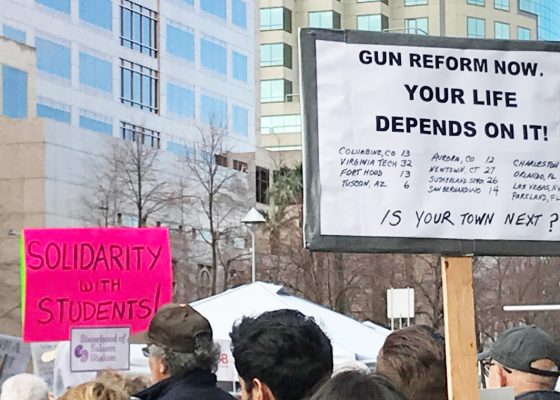 Sacramento, Calif. – Protesters of all backgrounds converged on the Sacramento headquarters of the National Rifle Association, as a culminating event to cap off regional demonstrations against gun violence. The protests were in response to the recent school shooting at Marjory Stoneman Douglas High School in Parkland, Florida that took the lives of 17 individuals.

“Students of color have been wrongly associated with violence and aggression,” said Gray. “And yet we need to consider the demographics of the school shooter because we also need to pay attention to what is happening to white adolescent boys who have access to guns.”

Her speech at the rally visibly touched many mothers in the audience.

Hiram Johnson High School in Sacramento Unified School District participated in the walkout by allowing students to use the walkout “as an opportunity to be given a voice; to empower the students,” according to Barbara Tigert, who teaches English at the high school.

Presenters were mindful to tell youth protestors that once the allotted 17-minute protest time given by school districts had passed, that they  were expected to return to their schools if they had opted to participate the walk out.

“We need to broaden the people who are active on this issue because gun violence effects all communities, but especially communities of color,” said Gonzales who serves a government affairs director for the National Association of  Social Workers and is the co-chair of the Brady Campaign to Prevent Gun Violence.

“Hollywood and our culture for too long have romanticized violence and the use of guns. It must stop but it will only happen if consumers reject this form of ‘entertainment.”

All speakers encouraged the audience members to get involved with the political process any way can from calling, emailing, tweeting, and writing members of Congress, Senators, and/or State Representatives.

As of press time, the National Rifle Association has not returned requests for comment.