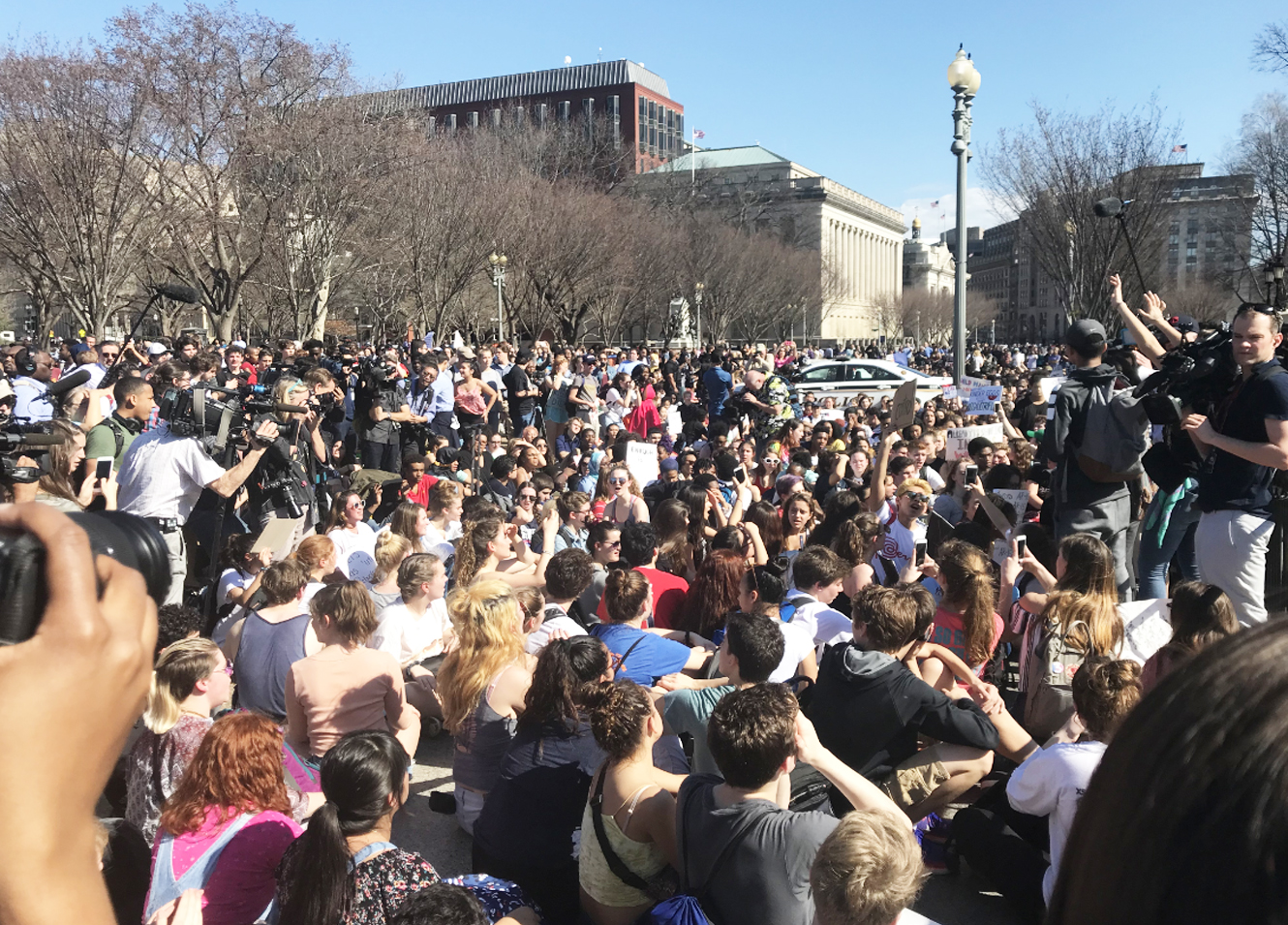 Tens of thousands of students across the country — in Florida, Illinois, Texas and the nation’s capital — left school Wednesday to urge lawmakers to find solutions to the mas murders that take place almost routinely at public schools. So far, there have been 18 in 2018. Photos by Amiyah King, HUNS

High School students, from left, Sally Egan, Emma McMillian and Avery Brooks hold up the signs they made as part of a nationwide student walk-out to urge legislators in Washington and in states across the nation to institute tighter gun control laws following the latest school shooting. Photo by Amiyah King, HUNS

WASHINGTON—Tens of thousands of high school students across America were marked with an unexcused absence Wednesday, but everyone knew where they were.

In the Washington area, high school students from DC. Public Schools and from public schools in Maryland marched to the Capitol and then to the White House to demand Congress and the president institute gun control legislation that will keep them safe. The march was organized by students from Richard Montgomery High School in Rockville, Md., and Bethesda-Chevy Chase in Montgomery County, Md., in response to the recent shooting in Parkland, Fla.

It was exactly one week ago Wednesday that 19-year-olf Nikolas Cruz opened fire at Stoneman Douglas High School, killing 17 students and wounding dozens more. Cruz, who had been expelled from the school, was charged with 17 accounts of murder of his classmates, teachers and other school officials.  The shooting was the 18th school shooting in the first two months of this year.

Student survivors at the school have launched a nationwide effort to focus attention on gun control in the wake of the shooting.  Other student demonstrations were reported in Illinois, Florida and Texas.

Washington-area students walked out of their classes today at 9:30 a.m. where they followed each other in procession to Union Station where they joined other protestors who took public transportation from Maryland.  From Union Station, thousands of high schoolers marched to Capitol Hill and later participated in a sit-in demonstration outside the White House.

During the sit-in, students gathered in a semi-circle to hear leaders talk about why they were there.

“No more thoughts and prayers,” said student leader Daniel Shepard.  “If this isn’t the last school shooting, we’ll be out here every opportunity we get.”

In response to the speakers, students shouted, “No more silence and gun violence.  Hey, hey.  Ho, ho. the NRA (National Rifle Association) has got to go.”

Teachers and parents were mixed with the crowd of demonstrations either as chaperones or to provide support for their children and their cause.

“I don’t think they need my help,” said Mandi Mader, mother of three who attended the march in support of her children. “I’m just one more body to represent them here.”

Most students said they were advocating for the implementation of gun control laws in Congress as a solution to the crisis.

Talia Fleischer, a sophomore at her high school, said she hopes to see “a sign that something will be done in Congress.”

“Countries like Australia and England have great gun control laws, and they have no mass shootings,” she said.

In 1996, Australia passed the National Firearms Agreement after a mass shooting in Tasmania in April of that year. In that incident, a 28-year-old man, armed with a semi-automatic rifle, shot and killed 35 people, and injured 18 others, in what was known as the Port Arthur Massacre.

Paul DeVries and his daughter, Brechje DeVries, were among the demonstrators.  Brechje DeVries, 17, moved from the Netherlands to the United States a year ago and attends high school in Maine.  Her father was in the U.S. for one of her sports activities in the Washington, and the two decided to attend the demonstration.

Brechje DeVries said mass shootings are almost unheard of in her country.  Her country has experienced only one mass shooting in its history. She said she is stunned and frightened by their frequency in the United States.

“It’s scary,” she said. “There have been threats at schools near me, so it definitely comes close to me.”

Her father said he is worried for his daughter.

“I feel the frustration,” he said.  “There are a lot of teenagers here. and I think that speaks for itself.”

Joseph Byler, a senior at his school, said the Florida shooting is what sparked him to attend.

“[I hope] the inability of Congress to pass gun control policies disappears,” Byler said. “I hope after today, we get universal background checks on gun purchases.”

Since the shooting in Florida, President Trump has flirted with the idea of proposing restrictions to purchasing guns, from more intense background checks for gun purchasers to the elimination of bump stocks, the tool the Las Vegas shooter used to kill more than 50 people.

Via Twitter, Trump said, “Whether we are Republican or Democrat, we must now focus on strengthening Background Checks!”

Trump, who received millions of dollars in support from the National Rifle Association in his run for presidency, until now has consistently backed away from any restrictions on guns.

“ But not right now,” Vasquez said. “Hopefully our kids dying will help the government see that they need to do something.”

Some school districts were not supportive of their students’ activism.  In the Houston area,  Needville Independent School District officials said Tuesday they would suspend students if they walked out of class or otherwise disrupted school in protest.

“Needville ISD will not allow a student demonstration during school hours for any type of protest or awareness!!” Superintendent Curtis Rhodes wrote in a note sent to parents. “Should students choose to do so, they will be suspended from school for 3 days and face all the consequences that come along with an out of school suspension.”