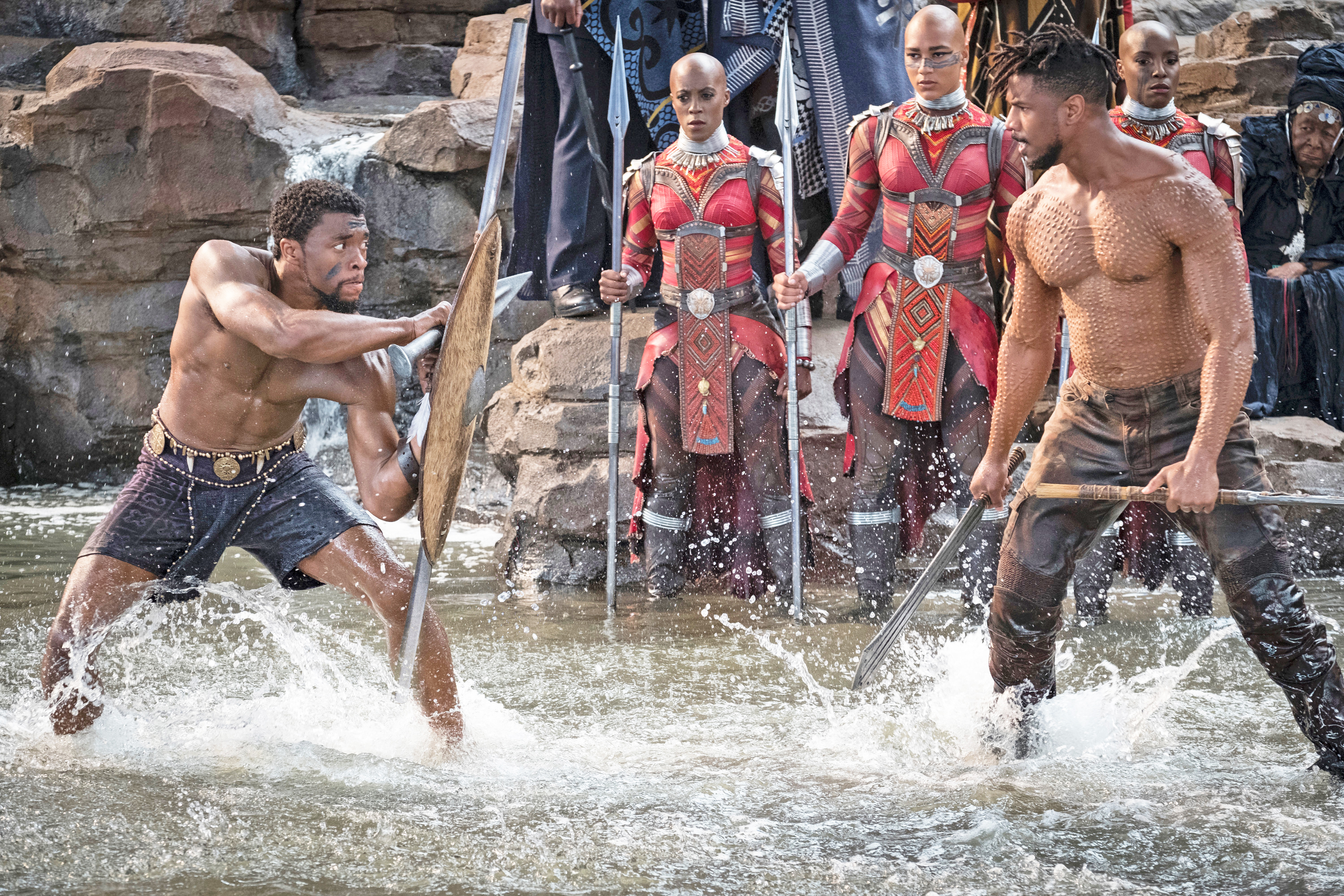 Fans, who bought a record-setting number of advance tickets, weren’t the only ones anticipating the Feb. 16 opening of “Black Panther,” Marvel’s historic first black superhero film.

“I’ve been waiting a long time. I was just so, so excited because this was a movie [where] we all felt a lot of ownership, that we thoroughly enjoyed making,” said Oscar winner Lupita Nyong’o during the film’s January 30 press conference at the Montage Beverly Hills the morning after its glitzy purple carpet premiere. Nyong’o plays Nakia, T’Challa/Black Panther’s love interest.

Although T’Challa/Black Panther, whose superpowers include speed, strength, night vision, claws and more aided by his country’s powerful metal, Vibranium, was first introduced in the “Fantastic Four” comic book series in 1966, months before the founding of the iconic freedom-fighting Black Panther Party, “Black Panther” is the character’s first-ever live action film. Reportedly Jack Kirby, who created T’Challa/Black Panther with Stan Lee, took the name from the all-black U.S. Army 761st Tank Battalion of World War II dubbed “the Black Panthers.” Chadwick Boseman, well-known for his roles as such real-life heroes as Jackie Robinson and James Brown, is the first to ever play him on film, appearing in 2016’s “Captain America: Civil War” to great enthusiasm. He returns in “Avengers: Infinity War” May 4.

“Black Panther” follows T’Challa/Black Panther’s journey, in the aftermath of his father’s death, to lead his technologically advanced nation, Wakanda, which the world believes is impoverished. Featuring black actors from the United States, England and various parts of Africa, “Black Panther” is the first Marvel film set in a black-ruled nation. As such, the film challenges the negative stereotypes in which the world typically views African nations. It also raises larger questions about what a successful never colonialized African country might look like and what role it would play in today’s global landscape.

Jordan, who plays the main villain Erik Killmonger that challenges T’Challa/Black Panther’s ascension as Wakanda’s king, said he only truly grasped the film’s importance after seeing it for the first time at the premiere.

“I couldn’t describe that feeling before actually sitting down and watching that film and seeing yourself on screen, not just me personally, but people that look like me in power and having those socially relevant themes but in a movie that you want to sit down and watch and enjoy,” Jordan said.

As someone from both the United States and Zimbabwe, Danai Gurira, who plays Okoye, leader of the female warriors known as the Dora Milaje who protect the king, had an even more positive response to the fictional Wakanda and its very real continent. Gurira shared that she appreciated the departure from the usual depictions of African countries as impoverished.

“You see the power and potential of where you’re from, but you see how skewed it’s viewed by the world and how misrepresented it is and how distorted it is or besieged by the world so often,” she said. “[“Black Panther” is] kind of a salve to those wounds to see this world brought to life this way and to see all the potential and power of all the different African culturalisms and aspects of our being that’s actually celebrated,” she said.

“Black Panther” is also noteworthy for its elevation of black women in the superhero genre, be they strong like Gurira’s Okoye, humanitarian like Nyong’o’s Nakia, royal like Angela Bassett’s Ramonda or STEM geniuses like Letitia Wright’s Shuri who is T’Challa/Black Panther’s sister. That elevation was also present behind the scenes through the work of production designer Hannah Beachler, Oscar-nominated costume designer Ruth E. Carter and hair department head Camille Friend.

Boseman attributes that gender balance to the vision that is Wakanda. “The idea of the next generation being smarter, being better than you, is a concept that they would have evolved to,” said Boseman. “So even though she’s reared in the same generation, she’s my younger sister, she benefits from whatever I have. So you want your sons and daughters to be better than you were. So that concept is a Wakandan concept.”

Coogler, previously known for his independent social justice film “Fruitvale Station” and the latest installment of the Rocky franchise, “Creed,” both starring Jordan, said he was cautious not to tamper too much with the “Black Panther” spirit so well established by the comic books in the script he wrote with Joe Robert Cole.

“You can go through our film and see something in there probably from every writer that has touched T’Challa’s character and the “Black Panther” comics, from Stan Lee and Jack Kirby’s initial runs to Don McGregor to Christopher Priest, Reginald Hudlin, Jonathan Hickman and Ta-Nehisi Coates,” he said, naming most of the franchise writers. “The character has got a long history and such rich stuff to mine and each writer left their own mark.”

When the film’s radicalism was singled out, Feige reminded those in the room that “Black Panther” was born radical. “Stan Lee and Jack Kirby and the whole Marvel bullpen created Wakanda and created T’Challa and created Black Panther and made him a smarter, more accomplished character than any of the other white characters in the mid-1960s,” he said.

That integrity, Feige continued, guided this Marvel team. “If they had the guts to do that in the mid-1960s,” he said, “the least we [could] do is live up to that and allow this story to be told the way it needed to be told and not shy away from things that the Marvel founders didn’t shy away from in the height of the Civil Rights era.