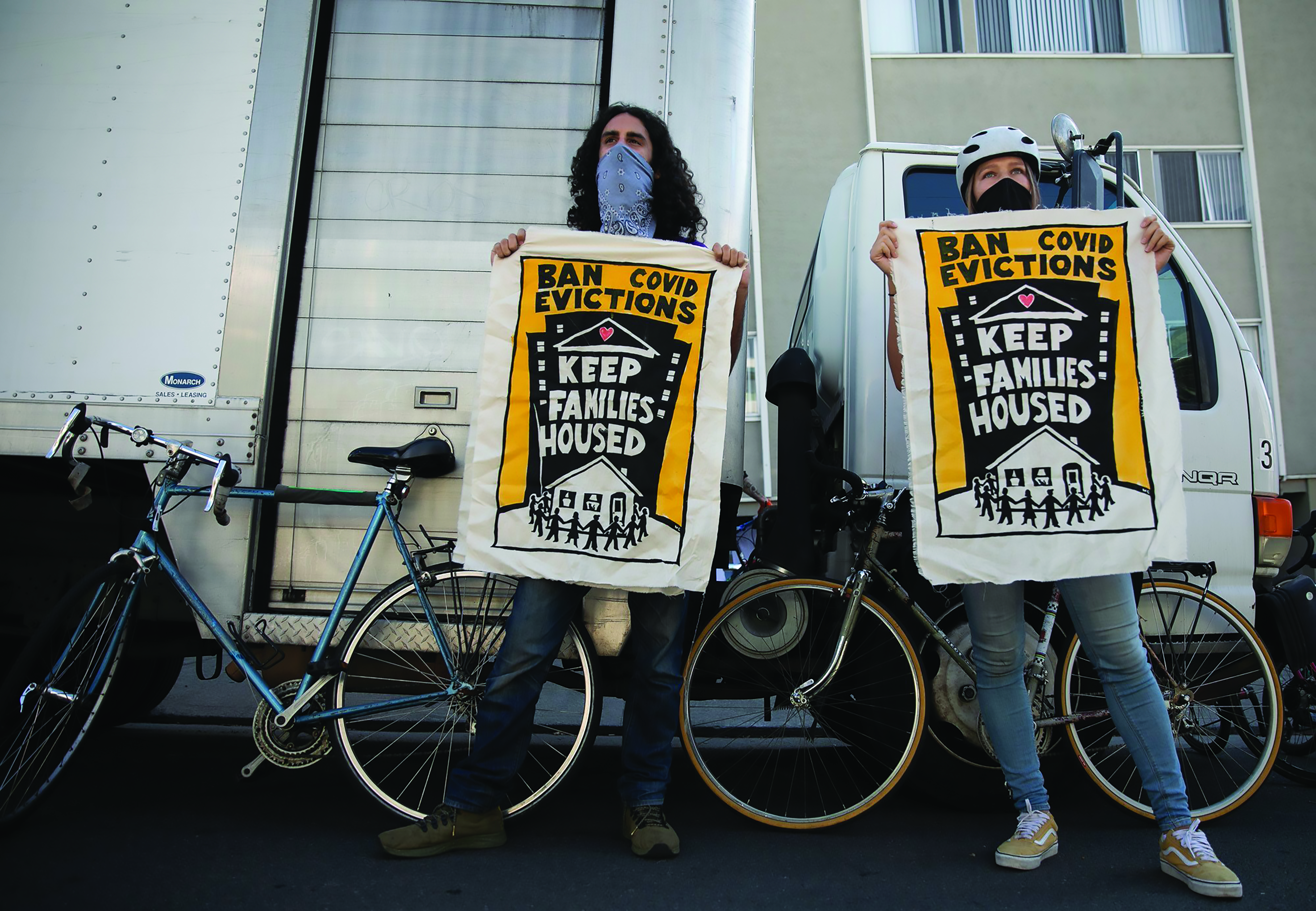 Under a legislative agreement, California would extend its eviction moratorium to the end of June. Landlords would get an incentive to forgive back rent using an extra $2.6 billion from federal relief.

Legislators are prepared to extend California’s eviction moratorium to the end of June while offering landlords an incentive to forgive back rent using an extra $2.6 billion the state received from the latest federal relief bill.

Legislators and groups representing landlords and tenants worked on a deal over the weekend, and the bill, SB 91, was introduced this morning, which means lawmakers can vote on it Thursday morning.

“We have a deal,” Gov. Gavin Newsom said at a press conference, noting that the deal also extended to financial assistance for unpaid utilities.

“The whole idea is to leverage the (federal) dollars to pay back back rent and get about 20% (forgiven),” Newsom said. “Those tenants are allowed to at least get their lives a little more stable.”

Demonstrators hold up a banner in front of an apartment building in the Adams Point neighborhood of Oakland to protest rent payment and evictions during the coronavirus pandemic on Dec. 5, 2020. Photo by Anne Wernikoff for CalMatters

Despite a federal eviction moratorium that runs until the end of March, legislators were working to preserve the complicated and delicate framework of California’s deal, which allowed those who have paid 25% of their rent during the pandemic to avoid eviction and owe the back rent as civil debt.

California’s original eviction moratorium ends Jan. 31, and a new deal would need to be in place before then.

Tenant groups told CalMatters during negotiations over the extension that they had been sidelined, and raised those concerns again today. Their chief objection to the deal is the provision allowing landlords to decline the federal rental relief.

“If federal tenant protection policies are mandatory because of the decades of evidence that landlords discriminate, such as fair housing, why would we allow landlords to opt out of a tenant protection program where the cost to society and human life could be catastrophic,” said Alliance of Californians for Community Empowerment executive director Christina Livingston in a statement.

Assemblymember David Chiu, a San Francisco Democrat who wrote the original eviction moratorium that took effect in September, called the proposal “necessary but far from perfect.”

“The power imbalance between tenants and landlords is troubling as the amount of rental assistance a tenant receives is determined solely by the cooperation of their landlord,” Chiu said in a statement Monday morning. “I expect there will be a need to revisit this legislation to address gaps and provide relief to additional tenants.”

The proposed moratorium extension deal also addressed one of the California Apartment Association’s major demands: A unified statewide eviction moratorium that preempts any local efforts to establish a longer moratorium.

The association’s chief lobbyist, Debra Carlton, said that “while the bill doesn’t contain everything we asked for,” the group is satisfied that the deal includes back rent owed to landlords.

“Without this money, many landlords are at risk of losing their rental units,” Carlton said in a statement. “It is imperative that the state release that money quickly.

Using $2.6 billion in federal relief as rental subsidies, the proposal would pay landlords 80% of unpaid back rent incurred between April 2020 and March 2021 if landlords agree to forgive the remaining 20% in back rent and agree not to pursue evictions.

Should landlords not agree to accept the rental relief dollars, the deal instructs courts to reduce damages owed the landlord, assuming the tenant met the eligibility requirements.

Per federal rules, rental assistance is limited to those who make up to 80% of the Area Median Income (AMI). The outline obtained Monday suggests that priority for rental relief will go to those earning less than 50% AMI. Area Median Income for a four-person household in Los Angeles County is $77,300. Eighty percent of that is $61,840.