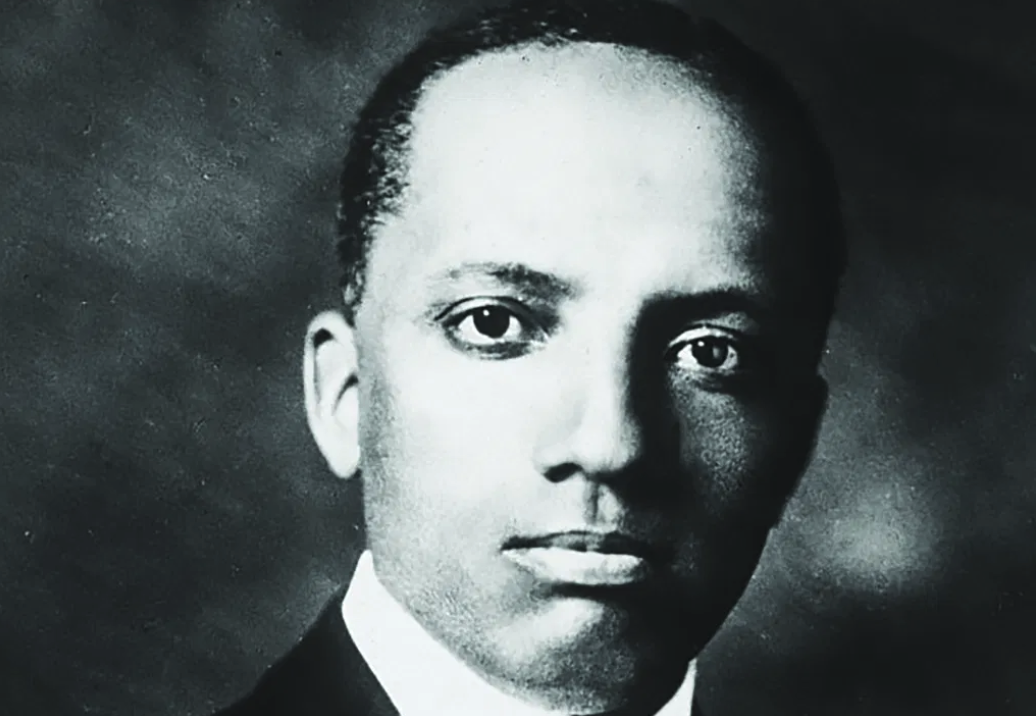 The Man who inspired the creation of Black History Month

Written by Deborah McDowell, Director of the Carter G. Woodson Institute for African-American and African Studies, and Alice Griffin Professor of English, College and Graduate School of Arts & Sciences

Yesterday began the official celebration of Black History Month, founded by the Woodson Institute’s namesake, Carter Godwin Woodson.  To kick off the 28-day celebration,   yesterday’s Google Doodle celebrates Woodson, known to many as the “Father of Black History.” When Woodson founded Negro History Week in 1926, the nation was inching toward the “winter” that was the Great Depression, but in calling for a celebration to be observed annually in the week between the birthdays of Abraham Lincoln and Frederick Douglass, Woodson-ever attuned to the eloquence of the symbolic-expressed his lifelong faith in and commitment to the “emancipatory” promises of African-American history.

Negro History Week eventually expanded to Black History Month in 1976 (the year of the bicentennial) and is now observed across the nation in rural hamlets, small towns, and urban capitals alike and, to this day, Carter G. Woodson remains revered as “The Father of African-American History.”  In agitating for the creation of a national celebration of the heritages of peoples of African descent, Woodson sought to educate the nation about the intimate linkages between the cultures and societies of Africa and those established by persons of African descent in the “New World.”  But more, he sought to remold the attitude of the popular mind by establishing that the Negro was a “factor in world culture,” not the distorted creature and creation of social science.  At the start of this Black History Month allow me to acquaint some and reacquaint others with the man, as well as the work of the Institute that bears his name.

Woodson was born in 1875 in New Canton, Virginia (Buckingham Country), a scant ten years after the Civil War and roughly two years before the Compromise of 1877, which ended Reconstruction.  The son of former slaves, he worked in the mines and quarries until the age of twenty, obtaining his education during the four month term then customary for black pupils.  He graduated from high school at age twenty-two and immediately enrolled at Berea College in Kentucky, graduating with honors.  After working in the Philippines as a school supervisor, Woodson returned to the United States in order to attend the University of Chicago, from which he received both a BA (in 1907) and MA (1908).

Woodson then journeyed abroad to do graduate work in history at the Sorbonne.  He completed his graduate training at Harvard, receiving a doctorate in History in 1912, only the second African-American to earn a Ph.D. in history at Harvard, the first being the eminent scholar, W. E. B. DuBois.  Woodson went on to found the Association for the Study of Negro Life and History (ASALH), a learned society, in 1915, and the Journal of Negro History (now The Journal of African-American History) the very next year, its first issue appearing January 1, 1916.  During his thirty-five-year tenure as editor of this quarterly, it became the single most influential outlet for pioneering work in African-American and African Studies.

For Woodson, African-American history was more than a field of scholarly endeavor and significance; it was, he insisted, a “Cause” that would spare “the Negro . . . the awful fate of becoming a negligible factor in the thought of the world.”   Expansive in reach, Woodson’s “cause” encompassed not just a comprehensive program of scholarly research and publication; it also included a program of public education in the fullest meaning of the term.  Woodson founded The Negro History Bulletin, a journal targeted at primary and secondary school teachers, established Negro History Clubs, and a Research Department which worked with teachers to plan courses and curricula in this new field of African-American history. On the occasion of the 25th Anniversary of the Association for the Study of Negro Life and History, Woodson provided an account of the organization and its multi-faceted agenda:

At present the Association for the Study of Negro Life and History publishes two magazines, researches in Negro history, directs studies in clubs and schools, promotes the home study of the Negro by mail; produces texts on the Negro for schools and colleges, collects and preserves the valuable documents of Negro history, supplies libraries with special collections of rare books on the Negro, and educates promising and enterprising young men for service in historical research.

A “Cause”?  For sure.  Later scholars would suggest that such single-minded dedication to popularizing history left Woodson little time to uphold the exacting standards of historiography in his own work, but he ensured that such standards were never sacrificed in the scholarship he published in The Journal of Negro History, which ranked with the most distinguished research periodicals in the country.  But even as Woodson published and promoted the work of many academic historians, he found the academy stifling.  Although he taught briefly at Howard University, he remained a fiercely independent and unaffiliated scholar for the duration of his career.  He broke early on with the academic tradition that tethers the scholar to one specialized field, and was, in this respect, an early proponent and practitioner of what we now call Interdisciplinary Studies.  He edited a variety of source materials:  Negro Orators and their Orations, Free Negro Heads of Families in the United States in 1830, and Free Negro Owners of Slaves in the United States in 1830, The Mind of the Negro as Reflected in his Letters Mind of the Negro as Reflected in his Letters, all appearing in 1926; and the Works of Francis Grimke (1942).

Woodson’s monographs likewise spanned a range of subjects and disciplines:  labor and economic history (The Negro Wage Earner and The Negro Professional Man and the Community); religious studies (The History of the Negro Church); collective biography (African Heroes and Heroines); the history of education (The Education of the Negro Prior to 1861) and The Mis-Education of the Negro, a collection of essays and speeches, which first appeared in Black newspapers. Woodson’s best known work, especially among contemporary audiences, The Mis-Education is provocative, at times even sensational in its claims and is perhaps best regarded as a witty homiletic text, particular insights of which retain their relevance now almost seventy-five years later.  Some of its ideas anticipate a range of concepts and conversations that scholars across the disciplines would initiate in the decades to come:  “situated knowledge,” “positionality,” “cultural literacy.”  And in campaigning for the importance of international study in a well-rounded curriculum, Woodson can be seen to be an early proponent of “Global Studies.”  As he put it in The Mis-Education, “The world is not circumscribed by the United States, and the Negro must become a pioneer in making use of a larger portion of the universe.”  Indeed, Woodson’s travels abroad did much to illustrate to him “how people should and should not be taught.”

Traveling to China with a group of missionaries from the U. S. Woodson described one Todd, from North Carolina, who rushed headlong and unthinking into the missionary enterprise.  He “had not been in China five months before he and his wife had been poisoned by their native cook who had become incensed at the way they interfered with the institutions of his people.”  Woodson described a similar phenomenon in the Philippines where U. S. teachers trained at Harvard, Yale, Columbia, and Chicago, failed repeatedly in their efforts to teach Filipino children, all because they did not take into account the alienating materials of instruction they selected.  In teaching music, the Americans began with “Come Shake the Apple tree,” though Filipino children had never seen such a tree.  When they taught “Come shake the Lomoy Tree,” which students had actually done, teachers met with more success, just as they had in teaching reading.  It was pointless to concentrate “On the story of how George Washington always told the truth.”  Teaching Filipino children to read from books based solely on American myths and heroes would never prove successful, he maintained.  Woodson readily complicated these positions by suggesting that no “people should ignore the record of the progress of other races . . . We say, hold on to the real facts of history as they are, but complete such knowledge by studying also the history of races and nations which have been purposely ignored.”

Those who have dismissed Woodson’s commitment to the “cause” of Black History as populist propaganda miss the larger point of Woodson’s multi-faceted enterprise.  Even if one attempts to reduce Woodson’s investment in African-American history to its popularizing objectives, it must still be conceded that Woodson was no less committed to developing the institutional structures that would promote the study of African-American and African history and culture, and provide subsequent generations of scholars the support they needed to carry out their work.  Without such structures, African-American Studies could not claim the lasting and transformative effects on intellectual life.  Woodson also understood that building and maintaining such structures was unimaginable without reliable funding streams.

With mixed success Woodson appealed to philanthropists and philanthropic agencies to support his work.  Some answered that appeal, but when their backing came with strings attached that threatened his professional autonomy, Woodson refused to compromise.  Cutting these ties, he worked to develop alternative funding sources.  In one instance he dispatched to the South a group of young men in training as historians, who traveled from state to state selling books published by Woodson’s Associated Publishers.  Woodson even poured his own salary, speaking fees, and book profits into The Journal of Negro History, and used the profits from the Association for the Study of Negro Life and History, to send African-American scholars-“Woodson’s Boys,” as they were called-to the best graduate schools in the country.  Trained according to the current canons of historical research, these scholars formed the ranks of the first professional African-American historians.  Charles Wesley, one of these scholars, wrote The Collapse of the Confederacy (1937), which influenced the scholarship of the late Armstead Robinson, founder of the Carter G. Woodson Institute.

When Robinson founded the Institute for African-American Studies in 1981, soon thereafter, he petitioned the University to rename the Institute in honor of Carter G. Woodson.  This was entirely fitting, not merely because Woodson was, like Robinson, was a historian. Not because he was a Virginian, but because Woodson had devoted his life and work to designing and maintaining the institutional structures that advanced the study of African-American history, providing subsequent generations of scholars the support they needed to build professional careers that would not have been possible otherwise.  The Institute’s subsequent director, Reginald Butler, as well as the associate and interim directors over the years-William Jackson, Scot French, Cynthia Hoehler-Fatton, and Deborah McDowell-have worked to sustain and advance Carter Woodson’s dynamic approach to the study of black history and culture, approach ambitious in its aims and global in its reach.  The work of our students, faculty members, as well as the pre- and post-doctoral fellows encompasses diverse fields of inquiry and methodologies.” Collectively, they are proudly carrying on the legacy and commitments of our namesake, bringing the study of African American history and culture out of the nation’s shadows and into public light and life.