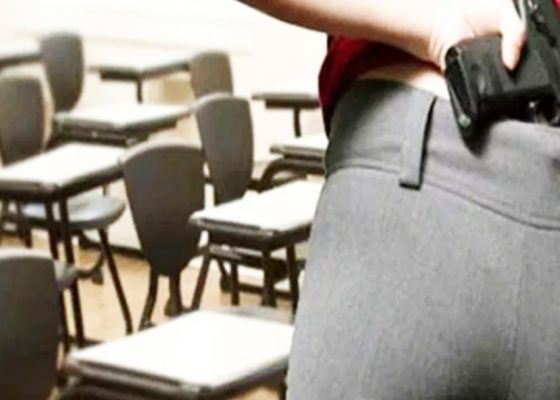 OKLAHOMA CITY – A bill that would allow teachers and other school staff to carry guns without special training advances to the Senate floor.

Right now, school personnel can carry guns concealed on campus if they have the permission of their districts; if they have completed CLEET training and possess a valid armed security guard license or hold a valid reserve peace officer certification. This bill would reduce those requirements to just having a districts permission, and a valid weapons permit.

“We have too many kids right now that are unguarded, unprotected, they’re sitting ducks if somebody walks in,” said Senator David Bullard (R) Durant, who fielded questions from his colleagues about whether arming staff would make schools more dangerous, and who would be responsible should someone get hurt.

“Am I reading this right that they are not liable for any injury that they might inflict?” asked Senator J.J. Dossett (D) Owasso.

Reading from the bill, Bullard replied, “And upon acting in good faith shall be immune from civil and criminal liability. So yes, they would be immune from that.”

Senator Carri Hicks (D) Oklahoma City said, “My biggest concerns are that ultimately this does reduce the amount of training or requirements that we currently have in place.”

The group Moms Demand Action has concerns about reducing the minimum training standards too.

“It’s an 8-hour minimum training. When we were here for the permitless carry debate, they talked over and over about how that training is worthless. If it’s worthless and we’re requiring less that is not a good argument for keeping our kids safe in schools,” said Cacky Poarch with Moms Demand Action.

Don Spencer with the Oklahoma Second Amendment Association said, “It’s like driving a school bus. You don’t just give that to anybody to do. The school board is going to make sure they’ve got people that are qualified to handle and do exactly that.”

Bullard added, “The idea is to give those local school boards the options of how to do that. We talk about local school control all the time. And we are just allowing the to do that to protect their kids at their school. We have too many who are not protected now.”

The bill already passed in the House of Representatives and now heads for the Senate Floor. If it passes there, it goes to the governor.

This article originally appeared in the Oklahoma Eagle.