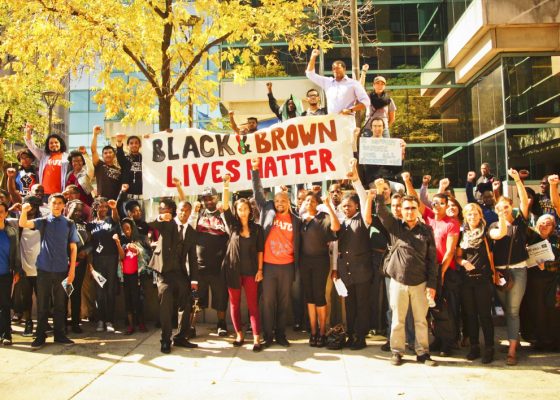 Recently as I was speaking with members of our community and was asked several times about why we rarely see reports of police brutality cases against Hispanics and Latin Americans in the United States. It was a difficult question to answer because there are plenty of studies that have been done on the topic, they just haven’t been reported on by media outlets on a large scale. An intriguing anomaly that sparked my interest when discussing police misconduct towards people of color.

I’ve been a supporter of the Black Lives Matter (BLM) movement since it began. I know why it exists. I understand the pain of the families. I’ve been there. I’ve seen first-hand how police treat people of color. BLM has supported us and they’ve supported white families who were victimized by police brutality as well. To think otherwise means your not paying attention.

But we, as Hispanic and Latin American people, need to dig deeper than just looking at who supports us and who doesn’t in such trying times. One study that caught my attention is the ongoing Fatal Interactions with Police (FIPS) research project. The project includes contributions from public health and biostatistics experts at hospitals and universities, including Saint Louis University, New York University, and Harvard University.

One of the most alarming statistics that stood out to me in the first study was that nearly 60 percent of black women killed by police were unarmed at the time of the interaction. A statistic that increases the odds for unarmed black Americans to be killed by police to an astounding 7 to 1 (more than double the odds found in research to date).

The study was conducted using hierarchical linear models after identifying 1,762 fatal interactions with police that occurred over a 20-month time period and merged them with the nationally representative Law Enforcement Management and Administrative Statistics survey, Uniform Crime Reports data, and census characteristics. The FIPS database includes details of the fatal interactions from May 2013 to January 2015 occurring in jurisdictions across the United States.

The study then estimates the demographic odds of a fatality occurring during an interaction with police based on the location of the interaction and the characteristics of the likely responding law enforcement agency.

“When it comes to police shootings, the color of your neighborhood may matter as much as the color of your skin,” said lead researcher Odis Johnson, associate professor of education and of sociology, both in Arts & Sciences at Washington University. “Our database analysis shows that the racial and economic demographics of the neighborhood you’re in can be a powerful factor in your odds of being killed during an interaction with law enforcement.”

Key findings from the first report include:

In neighborhoods with high levels of income inequality, such as poor areas undergoing gentrification, all males of color face a higher risk of being killed during interactions with police. Hispanic men face an even higher risk than black men in these settings.

Hispanic males were over 2.6 times as likely as others to be killed by officers from agencies with relatively higher percentages of Hispanic officers.

Black males thought to be mentally ill or under the influence of drugs or alcohol are less likely than other black males to be killed during an interaction with police; there is no significant drop in risk for Hispanic males whose mental abilities appear to be compromised.

Taking into consideration all of the social and economic issues that impact poorer communities, as the FIPS study does, the statistics around police brutality are quite different and challenge current narratives and conversations being had in the United States. This is not to take away from the Black Lives Matter (BLM) movement. But it’s time we start talking more about what’s happening to Hispanic/Latin Americans on a much larger scale. We must start fostering movements that speak specifically to and for us.

We need to address these issues as a community, a united front, with all others who are impacted much in the same way. It’s past time.

The second study titled, “Why Neighborhoods Matter in Deaths by Legal Intervention: Examining Fatal Interactions between Police and Men of Color,”addresses the concerns that death by legal intervention is stratified by race and ethnicity, disproportionately impacting boys and men of color, and how deaths are predicated largely on the location in which law enforcement encounters them.

“ Using multi-level statistical methods to analyze data from multiple federal agencies and online databases of police homicides, this study questions whether geospatial and agency characteristics are related to the odds that males of color will have a fatal interaction with police (FIP)”

Some of the most noteworthy findings of the second study are:

Income inequality within the areas in which the FIP occurred is related to increased relative odds that males of color, and Hispanic males more specifically, will be killed by police.

Low levels of racial segregation appeared to dramatically reduce the odds of a FIP for black males while higher levels of segregation increased the odds for Hispanic males.

The FIPS database contains much more than a listing of fatal police interactions. The database also contains a wealth demographic information and law enforcement data that allows deaths to be analyzed in the context of local conditions. Researchers gathered thorough background data on each case to reach these conclusions.

“Hispanic males were over 2.6 times as likely as others to be killed by officers from agencies with relatively higher percentages of Hispanic officers.”

As Hispanics and Latin Americans all over the country increasingly face abuse at the hands of law enforcement, racial profiling, and hate crimes we must begin to acknowledge that this problem is not just a black problem. Police misconduct cases in our communities continue to rise. Much of it from xenophobia and rising concerns about undocumented migrants.

Across the nation, we have seen department after department making local headlines for their mistreatment of Hispanics and Latin Americans. We’re not just talking about undocumented migrants, but permanent legal residents and American born citizens as well. Nearly all of these cases stem from using racial profiling to initiate a stop. A tactic that impacts the black community as well as our own.

I remember when the videos of Alton Sterling and Philando Castile went viral and their names became hashtags and many called out a lack of media attention for the five Latinos who were killed by officers that same week. I also remember how organizations like the National Council of La Raza (now UnidosUs), Voto Latino, and even Black Lives Matter came together to raise awareness of police use-of-force in Latino communities.

As we continue the discussion about the underreporting of Latino/Hispanic police brutality cases, let us continue to remain united in the fight against injustice, equality, and social equity. Because whether we are Black, Brown, Asian, White, or whatever, we should all be entitled to all the same freedoms and protections.

“In American history, racial conflict has largely played out in black and white. But the history is much more complicated, [leaving] out Native Americans, as well as Asians and Hispanics,” said Aaron Fountain, historian of youth activism at Indiana University. “Americans don’t see any kind of historical context when Latinos are victims of state violence, despite the fact that there is historical context there.”