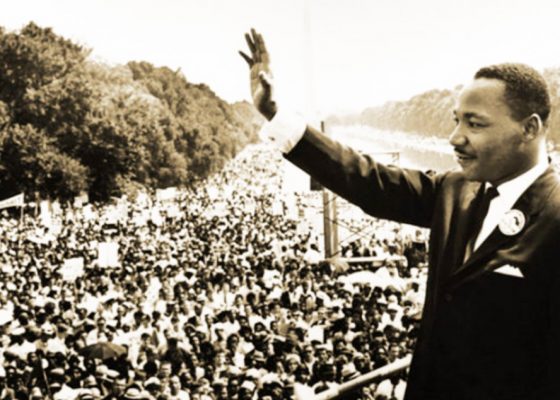 The “I Have a Dream” speech, delivered by Martin Luther King, Jr. before a crowd of some 250,000 people at the 1963 March on Washington, remains one of the most famous speeches in history. Weaving in references to the country’s Founding Fathers and the Bible, King used universal themes to depict the struggles of African Americans, before closing with an improvised riff on his dreams of equality. The eloquent speech was immediately recognized as a highlight of the successful protest, and has endured as one of the signature moments of the civil rights movement.

A young Baptist minister, Martin Luther King, Jr. rose to prominence in the 1950s as a spiritual leader of the burgeoning civil rights movement and president of the Southern Christian Leadership Conference (SLCC).

By the early 1960s, African Americans had seen gains made through organized campaigns that placed its participants in harm’s way but also garnered attention for their plight. One such campaign, the 1961 Freedom Rides, resulted in vicious beatings for many participants, but resulted in the Interstate Commerce Commission ruling that ended the practice of segregation on buses and in stations.

Similarly, the Birmingham Campaign of 1963, designed to challenge the Alabama city’s segregationist policies, produced the searing images of demonstrators being beaten, attacked by dogs and blasted with high-powered water hoses.Around the time he wrote his famed “Letter from Birmingham Jail,” King decided to move forward with the idea for another event that coordinated with Negro American Labor Council (NACL) founder A. Philip Randolph’s plans for a job rights march.

Thanks to the efforts of veteran organizer Bayard Rustin, the logistics of the March on Washington for Jobs and Freedom came together by the summer of 1963.

Joining Randolph and King were the fellow heads of the “Big Six” civil rights organizations: Roy Wilkins of the National Association for the Advancement of Colored People (NAACP), Whitney Young of the National Urban League (NUL), James Farmer of the Congress On Racial Equality (CORE) and John Lewis of the Student Nonviolent Coordinating Committee (SNCC).

Other influential leaders also came aboard, including Walter Reuther of the United Auto Workers (UAW) and Joachim Prinz of the American Jewish Congress (AJC).

Scheduled for August 28, the event was to consist of a mile-long march from the Washington Monument to the Lincoln Memorial, in honor of the president who had signed the Emancipation Proclamation a century earlier, and would feature a series of prominent speakers.

In preparation for his turn at the event, King solicited contributions from colleagues and incorporated successful elements from previous speeches. Although his “I have a dream” segment did not appear in his written text, it had been used to great effect before, most recently during a June 1963 speech to 150,000 supporters in Detroit.

Unlike his fellow speakers in Washington, King didn’t have the text ready for advance distribution by August 27. He didn’t even sit down to write the speech until after arriving his hotel room later that evening, finishing up a draft after midnight.

The March on Washington produced a bigger turnout than expected, as an estimated 250,000 people arrived to participate in what was then the largest gathering for an event in the history of the nation’s capital.

Along with notable speeches by Randolph and Lewis, the audience was treated to performances by folk luminaries Bob Dylan and Joan Baez and gospel favorite Mahalia Jackson.

Toward the end, with television cameras beaming his image to a national audience, King began his speech slowly but soon showed his gift for weaving recognizable references to the Bible, the U.S. Constitution and other universal themes into his oratory.

Pointing out how the country’s founders had signed a “promissory note” that offered great freedom and opportunity, he noted that “Instead of honoring this sacred obligation, America has given the Negro people a bad check, a check which has come back marked ‘insufficient funds.’”

At times warning of the potential for revolt, King nevertheless maintained a positive, uplifting tone, imploring the audience to “go back to Mississippi, go back to Alabama, go back to South Carolina, go back to Georgia, go back to Louisiana, go back to the slums and ghettos of our northern cities, knowing that somehow this situation can and will be changed. Let us not wallow in the valley of despair.”

Around the halfway point of the speech, Mahalia Jackson implored him to “Tell ’em about the ‘Dream,’ Martin.” Whether or not King consciously heard, he soon moved away from his prepared text.

Repeating the mantra, “I have a dream,” he offered up hope that “my four little children will one day live in a nation where they will not be judged by the color of their skin but by the content of their character” and the desire to “transform the jangling discords of our nation into a beautiful symphony of brotherhood.”

“And when this happens,” he bellowed in his closing remarks, “and when we allow freedom ring, when we let it ring from every village and every hamlet, from every state and every city, we will be able to speed up that day when all of God’s children, black men and white men, Jews and Gentiles, Protestants and Catholics, will be able to join hands and sing in the words of the old Negro spiritual: ‘Free at last! Free at last! Thank God Almighty, we are free at last!’”

King’s stirring speech was immediately singled out as the highlight of the successful march.

James Reston of The New York Times wrote that the “pilgrimage was merely a great spectacle” until King’s turn, and James Baldwin later described the impact of King’s words as making it seem that “we stood on a height, and could see our inheritance; perhaps we could make the kingdom real.”

Just three weeks after the march, King returned to the difficult realities of the struggle by eulogizing three of the girls killed in the bombing of Sixteenth Street Baptist Church in Birmingham.

Still, his televised triumph at the feet of Lincoln brought favorable exposure to his movement, and eventually helped secure the passage of the landmark Civil Rights Act of 1964. The following year, after the violent Selma to Montgomery march in Alabama, African Americans secured another victory with the Voting Rights Act of 1965.

Over the final years of his life, King continued to spearhead campaigns for change even as he faced challenges by increasingly radical factions of the movement he helped popularize. Shortly after visiting Memphis, Tennessee, in support of striking sanitation workers, and just hours after delivering another celebrated speech, “I’ve Been to the Mountaintop,” King was assassinated by shooter James Earl Ray on the balcony of his hotel room on April 4, 1968.

Remembered for its powerful imagery and its repetition of a simple and memorable phrase, King’s “I Have a Dream” speech has endured as a signature moment of the civil rights struggle, and a crowning achievement of one of the movement’s most famous faces.

The Library of Congress added the speech to the National Recording Registry in 2002, and the following year the National Park Service dedicated an inscribed marble slab to mark the spot where King stood that day.

In 2016, Time included the speech as one of its 10 greatest orations in history.

This article originally appeared in the Nashville Pride Group.