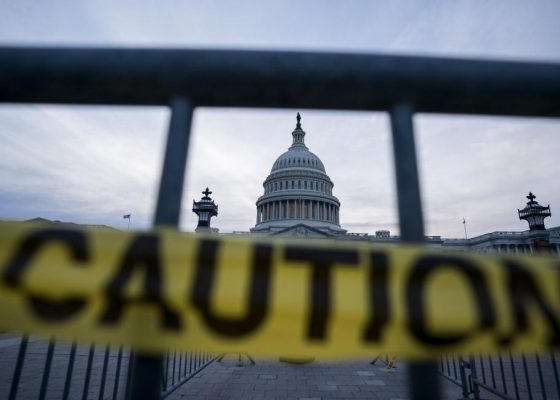 Jan. 7 (UPI) — Millions of Americans could have their food stamps cut off if the partial government shutdown continues into February, as a key federal agency is running out of money.

The shutdown, in its third week, will be the second-longest in U.S. history by the time Congress meets again Tuesday. President Donald Trump said there have been productive meetings with Senate minority leader Chuck Schumer and House Speaker Nancy Pelosi over the impasse to fund the government, which hinges on border security and a wall Trump wants built along the Mexico boundary.

In a tweet Sunday, the president said he’s no longer looking for a concrete wall.

“We are now planning a Steel Barrier rather than concrete,” he wrote. “It is stronger & less obtrusive. Good solution, and made in the U.S.A.”

The government agencies affected by the shutdown have either furloughed their workers or, if they are essential, have them working temporarily without pay.

The shutdown includes the Department of Agriculture, which funds the Supplemental Nutrition Assistance Program, or SNAP, the U.S. food stamp program. Congress approved $3 billion in emergency funds for SNAP, but that won’t cover all of February and would leave nothing for March. In September, the most recent month for which data is available, SNAP disbursements totaled $4.7 billion.

“There’s going to be rioting in the streets when they cut the stamps off,” Oklahoma store owner Robert Powell told NBC News. “Get your timber ready.”

Other programs that could be in danger include the Food Distribution Program on Indian Reservations and the Special Supplemental Nutrition Program for Women, Infants and Children.

The shutdown is also reaching into other key areas of American life.

Transportation Security Administration workers are calling in sick in record numbers, rather than work without pay. The so-called “blue flu” is leading to longer lines at airports because there fewer screeners.

“We are a paycheck-to-paycheck family,” Brian Turner, a Philadelphia TSA officer, told NBC News. “We have a mortgage payment. We have credit card payments. We have car payments. Utilities. And we also have childcare. So with half of our income gone, it is very concerning.”

TSA spokesman Michael Bilello said the sick calls are normal after the holidays, as are longer lines at airports.

Immigration courts are also down to a skeleton staff, postponing court dates and forcing judges to take on additional cases.

“You’re shutting down the immigration court over the issue of immigration,” said Judge Ashley Tabaddor, president of the National Association of Immigration Judges. “It’s going to be a huge disturbance to the orderly processing of the cases.”

Immigration and Customs Enforcement agents are still deporting immigrants but there’s no clear communication about how cases are moving forward. ICE press officials have been furloughed and aren’t responding to requests for information.

Monday, Trump said the country is “doing so well” and blamed Democrats and news media for making him “look as bad as possible.” Trump posted the tweets amid reports that he is considering declaring an emergency to get the border wall built.

“Congressman Adam Smith, the new Chairman of the House Armed Services Committee, just stated, ‘Yes, there is a provision in law that says a president can declare an emergency. It’s been done a number of times,'” he wrote. “No doubt, but let’s get our deal done in Congress!”