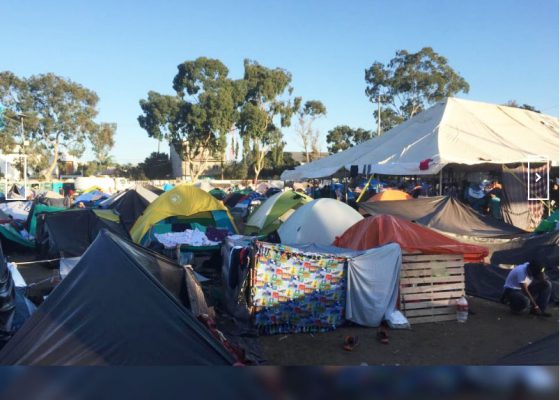 TIJUANA, Mexico, Nov. 26 (UPI) — Central American migrants camped in Tijuana, Mexico, on the border with San Diego, Calif., were subdued Monday, a day after U.S. authorities threw tear gas at them as they approached the international line.

Some migrants have given up on trying to seek asylum in the United States.

“I’m going to seek asylum in Mexico,” Osvin Herrera of Honduras told UPI. “And they are going to give me papers and a year’s work permit. If the United States doesn’t want us, I’m going to stay here. I want to go work in Guadalajara. I’m headed for my asylum interview right now.”

Herrera said he was a carpenter and painter in Honduras but he could not find any work.

Meanwhile, Tijuana Mayor Juan Manuel Gastelum issued a call for help from Mexico’s federal government. “We need food, water, blankets and a dignified place for people to sleep,” he said. “This is the responsibility of Mexico’s government.”

The mayor told UPI the city has no plans to evict the migrants from the camp, but said that was ultimately up to federal authorities.

Monday morning, many more migrants were lining up for food outside the camp than speaking to Mexican immigration authorities about asylum.

Several migrants told UPI they worry Mexican authorities will seek to remove them from the camp and deport them after Sunday’s march, the surge at the border, and the use of force in response by U.S. authorities.

“Do you know if they are going to deport us?” asked Melanie Murillo Hernandez, a university student from Honduras who is pregnant and seeking a better life for her child. “I don’t want to leave the camp as I’ve heard there are lots of police outside.”

Chief Border Patrol Agent Rodney Scott of the San Diego area defended the use of tear gas, telling CNN that migrants were throwing rocks or debris at officers. The San Ysidro Port of Entry was closed for several hours.

On Monday, city and federal police, accompanied by Mexican immigration agents, lined the streets outside the camp, visibly reinforcing the number of police present on Sunday.

“We haven’t been told if we are going to evict them or not,” one federal police officer said.

The has grown with new arrivals over the past several days. Hundreds sleep on sidewalks outside the Benito Juarez sports stadium. They sleep on the ground on cardboard boxes. Some have tents but most sleep under blankets in the open air. Many of the migrants have been in the camp for more than two weeks.

The health of migrants at the camp also appeared to be worsening, many with coughs and signs of upper respiratory infections. Health authorities have put up signs telling people not to spit, but the signs were ignored.

There are eight standpipes for men to shower in the open air, next to about two dozen portable toilets, many overflowing with sewage.