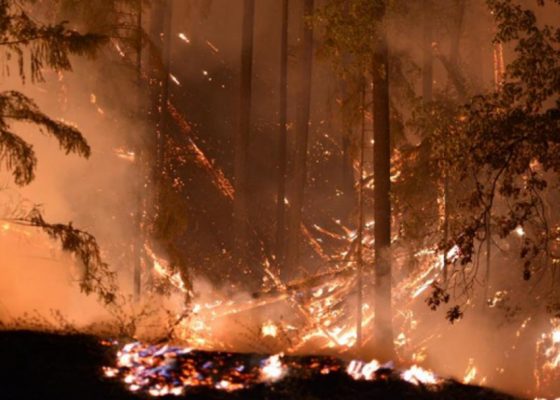 Six people died and seven are missing amid the Carr Fire after it struck Redding, Calif. Improved weather conditions Sunday led to 17 percent containment of the 95,000 acre fire. Photo by Jason Knight/EPA-EFE

The Carr Fire had destroyed about 100,000 acres in Northern California by Monday morning, officials said. Firefighters now have the blaze, which has so far killed 6, about 20 percent contained. Photo courtesy Cal Fire Shasta County

July 30 (UPI) — Firefighters in Northern California are getting a better handle on the deadly Carr Fire, but they still have a long way to go, authorities said Monday.

Six people have died so far in the wildfire, which started a week ago and took a surprising turn into the city of Redding late last week. It prompted the evacuation of nearly half the city’s 92,000 residents.

Shasta County Sheriff Tom Bosenko said the sixth reported death was of an unidentified man who received an evacuation notice but did not leave.

Officials said two firefighters are among the dead and seven people are still missing.

“We’re feeling a lot more optimistic today as we’ve begun to gain some ground instead of always being on the defensive,” said Cal Fire commander Bret Gouvea.”You’re going to see re-population in the city of Redding very soon.”

One negative factor Monday and Tuesday could be temperatures above 100 degrees Fahrenheit.

Nearly 1,000 structures, including 723 homes, have been destroyed and nearly 200 other structures have been damaged, Cal Fire said in a Monday morning report. Entire subdivisions of Redding were flattened by the fire.

More than 3,400 fire personnel, 374 fire engines and 17 helicopters are involved in fighting the Carr Fire.

The California National Guard has installed roadblocks in the most heavily affected parts of Redding amid reports of some looting. Three evacuation centers were established and some evacuees slept on outdoor cots Sunday night.

Residents still have not been allowed to return to their homes. Crews have repaired some gas lines, but utility officials said the return of service for all residents will be slow. When they are allowed back, officials said they will return in phases.

“We don’t want to allow [residents] back in, then if conditions change, have to re-evacuate,” Bosenko said. “We can’t open the floodgates. We have to do it in segments.”

“Let the fire personnel make it safe before you go back,” Leonard Moty, a county supervisor who evacuated the area, said.

The fire has been fueled by dry, excess vegetation and hot surface temperatures turned it into highly flammable grasslands.

“The air pulls in the fire and creates its own wind,” said AccuWeather meteorologist Evan Duffy.