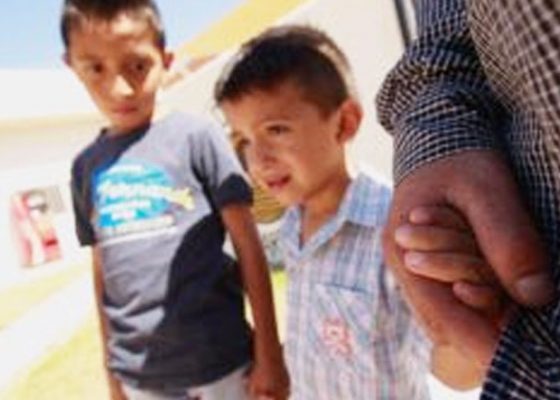 The roots of Trump’s child-detention policy are in American history.

As recently as last year, Republican Congressman Steve King was considered an outlier when he opined that “we can’t restore our civilization with someone else’s babies.” Now the Trump administration has endorsed this politics of blood and soil, full bore.

“They’re not innocent,” says our president of children torn from their parents at the border. “These aren’t people” is how he describes adolescents about whom he knows nothing but their nationality. Immigrants “are animals, and we’re taking them out of the country at a level and a rate that’s never happened before,” Trump adds. Their children will be put in “foster care or whatever,” according to the White House chief of staff, Gen. John Kelly.

Those children may come from abroad, but they are our babies. They represent the legacy of American policies that go back decades. After all, it was the United States that financed the infamous US Army School of the Americas and trained genocidal warlords, such as Efraín Ríos Montt, who went on to destabilize all of Central America. If countries like Guatemala and Honduras have fallen into chaos since the 1980s, it’s partly because those wars took a toll on their social structures: the trauma of families wiped out and entire villages disappeared. The refugees at our southern border are part of the blowback from the displacement of hundreds of thousands of people still seeking safety from US-financed violence.

War is one way to kill children; putting them in concentration camps is another. “Casa Padre” is where some of these children have been taken. Once a Walmart in Brownsville, Texas, the building has been converted to house nearly 1,500 boys under the age of 18. In the hallway is a huge graffito of Donald Trump’s head, oddly disembodied, looming larger than a minuscule image of the White House, above which he floats, godlike, in the sky. The mural includes a quote from The Art of the Deal: “Sometimes by losing a battle you find a new way to win the war.”

Attorney General Jefferson Beauregard Sessions III has tried to wrap this barbarity in the sheep’s clothing of not just law but God’s law, invoking the Pauline Epistle of Romans 13. Sessions, whose very name summons two of the most notorious slaveholders of the Confederacy, uses a feint common in the antebellum South: It is God’s law, divine will, the “natural” order of things—not a policy dreamed up by President Trump and enacted at his command—that compels US government agents to treat immigrants like inventory.

Over decades, slavery hardened Americans to the tears, pleas, terror, and grief of a trade that put human beings on the auction block, took babies from their mothers and sold them to strangers. That system relied on rationalizations we encounter still: Certain classes of human beings are not “really” human; they do not feel pain to the same degree as “more civilized” classes; these “others” are incorrigibly predisposed to prevarication (or “acting,” as Ann Coulter recently dismissed the images of bereft toddlers). Above all, “they” are always kept at a distance. This “they”-making obliterates due process, equal protection, and individual justice. It justifies racial and ethnic profiling, and punishes people in the plural.

We fail to recall America’s dark history at our peril. After the Civil War, juvenile-reform policies encouraged the removal of children from people deemed unfit, “feeble-minded,” “promiscuous,” or epileptic. These parents were disproportionately Irish immigrants, people of color, or unmarried women. During the first part of the 20th century, policy-makers championed not only the removal of “defective” black children from their equally “defective” parents, but also the confinement of those children in adult prisons. Until recently, states sterilized thousands of women—and some men—for reasons that included ridding their tax rolls of the undeserving poor. Today, our government has grown indifferent to the cruelties of the so-called school-to-prison pipeline, arresting kindergartners and routinely sentencing very young teenagers as adults.

The legacies of these policies are all around us. Still, our government argues that the deliberate separation of parents and children will serve as a disincentive to others seeking to cross the border. That alone is a crime against humanity. The United States is the only member of the United Nations that has not ratified the Convention on the Rights of the Child—a text worth reading for anyone who wonders why the world has condemned the Trump administration in recent weeks. Moreover, the construction of detention camps has been outsourced to profiteers who have snatched babies away so carelessly that their identities have been lost in the shuffle.

We know that children subjected to this kind of trauma suffer catastrophic damage to the very architecture of their brains. Children who were abandoned in Romanian orphanages, for example, were found to have grown up with less cerebral white and gray matter than their peers raised by parents. Or look at our own foster-care system: It is deeply scarring, even when children are separated from their families to protect them from danger. Forty to 50 percent of children who age out of foster care become homeless within 18 months. And fully half of the nation’s homeless population were foster children at some point.

We understand all of these things, and yet we are not supposed to scrutinize this manufactured tragedy as it unfolds. The camps are off-limits to the public. Even members of Congress have been denied entry without two weeks’ notice—and the locations of many of the detention centers have been withheld, making them hard to inspect or hold accountable. We go about our daily business, not looking because we do not want to know. We pass the abandoned Walmart, this parking lot for disposable despair, this factory for future fury. And we quarantine this all-American banality of evil as the problem of “someone else’s babies,” whose torture we disown.

Patricia J. Williams is the James L. Dohr Professor of Law at Columbia University School of Law and a columnist for The Nation.