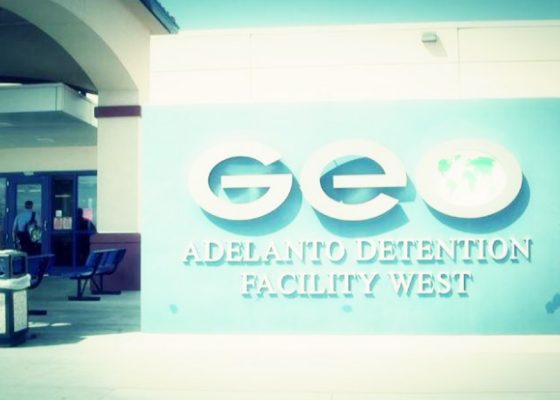 The windswept town of Adelanto, in the High Desert near San Bernardino, recently became the second Southern California city to announce it would cut ties with U.S. Immigration and Customs Enforcement. Since 2011, Adelanto has operated one of the largest and most troubled immigration detention centers in the country, the 1,940-bed Adelanto Detention Facility. Its contract is scheduled to terminate June 25.

California currently holds about 4,500 detainees for ICE, more than any other state except Texas. But under pressure from local activists and Sacramento’s scrutiny of detention conditions, cities and counties are increasingly severing their connections with ICE. Earlier last month the city of McFarland, citing the state’s sanctuary laws and demands from the California State Auditor, terminated its contract with the federal agency for the operation of the Mesa Verde Detention Center in Bakersfield. And last week Orange County Sheriff Don Barnes said his department planned to give ICE four months’ notice that the county would no longer jail some 700 ICE detainees at its Theo Lacy and James Musick facilities.

Adelanto is a city of 34,000 and among the state’s poorest, with a long history of political corruption. It has three prisons, including the ICE facility.

Adelanto, however, is a detention center operator in name only. It holds an Intergovernmental Service Agreement with ICE, an arrangement the agency uses to quickly establish detention centers without public competitive bidding processes. The GEO Group, the nation’s largest for-profit prison company, runs the Adelanto center, and pays the city about $1 million annually.

But in late February the state auditor released a report slamming Adelanto and two other cities for failing to properly oversee the detention centers, prompting city officials to reconsider their ICE contract.

“The City of Adelanto has been closely monitoring the recent decisions made by other local agencies to stop housing ICE detainees,” City Manager Jessie Flores texted Capital & Main. “Based on those observations and the issues raised in the State Auditor’s report, the City and the GEO group determined that it was in the parties’ interest to terminate the underlying agreements.”

Adelanto’s decision to sever ties with the GEO Group may actually allow the company to expand its operations at the detention facility.

The auditor recommended legislation to take effect immediately that would require cities to adequately oversee the detention centers for which they contract.

Adelanto city manager Flores said in his text that it would be too costly for his cash-strapped and understaffed city to adequately oversee the detention center.

The city’s decision to sever ties with ICE is not, however, the immigrant rights victory it might appear. Adelanto’s move may actually allow the GEO Group, which owns and operates the detention center, to expand its operations.

State law forbids California cities from increasing detention space under their existing ICE agreements. But if ICE contracts directly with a private detention company like GEO, there is no such constraint.

In a statement, ICE spokeswoman Lori Haley wrote that “ICE plans to continue to use the Adelanto ICE Processing Center as long as a viable contract is in effect with the facility.” The agency was able to contract directly with the GEO Group to keep the Mesa Verde Detention Center in Bakersfield open when the city of McFarland pulled out earlier this year.

Indeed, GEO Group President George Zoley personally lobbied for Adelanto to terminate its ICE contract, according to Adelanto City Councilwoman Stevevonna Evans. On March 27, Evans told Capital & Main, Zoley met with her and the city’s mayor, Gabriel Reyes. The GEO executive argued that opting out of the city contract would allow the detention center to expand. Evans said she was the only councilmember to oppose the city’s decision, contending that the city should take responsibility for the center it helped establish. (Attempts to reach Mayor Reyes for this article were unsuccessful.)

“We said we’d take care of the detainees. We subcontracted to GEO and we were hands-off and that was wrong in my opinion,” Evans said.

Adelanto is currently defending two lawsuits–one by National Public Radio that demands documents related to detention conditions; another suit, filed by former detainees, alleges that in 2017 eight of them were beaten, pepper sprayed and denied medical attention for their resulting injuries after engaging in a peaceful protest.

In a statement, Freedom for Immigrants, a group that has monitored conditions at Adelanto for seven years, applauded the city’s decision to sever ties with ICE. It called for a “just and proper closure” of the facility and urged city officials to halt any expansion. “Adelanto ICE Processing Center uses prison tactics in order to violate the rights of immigrants detained there,” former Adelanto detainee Carlos Hidalgo said in the statement. “Their primary goal is to make money off our misfortune by holding us indefinitely. Nobody should ever have to endure this type of abuse. It’s time to shut down this prison once and for all.”