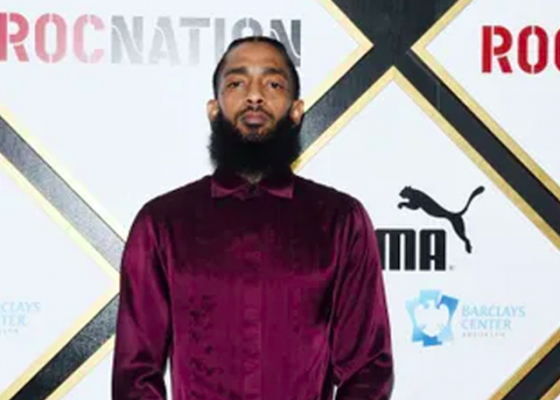 A suspect is identified in Nipsey Hussle’s fatal shooting as Mayor Garcetti asks for the public’s help with the investigation.

Eric Holder, identified as a suspect in Nipsey Hussle’s slaying, in an undated photo provided by the Los Angeles Police Department. (LAPD)

A suspect in the killing of rapper Nipsey Hussle is in custody, authorities said, ending a two-day manhunt. Eric Holder, 29, was arrested in Bellflower on Tuesday afternoon.

Los Angeles police detectives went to the L.A. County sheriff’s station in Lakewood to verify the identity of the suspect and confirmed to The Times that the man in custody was Holder

The arrest came after a woman who authorities allege was Holder’s getaway driver turned herself in.

L.A. Police Chief Michel Moore said Tuesday that Holder got into a verbal altercation with Hussle on Sunday afternoon. “Mr. Holder walked up on multiple occasions and engaged in conversations” with the rapper, Moore said. “He came back armed with a handgun” and opened fire.

Moore said investigators believed the shooting was the result of a “personal matter between the two of them” but would not elaborate.

Moore and Mayor Eric Garcetti both acknowledged a recent uptick in violence, particularly in South Los Angeles, and noted that Hussle’s legacy was one of peace.

“Nipsey Hussle represents the enormity of the lives we have lost,” Moore said.

Graphic video from a surveillance camera shows a gunman walking up to Hussle and two other men in front of the shop the rapper owned in a Slauson Avenue strip mall. The gunman then opens fire and Hussle falls to the ground as the other two men run from the gunfire.

“Nipsey Hussle,” Garcetti said, “was an artist who touched our city and lives far beyond the City of Angels, throughout the country and the world.”

The mayor said the worst way to answer the killing was with more violence and that he hoped “the community comes together” to achieve the goals the rapper had set in recent years. “This is about young people of color being able to have opportunities in their lives,” he said.

Hussle “was a tireless advocate for the young people of this city and of this world,” he said, “to lift them up with the possibility of not being imprisoned by where you come from or past mistakes but the possibility of what comes in the future.”

The L.A. County coroner’s office said Monday that Hussle died of a gunshot wound to the head.

Police released Holder’s name Monday night, when a stampede at a memorial vigil for Hussle led to several injuries.

Eric Holder, identified as a suspect in Nipsey Hussle’s slaying, in an undated photo provided by the Los Angeles Police Department.

Eric Holder, identified as a suspect in Nipsey Hussle’s slaying, in an undated photo provided by the Los Angeles Police Department. (LAPD)

While a member of the crowd spoke of the late rapper at the memorial, dozens of people gathered for the event outside Hussle’s store started running away. People fell on top of each other as they tried to flee, some of them losing their shoes in the scramble to get away.

Numerous police cars and ambulances raced to the scene as officers yelled at people to leave the area.

Robert Arcos, an LAPD assistant chief, told The Times that a fight appeared to have started the stampede after one person possibly pulled out a gun.

The Los Angeles Fire Department took 19 people to hospitals: two people who were in critical condition, including one hurt in a car accident; two people with serious injuries; and 15 with non-life-threatening injuries. The majority of the patients suffered injuries related to being trampled when the crowd rushed away.

A Los Angeles Times reporter at the scene was among those trampled. Reporters in the area said on social media that authorities had said at least six people were stabbed, which is thought to have caused or contributed to the chaos.

Hundreds of novena candles left in memory of Hussle — who was shot and killed Sunday in broad daylight in a burst of gunfire that left two other people wounded — were crushed as people fled. The shards injured several people, and many were limping as they tried to find their way around police barricades. It remains unclear whether anyone was actually stabbed or if they were injured by broken glass.

Moore praised the restraint of the police officers who tried to control the situation.

Bottles were thrown at some officers, and a sergeant had to have stitches for a wound to his hand.

The LAPD is working with community leaders to clean the area, protect the memorial and make it safe for visitors, Moore said.

Hussle made no secret of his early life in a street gang, saying in a 2014 interview with YouTube channel Vlad TV that he had joined the Rollin’ 60s, a notorious Crips gang clique, as a teenager.

“We dealt with death, with murder,” he told The Times in 2018. “It was like living in a war zone, where people die on these blocks and everybody is a little bit immune to it. I guess they call it post-traumatic stress, when you have people that have been at war for such a long time. I think L.A. suffers from that because it’s not normal yet we embrace it like it is after a while.”

Just before the shooting, Hussle tweeted: “Having strong enemies is a blessing.”

Moore put Hussle’s killing in the context of a recent uptick in violence, noting that there had been 26 shootings and 10 homicides in the city since the previous Sunday.

“That’s 36 families left picking up the pieces,” Moore tweeted. “We will work aggressively with our community to quell this senseless loss of life.”

Hussle had been set to meet with Moore and Police Commission President Steve Soboroff on Monday to talk about solutions to gang violence.

“Throughout the years, as he fostered success in his music career, he chose … to reinvest and try to address the various underpinnings that fostered this environment. It’s just terrible,” Moore said Monday.

Richard Winton is a crime writer for the Los Angeles Times and part of the team that won the Pulitzer Prize for Public Service in 2011. Known as @lacrimes on Twitter, during 20 years at The Times he also has been part of the breaking news staff that won Pulitzers in 1998 and 2004. He won the ASNE Deadline News award in 2006. A native of England, after getting degrees from University of Kent at Canterbury and University of Wisconsin-Madison, he began covering politics but chose a life of crime because it was less dirty.

Jaclyn Cosgrove is a Metro reporter at the Los Angeles Times. Previously, she worked as the health reporter at the Oklahoman. She was selected for a 2015-16 Rosalynn Carter Fellowship for Mental Health Journalism. For her fellowship project, she explored the barriers that low-income, uninsured people with mental illnesses face in finding treatment. Cosgrove is originally from Arpelar, Okla., and graduated from Oklahoma State University.

Angel Jennings is a reporter for the metro section of the Los Angeles Times. She covers issues that affect residents in South Los Angeles. Since joining The Times in 2011, Angel has written for the Business section and covered education.  She is a native of Washington, D.C., and graduated from the University of Nebraska.