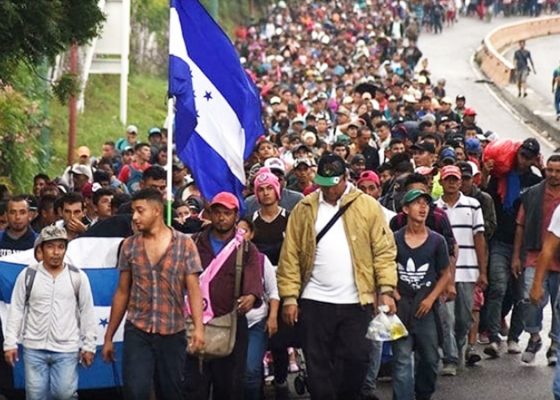 On Twitter, President Trump threatened to engage the military to guard the southern border of the Unites States.
The warning came in light of over 3,000 migrants from El Salvador, Honduras and Guatemala heading toward the U.S. border. Trump also threatened to cut all aid payments to the three countries over the illegal immigration issue.
Those countries, commonly referred to as the Northern Triangle, were rocked by civil wars in the 1980s, leaving a of trail of broken families and murdered civilians.
The region has remained entangled in corruption, drug trafficking, and gang violence, despite tough police and judicial reforms. The U.S. has given the countries government billions of dollars in aid over the past decade. But, it is believed that current U.S. immigration policies have exacerbated threats to regional security.
El Salvador, Guatemala, and Honduras consistently rank among the most violent countries in the world.
Gangs in those countries extort the poor, small business owners, and even government officials, and those who refuse to participate, often, pay a hefty price.
The citizens of this region deserve to live in peace. They deserve asylum and protection especially if U.S. could assist.
Trump went off on Democrats and the leaders of Latin American nations, seeking to deflect blame and mitigate political damage by riling up his loyal followers just weeks before the midterm elections.
Ironically, even with all of his posturing, legally the president may not even be able to act on the threats without Congressional approval. In recent campaign rallies, Trump has riled up to rally conservatives by falsely insinuating that Democrats are in favor of “open borders” and that they favor increased crime.