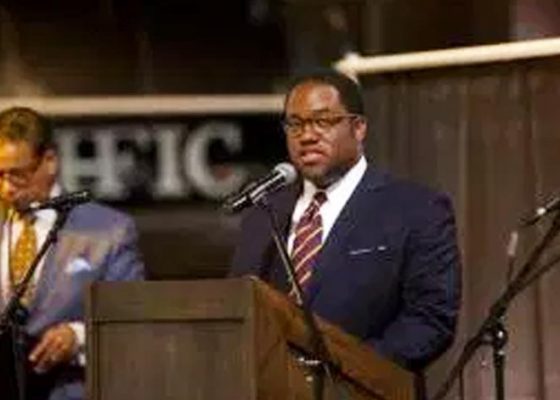 Sebastian Ridley-Thomas, 30, was hired by USC as a professor of social work and public policy after abruptly resigning from the Assembly in December, saying unspecified health problems left him no choice but to step down as he needed an extended period of time to recuperate.

USC also gave Ridley-Thomas, who lacks a graduate degree, a scholarship to pursue a master’s program in social work, sources familiar with the matter told the Los Angeles Times.

The unusual arrangement has come under scrutiny in recent weeks as the scandal-plagued university attempts to adopt more transparency in its affairs, according to the newspaper. Administrators launched an investigation and Sebastian Ridley-Thomas was fired in July, according to The Times’ sources.

After the internal probe, USC approached the U.S. Attorney’s office in Los Angeles and told federal prosecutors it had concerns about a recent $100,000 donation from a campaign fund controlled by Mark Ridley-Thomas, The Times reported.

The gift to USC’s Suzanne Dworak-Peck School of Social Work ended up in the account of a nonprofit group outside the university run by Sebastian Ridley-Thomas, according to sources and public records, the newspaper reported.

Mack Jenkins, head of the public corruption and civil rights section at the U.S. Attorney’s office, confirmed that a lawyer for USC briefed him on the Ridley-Thomas matter and referred it “for criminal investigation,” The Times reported. He declined further comment.

Sebastian Ridley-Thomas’ attorney, Lance Olson, told The Times his USC admission was “based on his own merits” and went through “normal channels.” As for Ridley-Thomas’ faculty job, Olson said USC’s offer letter stated his client was hired with the “enthusiastic recommendation of the faculty.”

A lawyer for Mark Ridley-Thomas told The Times the supervisor was “surprised to learn that his donation to USC has become an issue.”

“We do not believe that it raises any legal or ethical issues, and it had nothing to do with his son’s scholarship or employment at the university,” attorney Stephen Kaufman told The Times.

USC’s board of trustees learned of Ridley-Thomas’s donation last month and were working with federal authorities, board chair Rick Caruso told The Times.

“I am disturbed and concerned by these allegations and people will be held accountable for their behavior, as appropriate,” Caruso said in a statement issued by USC.

USC has faced a series of scandals over the past few years.

More than 200 women have come forward over the past several months accusing former longtime USC health center gynecologist George Tyndall of sexual misconduct. The scandal prompted USC President Max Nikias to step down, although he has not officially resigned his post.

In April 2016, Carmen Puliafito stepped down as dean of the USC Keck School of Medicine after it was revealed he had partied with underage girls and provided drugs to his girlfriend, who was a prostitute. The California medical board later ordered Puliafito be stripped of his license to practice medicine.

In November 2016, Dr. Rohit Varma, a noted ophthalmologist, was named dean to replace Puliafito. However, in October 2017, however, he also resigned amid a report that 15-years-prior, USC reached a financial settlement with a female researcher who accused him of sexual harassment.

“No institution wants to be scandal-plagued, but USC is right now, and it’s way beyond the athletic department this time,” Meister said.